Items after the jump:
- Phils batters vs. projections
- Phillies stats vs. 2011, and vs. the Braves
- NL Standings and team stats
- Milestones: Rollins, Utley, Victorino, Pierre, Halladay, and Howard's race to 300

Phillies Hitters vs. Projections
This now includes OPS over the last 30 and last 7 days.
After showing signs of getting hot, Victorino is still struggling. Rollins and Pence have cooled off recently too, although they've both had key hits in recent games.
. 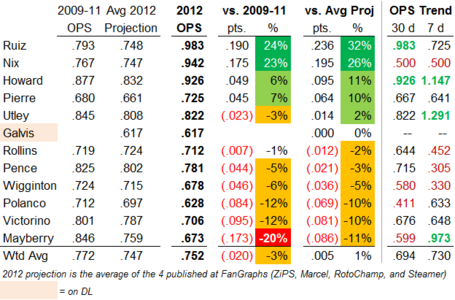 Phillies Team Stats vs. 2011 and vs. the Braves

The Braves have one of the better offenses, in the NL, with the 4th highest wRC+, and 3rd most runs per game. They're patient, seeing a lot of pitches (2nd), and drawing walks (3rd), but when in hitters counts the've tended to hit away even more than the Phillies have (13th in pitches taken in those counts). They don't sacrifice much (15th), and are 14th in steal attempts.

Their pitching is about league-average, although of course their bullpen (2nd lowest FIP) is much better than their starting rotation (14th). 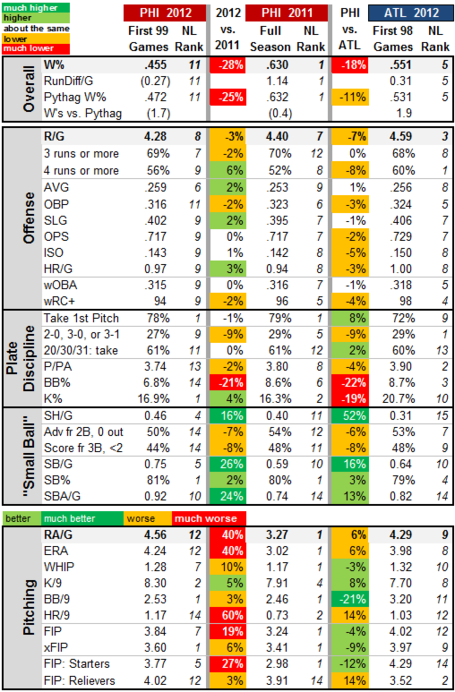 Atlanta is five games behind Washington in the East, but would get the 2nd wild card spot if the season ended today. 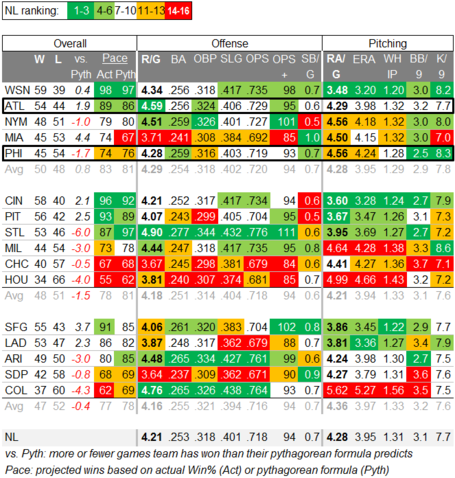 Shane Victorino
- He needs 8 more hits (103 total) to become the 34th player in Phillies history to reach 1,000 with the team. Of course, with a possible trade looming, there is a very good chance that these three games against the Braves will be the last chance he has to get there.

Vasquez is included because he hasn't officially retired. He pitched for the Marlins last year and was 8-3 with a 2.15 ERA in the second half, and was even named NL Pitcher of the Month in September (5-0, 0.71). But he's not playing this year and is not planning to play any time soon. More from Rob Neyer.

Erik Kratz
- His home run on Tuesday not only began the Phillies' remarkable comeback from a 6-1 deficit, but also allowed him to briefly join an elite group of only 4 other players who had three hits in a season with all three being home runs. Alas he wrecked it all with his first-inning RBI single on Wednesday and then compounded the error with two doubles, including one in the 10th which became the winning run.