Share All sharing options for: Freebasing, Selling Out: Braves 6, Phillies 1

Perhaps we can forgive Cole Hamels not being at his best. It's been quite a week, and fresh on the heels of signing a hefty contract with the Phillies, it's gotta be tough going shoveling the money out of the way in order to get the penthouse door open to get to the team plane. It's a team of cripples, after all, he's been pretty much strapping on his back to get him to that payday, so the exhale should have been expected.

Yet on the heels of four straight dramatic wins, this game in Atlanta, mere days before the trade deadline, was stacking up as critical. Would the Phillies keep their late momentum rolling? With their wheeler-dealer general manager taking a keen interest in the weekend, and a shot at the second wild card spot dwindling, would their ace shine forth in the foetid stank of this rotten, overripe season, and in Atlanta, no less?

Hamels was bad tonight, walking six (a career high) and giving up five runs (three earned) in five innings en route to a dull, hangoverish 6-1 loss at the hands of the Braves, the team the Phillies are trying to hunt down for that selfsame playoff spot. They might have at least moved out of last place in the N.L. East. Instead, Hamels and the team put on a clinic of Doing It Wrong, with bad defense, untimely hitting, and a nauseating reminder that the roster is stocked with dudes like Mike Fontenot, Ty Wigginton, John Mayberry Jr., and Juan Pierre. But hey, when it's $7,000 per pitch, why not dazzle everyone and spread it around?

Thank goodness the Olympic Opening ceremonies gave us the must-see TV we were all hoping for. 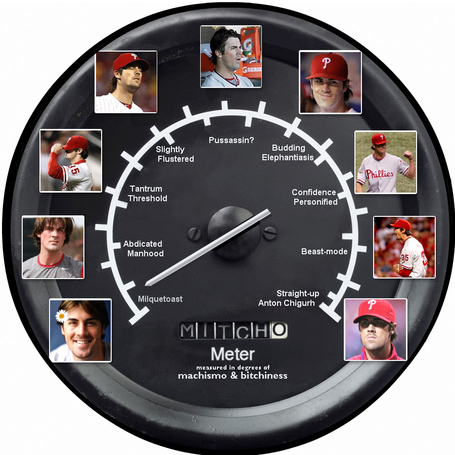