Items after the jump:
- Chooch among the best of the past 2 1/2 years
- Phillies players among the league leaders
- Why is the pitching so much worse this year?
- Phillies and comeback wins
- Phillies and situational splits
- Phils batters vs. projections
- Phillies stats vs. 2011, and vs. the Mets
- NL Standings and team stats
- Milestones: Rollins, Hamels, and Papelbon

Chooch: best since 2010
With his surge this season, Carlos Ruiz has been one of the best-hitting catchers of the past two and a half years. What's more, and while defensive ratings for catchers are less refined than for other positions, Ruiz has the highest WAR (either fWAR or rWAR) among all catchers in the majors since the start of the 2010 season:

Speaking of Chooch's awesomeness, at the half-way point, these are the Phillies on the NL leader boards -- rankings are in the NL unless otherwise noted:

Why is the Pitching so much worse than last year?
(updated and expanded from the previous Stat Notes)

The Phillies have allowed 97 more runs this year than they would have at this point with 2011's team ERA. Why is that? I've taken a crack at categorizing the increases/decreases in runs allowed by comparing ERA, FIP, and xFIP (as well as unearned runs) in 2011 and 2012.

Below are stats by pitcher in the two years (Oswalt's 23 starts and Blanton's 8 are combined in 2011): 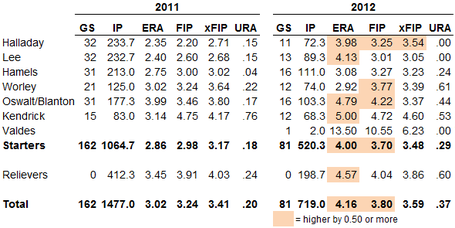 And this is how the changes in the various rates translate into higher or lower runs allowed in 2012: 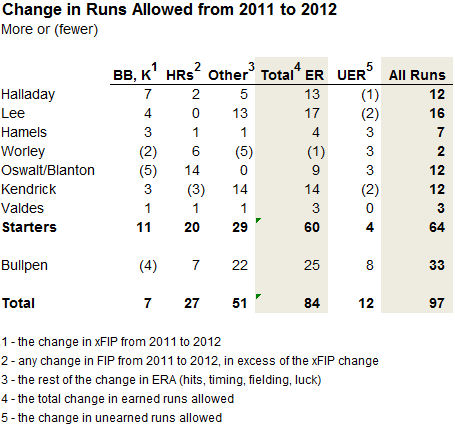 Finally, the Philles have allowed 12 more unearned runs so far this year than they would have allowed at the 2011 rates, and 8 of those have been given up by the bullpen.

Exactly. The Phillies have trailed gone into the 8th inning 34 times this year, and have not come back to win any of those games. Now, that's pretty bad, and in fact it's one of the worst comeback records in the NL this year. Only Milwaukee has been equally inept at coming back when trailing in the 8th, and they actually have won a game they trailed entering the 9th inning:

The "problem", if you wish to call it that, for fans of the 2012 Phillies is that the team has been extremely good at coming back in recent years. If you compare their comebacks to the NL average since 2007, they have come back far more often than a typical team. Just last year, for example, they trailed going into the 8th inning 55 times and came back and won 12 of those games, which was twice as many as the average team would be expected to win. I suspect this was largely a function of the good pitching, which kept games close and meant that fewer runs were needed to overcome those deficits.

The shaded rows below show the additional games the Phillies have come back and won beyond what the NL average would indicate. This could be adjusted for the fact that the Phillies have been an above average team (and therefore SHOULD come back somewhat more often), and that would reduce the extra wins by a half to one in each year: 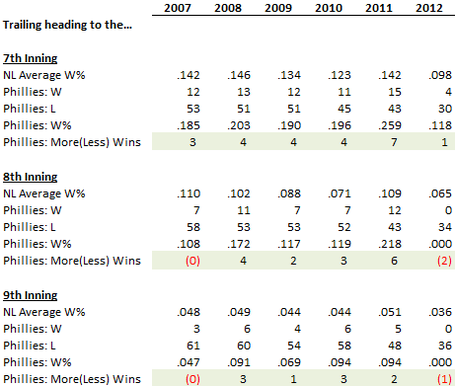 Which brings us to splits and how the 2012 team is performing in key situations. Below are the Phillies' various offensive splits so far in 2012, where they rank in the NL, and how they compare to the 2011 team (click to enlarge):

I'll highlight a few others:

- First Pitch: they swing at the first pitch the 2nd least in the NL (behind only the Mets), but when they do, they are not very good at it.
- RISP: OPS is down 6% from last year in those situations, but they are still in the middle of the pack in the NL, ranked 9th (they were 3rd last year). The NL average line in RISP situations is .246/.334/.390. The Phillies have done somewhat better with RISP when there are 2 outs, ranking 6th.
- Man on 3rd, less than two out: much worse than last year, and 14th in the league; they ranked 7th in 2011
- Late and Close: 4th highest OPS in the NL, and 9% better than last year
and Innings 7-9: Best OPS in the NL in the late innings, which, along with "Late and Close", seems to contradict...
- High Leverage: 11th in the NL, 2% worse than last year

Obviously some are over and some are under, but overall the Phillies have outperformed their OPS projections thus far. 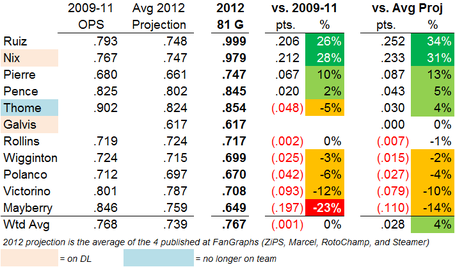 The Mets lead the NL in the % of games that they score 3 runs or more. They don't have much power, but they are possiby the most patient team in the league, leading in taking the first pitch, pitches per plate appearance, and BB%. 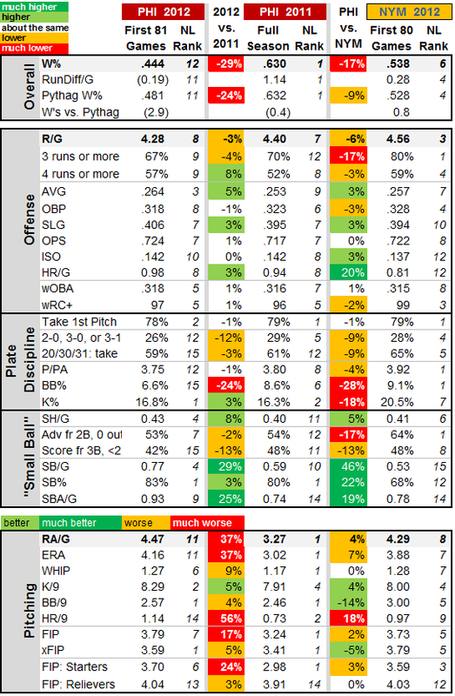 The Mets are in 2nd place in the NL East (3.5 games behind Washington), and only a half game back in the Wild Card race (behind Pittsburgh and LA). Their pitching is most often credited for their success this season, but while the pitching is 7th in ERA and 5th in FIP, their hitting is 3rd in both runs per game and wRC+. 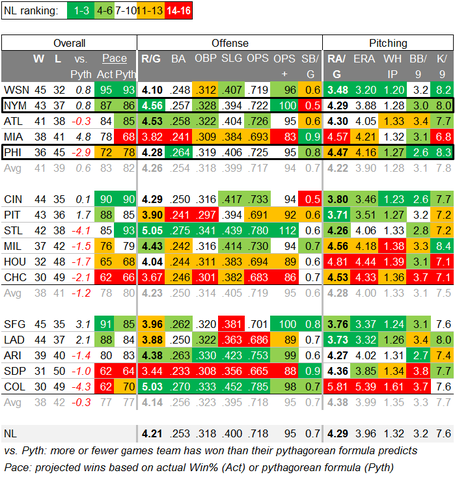 - Rollins' steal on Friday tied him with dead-ball era outfielder Sherry Magee for 3rd on the Phillies' list at 387, behind Billy Hamilton (508) and Delahanty (412). Rollins has been the Phillies' leader for the post-1920 era ever since he passed Larry Bowa's 288 in 2008. Surprising perhaps, but Richie Ashburn only stole 199 with the Phillies, partly because he played in an era where there was much less stealing. He led the league once, in his 1948 rookie season, with 32.

Cole Hamels
- Hamels' next start (17th of the year, scheduled for Thursday) will tie him with Eppa Rixey from the 1915 pennant winner for 11th on the Phillies all-time list.
- Two more starts (18 total) will tie him with Dick Ruthven and Tully Sparks (1897-1910) for 9th.