I hate boats. Like I really hate boats. Cruise ships, yachts, canoes, I hate 'em all. I won't even sit on an inflatable raft in a wave pool, because if I do, that pool's going to be populated with whatever it was I decided to scarf down for breakfast that morning. And then I have to sit through the embarrassment of everyone staring at me as they sprint for the deck, and I run the risk of my skin melting when they fail to notice I'm still dry-heaving on the tube before they dump however many canisters of chlorine shock into the water. But the absolute worst has got to be those damn fishing boats...it's making me queasy just thinking about it.

The one time I decided to go deep-sea fishing was when I was 15 years old, and we went about 40 miles off the coast of the Outer Banks...into 12-foot swells. I'll spare you the details, but suffice it to say I lost about 10 pounds on that trip and they made me wash the deck when we got back. I swore to myself that as soon as I hit dry land, I would never go deep-sea fishing again as long as I lived. I was doing well on that front...then I watched tonight's game. It's all I can to do to look at the game summary and not yak on my keyboard. I can't promise you that I'll make it through the recap without doing just that, but I'll do my best.

Take your Dramamine and follow me after the jump.

Tonight was another 2012 Cliff Lee Special: After being staked to an early 1-0 lead (thanks in part to Jimmy Rollins's hustle, I might add), Lee pitched a gem for the first 6 innings, striking out 8 Reds batters, walking none, and giving up 6 hits. Three of those hits came in the sixth inning, where Lee loaded the bases with no one out on three straight singles. But thanks to the defensive wizardry of Kevin Fransden on a force-play at home and a dexterously turned double play by Chase "Man Guy" Utley and Rollins, he got out of the sixth with the Reds still scoreless.

Then the seventh inning happened...

After allowing a leadoff double to Scott Rolen and issuing a walk to New Jersey native Todd Frazier, Lee gave up an RBI single to Ryan Hanigan. John Mayberry's throw to the plate was cut off by Ryan Howard, and when I say cut off, I really mean it clanged off his glove and got away from him, allowing the runners to reach second and third. One sacrifice fly from Zack Cozart and RBI single from Drew Stubbs later, Lee was out of the game, and the score was now 3-1 Cincinnati.

Fortunately for Lee, he would not be on the hook for the loss, as the Phillies rallied to tie the game in the bottom of the seventh against Sean Marshall on Jimmy Rollins's two-run, one-out double. I mention it was a one-out double because the very next batter, Juan Pierre, laid down a bunt with runners on second and third. I don't know if he was just trying to reach or if he was trying to squeeze home a run, but you know that runner on third? That was Ty Wigginton. He tried to score. He did not. The game was still tied at 3 a piece. Man Guy would pop out to the right side to end the inning.

Did it just get warmer? Why am I sweating all of a sudden?

Anyway, Antonio Bastardo came in to pitch the eighth. After retiring the first two batters with ease, Bastardo gave up a go-ahead home run to Frazier. If you needed any proof that the evil of 2012 was alive and well, you have it. Frazier had no business even swinging the bat on this pitch. It was a couple off inches off the inside corner of the plate and a couple more inches below his knees. How he even squared it up at all is beyond me. But he did, and the Phillies were behind again, 4-3.

Hmmm, maybe those eggs I had for breakfast had just expired...

The bottom of the eighth came up, and who should show up but our good friend, Jonathan Broxton. And wouldn't you know it, he was still the same caring, sharing Broxton we've always known and love. He even decided to give us the tying run by letting Domonic Brown score from first on a Fransden two-out RBI triple. The game was all tied back up.

Papelbon comes into the game to preserve the tie, and wouldn't you know it, he serves up a first-pitch, go-ahead, vomit-inducing home run to Cozart, which was all the Reds would need to win. Aroldis Chapman pitched a scoreless ninth for his 30th save.

Fangraph of I need a new keyboard 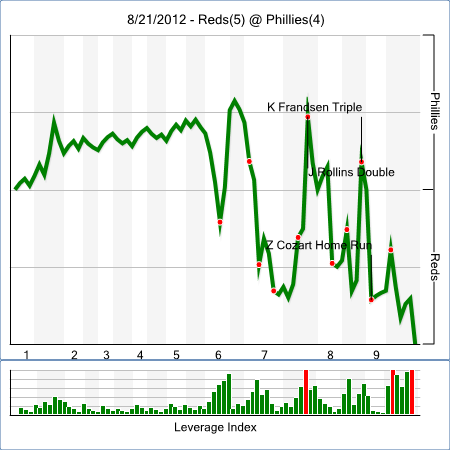