Share All sharing options for: Phillies 4, Reds 3 (11 innings): Clouds of Mystery Pourin' Confusion on the Ground

Welcome to late August 2012, when the Phillies can't even seem to gin up much of a show for a good old-fashioned pitcher's duel. And while most rational observers of the team might argue that the Phillies were victims of circumstance tonight, this 2012 season has made us all want to reflexively slap rational observers in the face. Hard. And then just blame the Phillies anyway. Really, they deserve it.

In this season moist with losses, a lovely N.L. Cy Young candidate matchup between Johnny Cueto and Cole Hamels on what was supposed to be a lovely late summer night instead started with Cory Blaser, a minor-league umpire, behind home plate, under a blackly humorous cloud that eveloped Citizens Bank Park, and virtually nowhere else in the greater metropolitan area, in a sopping, isolating isolated shower.

Hamels started off the game with a 30+ pitch inning in the driving rain, as he consistently got ahead of the Reds hitters but had difficullty putting them away. As the Reds ticked off foul ball after foul ball, Zach Cozart and Drew Stubbs led off the game with ground ball singles to left. After Hamels struck out Jay Bruce, he walked Ryan Ludwick to load the bases before Todd Frazier hit a fielder's choice ground ball to score the first run. Phillies third baseman Kevin Frandsen appeared to have the force play on the ball, but elected to take the second out at first base, and just like that, it was a very 2012 1-0 first inning deficit. Huzzah!

So the game chugged soggily to the sixth with the same 1-0 score, when the Reds used their "two ground ball singles to lead off the inning" formula to threaten again. To be fair, the second "single" hit by Ryan Ludwick, would have been competently fielded by someone competent at shortstop who would have, in turn, with capable teammates, converted it into a double play. But this was all hypothetical and inevitable when Todd Frazier stepped up next and sent a double to the base of the angly part of the left-centerfield wall that centerfielder Laynce Nix.

All right, stop there. If you didn't see the game, what happened next?. That centerfielder Laynce Nix:

a) made a spectacular diving catch on, headlong into the wall, breaking his nose;
b) belly-flopped on the grass and missed entirely;
c) chased to the fence, then allowed the carom to go between his legs for an error, thus allowing both Juan Pierre to field the ball, both runners to score, and Frazier to wind up on third.

Answer after the jump...

Silly! This was a trick question. Of course a) is wrong. Only someone like Ty Wigginton is capable of such heroics. And it would be far too entertaining to watch b), so we were left to watch c) humidly as the Reds took a 3-1 lead. Hamels then flexed on the Reds, stranding Frazier while Phillies fans everywhere who kind of gave a damn wondered how such a great pitching matchup was gifted with Michael Martinez at shortstop and Laynce Nix in center. It's all a guy can do to not move the needle thusly: 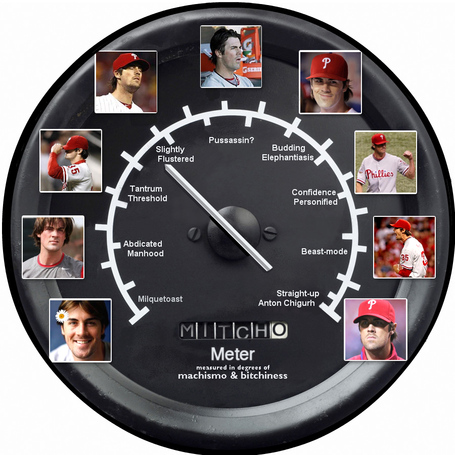 Cueto, for his part, was mildly effective but skittish, having difficulty of his own on the wet mound and doing stuff like needing way too many pitches to put away Martinez. He had to weave his way around baserunners in scoring position in the second, third, and fifth before leaving the mound with nobody out in the sixth, after a Ryan Howard walk and Domonic Brown double. Then Nix (oh, that's why he was in the game) and RBI Man of the Month Eric Kratz hit consecutive sacrifice flies to left to pull the Phillies to 3-2.

In the eighth, the Phillies had a measure of BABIP'd revenge as they hit three consecutive one-out ground ball singles to load the bases. Jimmy Rollins, pinch hitting, then hit yet another sacrifice fly to plate Brown, whose lanky and languid strides to the plate resemble nothing so much as a dual-hinged whirligig. But this is a quibble. Tie game!

Meanwhile, this was fun to watch: Philippe "Le Chevalier de la Pomme de Terre" Aumont made his first major league appearance with the Phillies in the eighth inning, one of five scoreless one-inning stints thrown by the bullpen by Roseberg (7th), Papelbon (9th), Horst (10th) and Valdes (11th).

Neither team, at that point, seemed to have much give a damn to put this game away, the Phillies being the more culpable of the two. In both the ninth (Brown: inning-ending ground ball double play with the bases loaded) and tenth (Schneider and Pierre with second and third situations, baleful sigh fails), the clutch hitting failed the team, and the goat-like presence of WIlson Valdes stared at both the prospect of 19 innings and a 3 a.m. bedtime. The 11th too, was heading nowhere good after Frandsen singled, Utley doubled, and Howard walked intentionally. Well, that part was great. But Dom Brown hit into a force out at home, Looked like a night free of Clutchy McSlugger and his clubhouse chicken-and-beer ingesting ways.

But wait! There in the distance! Shunned for so long on the bench! Why, it's John Mayberry Jr., tonight's not-ready-for-primetime hero, He can single through the left side! We can win this game and split the series, and tie the mighty Reds! We can hit the hay before 1 a.m.! All hail, John Mayberry Jr. You are the new king of the post-ASB wins that the Phillies seemed allergic to winning all this dreary year.

"I feel like I've been in a fight and lost," Phillies manager Charlie Manuel said in the postgame press conference, as the Phillies pulled even at two games apeice in this 2012 Should Of Been Playoff Series. Amen to that, brother.