Items after the jump:
- Chase Utley: Still among the best
- Phillies' paths to the postseason
- Phils batters vs. projections
- Phillies stats vs. 2011, and vs. the Mets
- NL Standings and team stats
- Milestones: Rollins joining exclusive company; also Howard, Utley, Pierre, Halladay, and Hamels


Chase Utley: Still among the best

Well, when he can play, of course. We've covered that Chase Utley is arguably the second best at his position in the past 50 years, and that he was a top second baseman as recently as last year despite a drop-off in power. Well, his power is back (.203 ISO vs. career .215), and he's putting up 120 wRC+ in spite of a paltry .250 BABIP, with a line drive rate that is above his career average (21.2% vs. 20.3%). The fielding is still very good, and overall, he's still playing at a 6-WAR full season level. In fact, even in what will look to a casual observer like the worst season of his career, he will probably still come close to earning his $15.3 M salary (he would need ~3.4 WAR). Now if he can just manage to stay on the field for something approaching a full season. 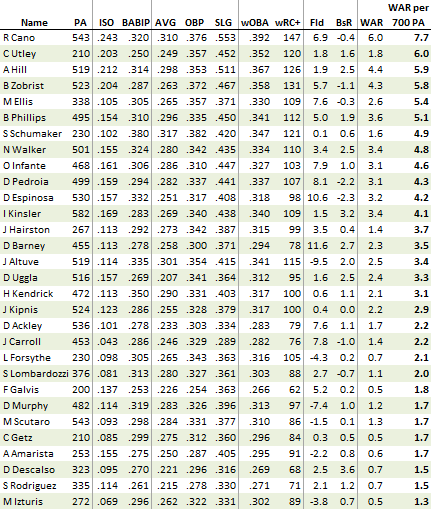 So you're telling me there's a chance... Yeah!

Okay, we know it's remote. It's extremely remote. But what would actually have to happen in order for the Phillies to get into the postseason? Let's look at two scenarios, which I've helpfully given names to: 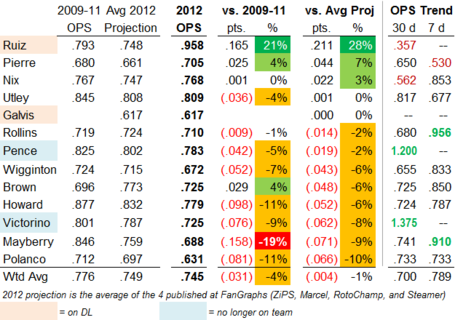 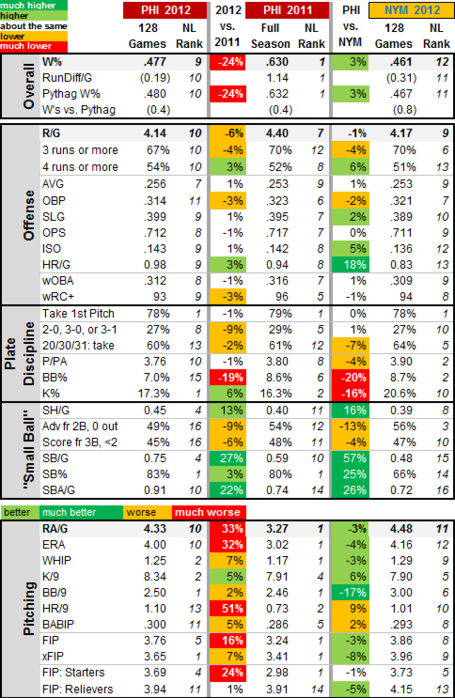 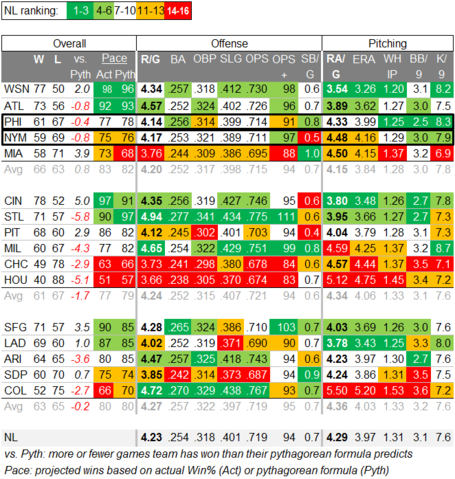 Jimmy Rollins
- Rollins' home run on Sunday tied him with Johnny Callison (185) for 11th in Phillies history.
- His next triple (6th) will tie Sam Thompson for 3rd on the Phillies list at 106.
- 4 more stolen bases will make him the 3rd player in Phillies history to reach 400, joining (the original) Billy Hamilton (508) and Ed Delahanty (411).
- He needs 10 hits to reach 2,000, and barring injury he should get there some time in September.
- Reaching 400 steals and 2,000 hits will also make him just he 24th player in history with 400 doubles, 400 steals, and 2,000 hits. There are only 7 in history with that combination and also 200 HRs (Rollins is at 185).
More on Rollins' climb up the Phillies record book in this recent milestones post.

Chase Utley
- His next Sacrifice Fly (3rd this year) will join Bob Boone, Von Hayes, and Mike Lieberthal for 6th on the Phillies list at 43 (Rollins just moved ahead of that group and is in 5th with 44).
- 2 more extra base hits (20 this year) will make him the 12th Phillie in history to hit 500 with the team.
- 5 more will tie him with Cy Williams for 11th on the Phillies all-time list at 503 (Howard passed Williams earlier this month and stands at 507). Pat Burrell is next at 518.
- He needs 4 home runs to reach 200 for his career.
- 5 more doubles (13 total) will tie Granny Hamner for 10th in Phillies history at 271.

Juan Pierre
- Pierre steal on Sunday tied Maury Wills for 19th on all-time list at 586. Next is 19th century outfielder Dummy Hoy at 594.

By the way, stolen base rules were in constant flux in the 1800s, and steals totals are inflated by today's standars, but nevertheless those were the rules at the time. From wikipedia:

In 1887, the stolen base was given its own individual statistical column in the box score, and was defined for purposes of scoring: "...every base made after first base has been reached by a base runner, except for those made by reason of or with the aid of a battery error (wild pitch or passed ball), or by batting, balks or by being forced off. In short, shall include all bases made by a clean steal, or through a wild throw or muff of the ball by a fielder who is directly trying to put the base runner out while attempting to steal." The next year, it was clarified that any attempt to steal must be credited to the runner, and that fielders committing errors during this play must also be charged with an error. This rule also clarified that advancement of another base(s) beyond the one being stolen is not credited as a stolen base on the same play, and that an error is charged to the fielder who permitted the extra advancement. There was clarification that a runner is credited with a steal if the attempt began before a battery error. Finally, batters were credited with a stolen base if they were tagged out after over running the base.

In 1892, a short-lived rule was added crediting runners with stolen bases if a base runner advanced on a fly out, or if they advanced more than one base on any safe hit or attempted out, providing an attempt was made by the defense to put the runner out. The rule was subsequently ended in 1897.

In 1898, stolen base scoring was narrowed to no longer include advancement in the event of a fielding error, or advancement caused by a hit batsman.