If there's one thing Philadelphia knows, it's food. This town pretty much revolves around the food service industry. Just watch a national broadcast of a Phillies game on ESPN. All they ever discuss is the Philly cheesesteak and how wonderful it is. And it is. I love a great Philly cheesesteak; it's one of the most satisfying things I've ever eaten in my life. But there's so much more to the Philadelphia region than just some greasy, fatty...and delicious sandwich. Philadelphia does all kinds of food, and they do it as well as anyone in the business. But if there's one...genre, if you will, of food they do better than any other here, it's Italian food. Living in South Jersey just a few miles away from the city, I was practically raised on Italian food, and there's no Italian dish that I find more satisfying than a good old-fashioned plate of spaghetti and meatballs. Unfortunately for me, I went to college in the South, where good Italian food is pretty difficult to come by. Don't get me wrong, Southerners make amazing food. The barbecue is out of this world. But the best Italian food you're likely to find with any ease can really only be found at Olive Garden. It's not great, but it'll get the job done. That's what it felt like to watch the Phillies and Braves engage in a full-blown slugfest this evening at Turner Field. It wasn't quite the same as it would have been at the Bank, but it was still pretty satisfying.

Order your salad and then jump.

Ryan Howard got the bonanza started tonight with a first-pitch home run off of Braves lefty Mike Minor, staking the Phillies to an early 1-0 lead. Unfortunately for the Phillies, Roy "Doc" Halladay played more the role of chef than of doctor tonight, serving up a couple of two-run home runs in the fifth inning to Martin Prado and Freddie Freeman, which would knock him out of the game and bring in lefty reliever Jeremy Horst. The Phillies would tie up the game in the top of the sixth, but Horst, who hadn't allowed a single home run yet this season, would give up a solo shot to the Braves resident Hollister model in the bottom of the sixth. You would think Uggla wouldn't want to indulge in such fattening food; his clothes are already getting a bit too tight as it is...

The bullpens would lock horns for the next couple of innings, with Bastardo, Aumont, Durbin, Venters and O'Flaherty all recording scoreless innings.

We come to the ninth, in a 5-4 game, with the Braves shutdown closer Craig Kimbrel coming in to give the Phillies their check and a couple of those chalky peppermints that are always found in strange places, like the lint filter of your dryer or underneath the passenger seat of your car. But Erik Kratz, a Philadelphia area native, wasn't quite satisfied yet, and Kimbrel had no choice but to oblige, giving up a game-tying solo shot on an 0-2 pitch. Extra innings, here we come.

Or, I guess I should say, extra inning. John Mayberry made sure of that. With two out and runners on the corners, Mayberry took the first-pitch spicy meatball (a.k.a. hanging slider) and peristaltically deposited it into the left field stands for digestion by the fans.

With a three-run lead to work with, Papelbon closed out the night with a strikeout of Eric Hinske, earning his 250th career save. 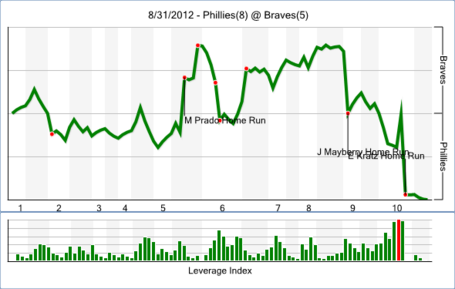