Share All sharing options for: The Strange Phillies Career of Joe Blanton

In sharp contrast to erstwhile rotation mates Roy Halladay and Cliff Lee, newly traded Phillies pitcher Joe Blanton wasn’t hailed as a savior when he showed up in 2008, and he’s not being mourned as a symbol of the team’s impending decline now that he’s gone, in a waiver trade to the Dodgers finalized this past Friday. What we’ve mostly gotten are jokes about Joe’s weight and recollections of the home run he hit in Game Four of the 2008 World Series—which admittedly was one of the three or four greatest baseball moments I’ve ever experienced in person.

But Blanton’s Phillies career is fascinating both in how the pitcher evolved during his tenure and the changes that the team underwent while he was in its employ. After the jump, we'll dig in, but to start with, take a look at Blanton’s numbers with the Oakland Athletics and the Phillies.

Blanton arrived in Philadelphia as a pitcher who’d give you innings, keep the ball in the park and limit walks, but couldn’t strike anyone out. He leaves as something of a strikeout artist (20th of 56 NL pitchers with enough innings to qualify on ESPN.com’s leader board) whose single biggest problem is… keeping the ball in the park, tied with Mike Minor of the Braves for the NL lead in homers allowed with 22. His transformation as a pitcher during his tenure with the Phillies strikes me as a funhouse reflection of what happened to the team over the same time.

By the time the Phillies acquired Blanton in July 2008, the team had made something of a habit of adding a starter around the deadline. They’d picked up Cory Lidle in 2004 from the Reds, got Jamie Moyer from the Mariners on a waiver trade in 2006, and added Kyle Lohse from Cincinnati in 2007. Not to put too fine a point on it, the Phillies crushed it in every one of those trades: they acquired Lidle for Elizardo Ramirez (-1.1 career Wins Over Replacement), Javon Moran and Joe Wilson, neither of whom ever reached the majors; got Moyer for Andrew Barb and Andy Baldwin, neither of whom ever reached the majors; and brought in Lohse for Matt Maloney (-0.4 career WAR).

Even so, the acquisition of Blanton from the A’s for infielder Adrian Cardenas, pitcher Josh Outman and outfielder Matt Spencer was almost universally panned by Phillies bloggers—including, I’m embarrassed to say, this one. Some of it probably was disappointment that the Phillies weren’t in on C.C. Sabathia, the big prize that summer; some of it was probably fear of Billy Beane’s legendary acumen; some of it was probably just the basic prospect fetishizing to which too many of us are prone. But it seemed madness to deal away the .300-hitting line drive machine Cardenas and almost-ready lefty Outman for a guy who looked very vulnerable outside of the Oakland Mausoleum and was on the brink of getting expensive.

Needless to say, we were embarrassingly wrong. Blanton wound up winning 34 games for the Phillies in the regular season, plus two more in the 2008 playoffs; Baseball Reference has him worth 2.5 WAR in his Phillies tenure. Outman has been worth 1.3 WAR in his career according to B-R (2.2 for the A’s before his terrible season with the Rockies this year, but he’s thrown less than a third as many innings as Blanton. Cardenas only reached the bigs in 2012, for the Cubs after the A’s waived him last winter, and has a 56 OPS+ thus far. He’s still just 24, but for now it doesn’t look like he’ll be haunting the Phillies.

Before the 2010 season, GM Ruben Amaro Jr. raised some eyebrows by extending Blanton on a three-year, $24 million deal that would buy his age-29 through 31 seasons. Blanton would enter that season as the Phillies’ #4 starter behind Roy Halladay, Cole Hamels and J.A. Happ. The move made more sense, however, upon closer examination of what Blanton did during the 2009 season, when he was pretty clearly the Phillies’ best starter for most of the season.

Blanton typically is a slow starter: for his career, he’s got a 43-51 record and 4.72 ERA in the first half, compared to 38-20, 3.83 after the all-star break (something else the Dodgers surely noticed). He wasn’t so hot to start 2009 either, pitching to an ass-ugly 7.11 ERA (insert snacking joke!) through May 21 of that year. But in 18 starts between May 26 and September 5, Blanton pitched to a 7-3 record and 2.59 ERA, striking out 99 in 121.2 innings. By then, Amaro had brought in Cliff Lee and Pedro Martinez, who led the staff into October. But Blanton’s final season numbers of 12-10, 4.05 were solid enough for a mid-rotation starter on a contending team, and at age 29 it wasn't entirely unthinkable that the borderline ace of 2009 might be the guy who showed up over the three years that followed.

Of course, that wasn't how it worked out. Blanton has to be considered a disappointment over the term of his contract extension with the Phillies. He was a bit hit-unlucky in 2010, as opponents hit .324 off him (Blanton’s career BABIP is .302, right around the average), but his 175 innings were a career low for a full season. The next year, which Blanton began as the fifth wheel to the Four-Ace rotation of Halladay, Lee, Cole Hamels and Roy Oswalt, was much worse: hampered by a mysterious arm injury he initially tried to pitch through, Blanton landed on the disabled list in mid-May with a 5.50 ERA and came back only in September to pitch seven innings.

Blanton’s re-emergence this year as Robin Roberts’ impoverished grandson has been well observed. The Dodgers probably looked at Blanton’s home/road splits this year and figured that he’d benefit by the switch from Citizens Bank Park, where he’s surrendered 14 of those 22 homers, to Dodger Stadium, which generally suppresses offense. But while Blanton’s given up more souvenirs at CBP, his ERA of 4.59 there is exactly the same as his road ERA. (Also fun to note: entering this weekend, Blanton had pitched exactly 66.2 innings at home and away this season, allowing 34 runs in each venue, and has issued exactly 9 walks both at CBP and on the road. Now that’s consistency!) His batting average against at home is lower than the road mark, and his strikeout rate is higher at CBP. It’ll be interesting to see if some of those homers become doubles or triples in Los Angeles, and if so whether the Dodgers really will be better off.

It’s probably appropriate to end with a word about that home run in Game Four. Blanton was the first pitcher to go yard in the Fall Classic since Ken Holtzman of the A’s in Game Four of the 1974 Series, and just the thirteenth ever to do so. Two pitchers homered twice in their World Series careers: the Cardinals’ Bob Gibson in 1967 and 1968, and Dave McNally of the Orioles in 1969 and 1970. McNally had nine regular season home runs among 97 total hits in his 14 year career. Gibson homered 24 times in his career and finished with a .206 average in his 17 seasons. Even Holtzman, who played about half his career after the advent of the designated hitter, had two homers and a .163 average in 667 regular season career plate appearances.

Then there’s Blanton. In 229 career plate appearances during the regular season, he has a grand total of zero extra base hits. NONE. His 21 hits are all singles. When Cole Hamels homered earlier this season, the only surprise was that it had taken him six seasons to reach the seats; when Cliff Lee went yard twice last year, it prompted suggestions of differing degrees of seriousness that he should be hitting a lot higher than ninth in a scuffling Phils batting order. But Joe Blanton is definitionally the guy for whom the DH rule was created; there’s nothing entertaining about watching him hit.

Except that once. I don’t know how you’d exactly calculate the odds, but Blanton’s World Series homer has to be one of the more unlikely events in baseball history. For me, sitting way up in the bleachers with my wife and my brother, screaming my head off, it was also the moment when I really became convinced we were going to win it all. For that reason, I’ll always root for the pitcher known as Cupcakes.

I took a picture of the bat Joe used to hit the homer last October when I visited the Hall of Fame. 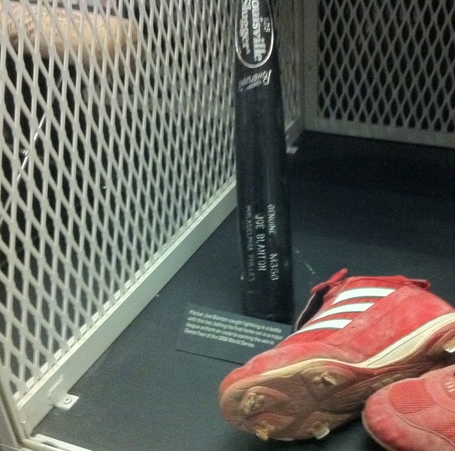