Share All sharing options for: Phillies Sell-out Streak Ends at 257

The Phillies sellout streak of over three years ended last night after 257 consecutive regular season games. Including the 16 home games of the last three postseasons, the total was 273. 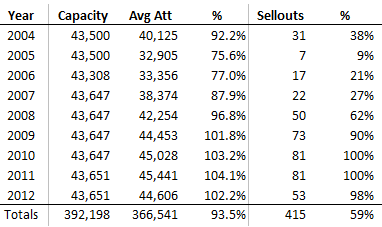 Note: there's no official list of sellouts. This uses 43,500 as the cutoff for all years; there has only been one game -- referenced below -- between 43,500 and the seating capacity. 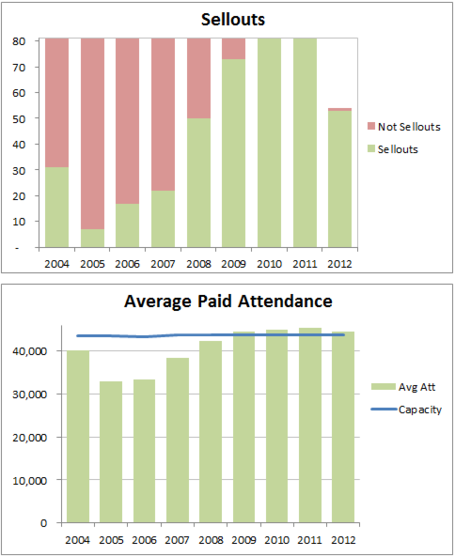 It was the longest sellout streak in National League history, surpassing the 203-game string of the Colorado Rockies in 1995-97. The only longer streaks in MLB have been the 455-game streak by the Cleveland Indians from 1995 to 2001, and the current streak of 772 sellouts at Fenway Park. In fact, Boston recently broke the American professional sports record of 744 games compiled by the Portland Trailblazers in 1977-95 (which ended only when they moved to a larger arena).

The Phillies still lead the majors in home attendance, as well as average overall attendance including their road games.

While the team has other sources of revenue, with $132 million of gate receipts and $249 million total revenue, the Phillies appear to get about half of their revenue from the gate, so obviously it's something the organization will be monitoring closely.

Finally, yes, there is lots of gaming of the numbers in order to call a game a "sellout". It makes a team seem more popular, makes a ticket to the game seem more exclusive and desirable, and gives the marketing department one more tangible attribute to sell to advertisers. However it doesn't seem that the Phillies have engaged in this to any greater extent than other teams. Two articles that take a look behind the curtain:
- Demystifying When a Sellout Isn't a Sellout, and Ticket-Selling Tricks of the Trade
- Phillies' sellout streak at 232, and counting