Phillies Stat Notes -- The Pitching is Back; Full Year Projections

Share All sharing options for: Phillies Stat Notes -- The Pitching is Back; Full Year Projections

Items after the jump:
- Phillies' paths to the postseason
- ERA by Month: starters and bullpen
- Hitting stats per 700 plate appearances
- Phils batters vs. projections
- Phillies stats vs. 2011, and vs. the Marlins
- NL Standings and team stats
- Milestones: Howard and the fewest games to 300; also Rollins, Utley, Halladay, and Hamels, and Lee

Two paths to the postseason:

There are three main things here: Phillies continue surging, and Cardinals and Dodgers struggle. There is <50% but not trivial chance that any of these three would happen. All three of those happening is what makes this scenario "crazy".

This is more of the "Phillies control their own destiny" scenario, and requires one truly unlikely thing to happen.

Now, the Phils have only lost 6 of their last 21, and ALL SIX of those were either by one run or in extra innings, so while 18-4 would require tons of luck, it's not like asking the Marlins to go 18-4 at this point. (The Phillies have also won a number of close games in that stretch, of course).

For each of these teams, there is a magic number of Phillies wins and the other team's losses that would clinch the Phillies finishing ahead of them:

Pitching Is Back to Where We Expected

The Phillies are 32-21 since the All-Star Break, despite the fact that they've been scoring fewer runs:

They've been winning because their pitching is back to where we expected it would be all year long:

Also, it's interesting how the performance of the bullpen (in terms of results, at least) has closely matched that of the starting pitching. ERA by month: 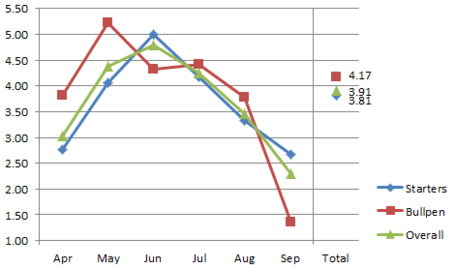 I have to admit that after a steady diet of wOBA, OPS+, and other rate stats, I occasionally I need a fix of counting numbers. And, given the way this team, especially, has lacked full time players, the way these are most useful to me is in the form of a full season projection. Below are what the Phillies' stats to date would look like extrapolated to 700 plate appearances (Pence and Victorino are based on only their Phillies stats). 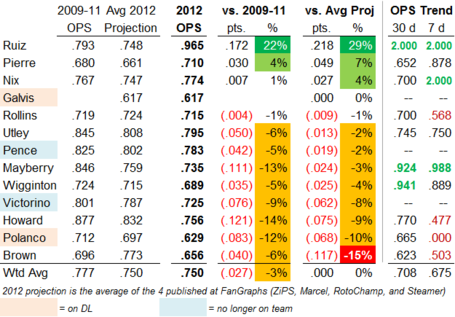 Phillies Team Stats vs. 2011 and vs. the Marlins 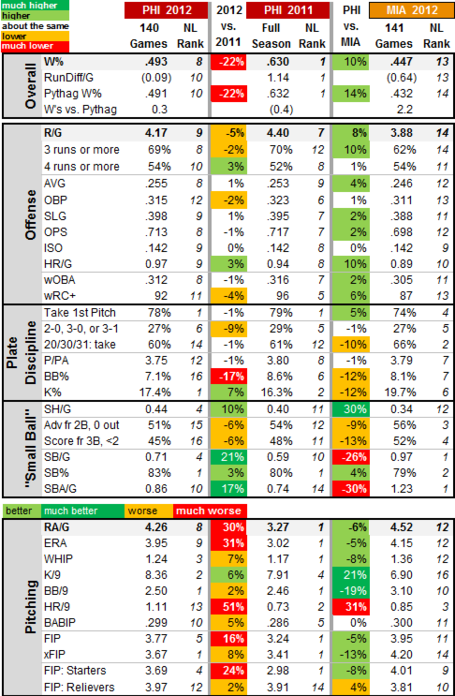 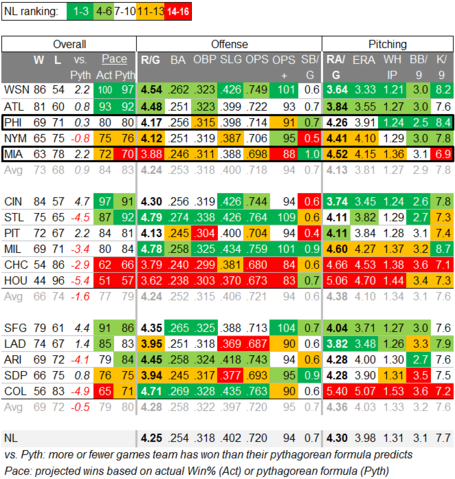 Cole Hamels
- Hamels' next start (28th) will tie him with Jim Bunning for 8th most starts in Phillies history, with 208.

Cliff Lee
- Needs 9 strikeouts to reach 1,500 for his career, which will make him the 26th active pitcher to do so.

Jonathan Papelbon
- His next save (33rd) will tie Dave Righetti for 31st All-time with 252.

Michael Martinez
- The worst offensive seasons in history are safe from Martinez for the moment. With his recent hot streak, his OPS+ is now up to 12, third lowest among players with 70+ PAs this year, behind Chris Coghlan and Jack Wilson (both at 8).
- By the way Martinez is one of ten players to have appeared at 6 or more defensive positions this season. One of those ten (Brent Lillibridge, who is on his 3rd team of 2012), has played at 7.