For the amusement of all, I have put together a list of the remaining schedules for the Cardinals, Dodgers, Pirates, Brewers, and Phillies, including the winning percentages for each opponent remaining as well as the average winning percentage remaining. It's meant as a useful reference tool, not as a commentary on the Phillies' chances, which remain low. The "strength of schedule" is purely a winning percentage issue, which of course ignores things like relative strengths of schedule to this point, whether teams have over or under-performed their run differentials, etc. It's a quick and dirty. Just accept it. If you're really that nerdy, put together your own.

After the link (large graphic). 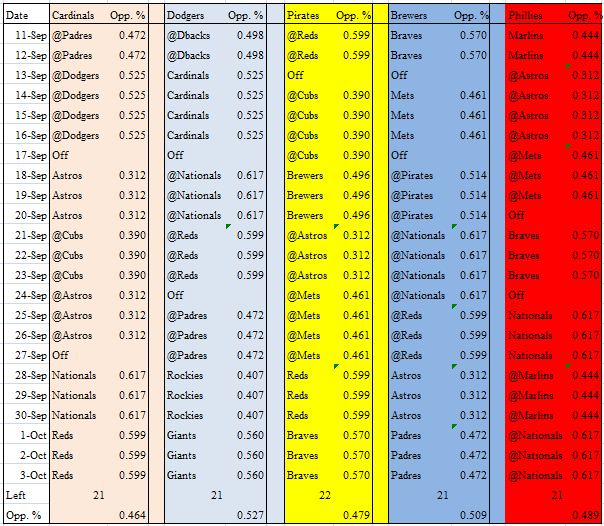 The Cardinals, with a small lead and a really easy schedule, are clearly in the pole position, while the Dodgers and Brewers have a much tougher path. Things get easier for the Pirates, and the Phillies may continue to surge, though the last 12 games get much tougher.

As always at this time of year, there is some question about how hard teams that are out of it will play. The Orioles clearly relished the role of spoiler in 2011, and it is hard to imagine that the Giants, Reds, and Nationals would not lick their chops at the chance to knock the Dodgers, Cardinals, and Phillies out. Still, do you really think the Braves will play hard during the last three games at Pittsburgh?