Items after the jump:
- Phillies' paths to the postseason
- Comparing double play combinations
- Phils batters vs. projections
- Phillies stats vs. 2011, and vs. the Astros
- Current stats vs. stats at the ASB
- NL Standings and team stats
- Milestones: Howard to 300, Rollins, et al

These two paths to the postseason are now looking somewhat less "crazy" and "insane" than when we first started tracking them here. 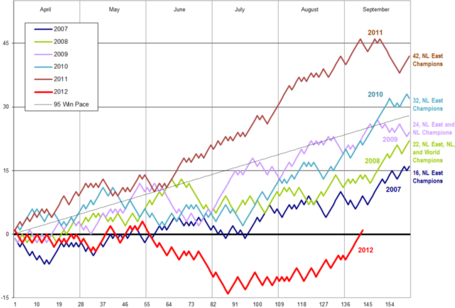 Based on (f)WAR, Rollins and Utley have been one of the best double-play combinations in MLB this year, even before adjusting for Utley's lost playing time:

When adjusting for playing time (i.e. WAR per 162 games), there's a tight bunch at the top: 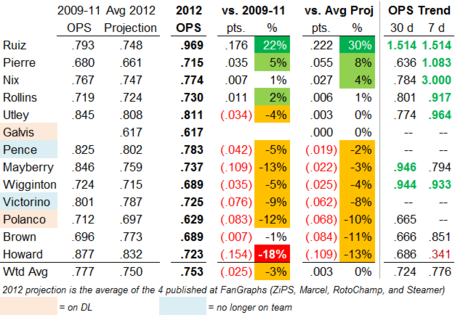 Phillies Team Stats vs. 2011 and vs. the Astros 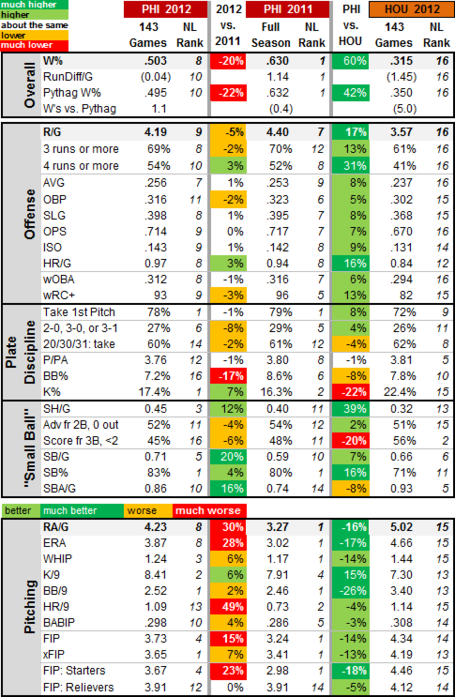 Below is a comparison of the stats as they stand today, with how they looked at the All Star Break: 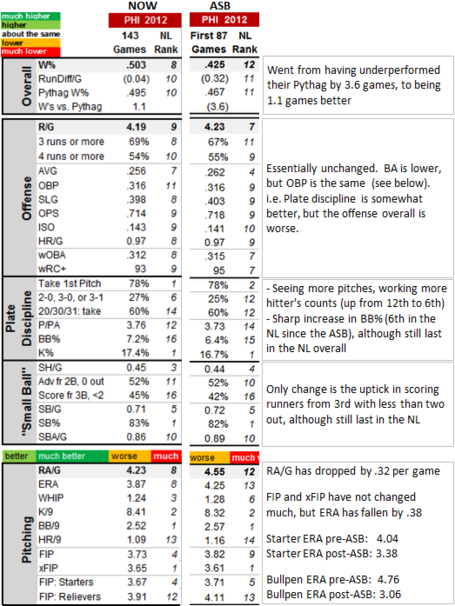 Yep, the Astros look pretty bad. They are 5-6 in September though, including a 2 of 3 series win vs. the Reds last weekend. 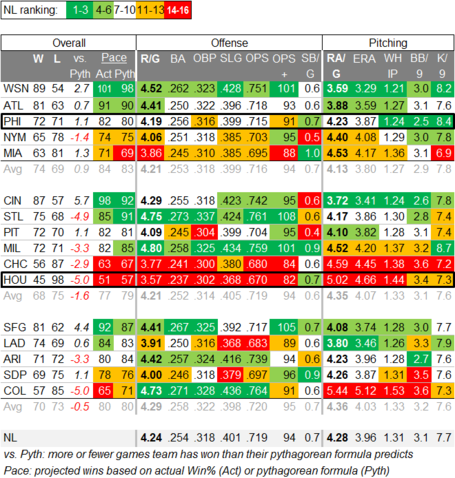 Ryan Howard
Thanks in part to not playing full-time until he was 25 years old and already a fully formed slugger, Howard reached his 100th, 200th, and 250th home runs in fewer games than any player in history. However duplicating that feat with the 300 HR milestone is proving much harder. He came into the season needing 14 home runs in 59 games, and got off to a good start, hitting 7 in the first 29. Since then he's been scuffling, hitting .224/.303/.364, with only 3 homers in those last 28 games. So he's now at 296 home runs in 1,084 games, and is faced with having to hit 4 in the next two in order to surpass Ralph Kiner one more time. At this rate it will be close as to whether he can get to 300 in fewer games than Juan Gonzalez (albeit purportedly through the wonders of science, Juan Gone had 340 dingers before his 30th birthday).

Below are the fastest in terms of fewest at bats -- Howard had set the record for the first 100 and first 200 home runs, before falling off the pace. He now has 4,001 career at bats.

Cole Hamels
- Hamels' next start (28th), scheduled for tomorrow, will tie him with Jim Bunning for 8th most starts in Phillies history, with 208.

Cliff Lee
- Needs 3 strikeouts to reach 1,500 for his career, which will make him the 26th active pitcher to do so.

Jonathan Papelbon
- His 34th save of the season yesterday moved him ahead of Dave Righetti for 31st All-time, with 253.