Does the Ball Really Fly Out of Citizens Bank Park in Hot Weather?

Share All sharing options for: Does the Ball Really Fly Out of Citizens Bank Park in Hot Weather?

For the longer version, read on:

Whenever multiple home runs are hit at Citizens Bank Park on a warm summer's night, discussion inevitably gets around to how well the ball carries at CBP in hot and humid weather. However the stats don't seem to support that. Below are home runs hit (by both teams) at CBP in each month in 2008-2012: 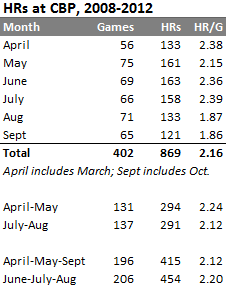 There is no indication that hot weather has boosted home runs, and in fact if we compare the two cooler months (April-May) with the two hottest (July-Aug), there have actually been more homers in the cooler months.

Adding in June and September tips the scales to the warmer months, but the effect is relatively modest:

Compared to Away Games

But maybe when people talk about CBP being homer-friendly in warm weather, they mean relative to other parks. So how do the above HR rates compare to the Phillies' away games?

Home runs per game by both teams: 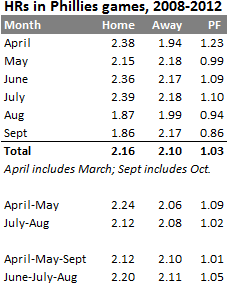 If anything, relative to other parks CBP is slightly more homerun-friendly in April and May, when the Park Factor of 1.09 shows there have been 9% more home runs per game at CBP in those months than in the Phillies' road games.

Again, adding June and September tips the balance to the warmer months. But when considering the HR park effects by parks such as Cellular Field, Coors, and Great American (all 30-40% increases over several years), this is relatively minor:

If we go all the way back to when CBP opened in 2004, the two coolest months are still higher than the two hottest:

When we include June and September, we see something like we might have expected, although the effect is still modest:

It may be that five, or even nine, years of data is not enough for the numbers to normalize for any given park. MLB stats for 2000-2012 show that, across baseball (and the nation), there is a bump in the summer months:

But again, when we say that CBP is more homerun friendly in hot and humid weather, we are saying what common sense tells us we would expect to see, more so than what has actually been happening.