And The Horse You Rode In On: Braves 2, Phillies 6

Share All sharing options for: And The Horse You Rode In On: Braves 2, Phillies 6

Let me be very clear about something: I do not like Larry Wayne Jones, Jr. at all. I don't care who knows it. If you try to tell me I'm wrong for doing so, I'm going to laugh in your face. I can, and do, have respect for the player: one of the greatest switch-hitters of all time and a fine third baseman throughout his career. But I do not have to like him as a person, and I don't. I imagine most of you don't either. I read the three consecutive blog posts detailing how and why most of us dislike the 40-year-old man who insists on calling himself "Chipper." But I'm not here to spell out my reasons for or the measure of my distaste for Jones. I already did that earlier today. This fine blog and Twitter made sure of that. Thanks, Wet Luzinski.

The Phillies, however, also do not like Larry Wayne Jones, Jr. either, and they certainly weren't afraid to let him know it, either. The Phillies trounced the Braves this evening by the score of 6-2, doing their damnedest to embarrass Mr. Jones on the night of his peer-pressured, fingers-crossed, botoxed-smile retirement ceremony. And they did just that. Details after the jump.

Kyle Kendrick continued his freakish run of dominance, throwing 6 2/3 innings of two run ball, allowing 5 hits and one walk while striking out 6. His change-up continues to be a nasty out-pitch for him, and he had hitters flailing at it all evening. Kendrick left the game with a runner on in the seventh, giving way to Jeremy Horst, who would get Reed Johnson to fly out to end the inning. Bastardo would work a scoreless eighth, striking out two.

The offense, meanwhile, smacked Tommy Hanson around just a little bit, tacking 5 runs on the troubled starter in 5 1/3 innings. This marks the sixth straight start by Tommy Hanson where he has failed to go at least six innings pitched (per Jayson Stark). You kinda feel bad for the guy. He was a rookie-of-the-year caliber player upon his debut, and a staple of the Braves rotation for a season and a half, then injuries to his shoulder and back seemed to kill the success he was having. And he certainly didn't have much success tonight, especially in the bandbox* of Citizens' Bank Park. 3 of the 5 runs he allowed came on solo home runs, one by Kevin Fransden in the third inning, and back-to-back jobs by Ryan Howard and Carlos Ruiz in the fourth. Chase Utley, at j reed's request, would add a fourth home run off Luis Avilan in the eighth, which would set the season high for home runs hit in a game by the Phillies.

I suppose I would be a little remiss if I didn't talk a little bit about what the Phillies did to honor Larry this evening. In a pre-game ceremony, Chase Utley and Jimmy Rollins presented Jones with a wonderfully done oil painting by the Phillies' resident artist, Dick Perez. The crowd applauded politely...

...And then the game started, and the Phillies' benevolence evaporated quicker than you can say "yicketty." Jones went 0-4 at the plate on a flyout to left, a groundout to second, and two inning-ending strikeouts, one courtesy of Kendrick in the first with Michael Bourn on second, and another in the eighth against Bastardo with Martin Prado on first. And he was booed and booed and booed some more. It was a fun game, folks.

Also, the Cardinals lost to the Chicago Cubs in extra innings. The Phillies are three back of the second wild card. Ya gotta believe! 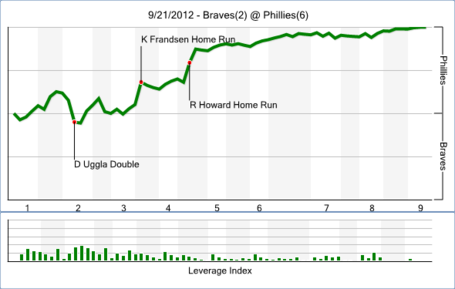