Darin Ruf hit his first major league home run as the Philadelphia Phillies took the first game of a three-game set with the Washington Nationals.

Ok, fanboy moment over. You'll forgive me for indulging in that though, I'd imagine. Sure, I understand that a 26-year-old drafted out of college and fresh out of AA ball who has no clearly-defined role in the field might not exactly turn heads. But come on, the guy was the Eastern League MVP and the Phillies' Paul Owens Award recipient for 2012 (I should know, I wrote the article). He's the home run king of the Reading Phillies, his 38 bombs beating the record of 37 set in 2004 by our very own once-premier slugger Ryan Howard. The guy's nickname is "Babe," for God's sake! How can you not expect him to be awesome!?

Oh right, the whole "26-year-old drafted out of college and fresh out of AA ball who has no clearly-defined role in the field" thing...

Ok, I'll admit that I don't expect any earth-shaking out of Darin Ruf in the future, but still, it's nice to wonder what could be. While his actual major league production remains to be seen, a guy who hits nearly 40 home runs in a single season at any level should give you pause. And it's not just the home runs; the kid hit .317/.408/.620 in his first season at AA. That's pretty damn good, even for a guy his age. It certainly makes me a little starry-eyed about what he could do in a major league lineup. We saw perhaps a glimpse of that last night, as Ruf got his first career start in the major leagues. His night ended early as he was pulled in the seventh inning as part of a defensive shift, but during his six innings of play, he certainly did a fine job.

Ruf kicked things off for the Phillies in the second inning, taking Nationals southpaw Ross Detwiler deep into the seats in left field for his first major league homer, which would tie the game at one run apiece. The pitch to Ruf was actually in a little bit on the hands, but Ruf managed to pull his hands in and muscle it out of the park. Kid's strong, alright.

The Phillies would continue their offensive push in the third, tagging Detwiler for four runs on back-to-back walks to John Mayberry and Chase Utley, an RBI single by Ryan Howard (off a lefty, I know!) and a three-run blast by Carlos Ruiz. The Phillies led 5-1 at the end of the inning. Domonic Brown would add a long home run on the first pitch he saw from Craig Stammen in the sixth.

Unfortunately, the Gnats weren't going down without a fight, tacking on two runs in the fifth inning against Cole Hamels on RBI singles by Bryce Harper and Ryan Zimmerman. No doubt you could say Hamels was pretty unlucky in that inning; both of the run-scoring singles were true-blue BABIP jobs, just barely finding their way under the gloves of the infielders. That said, Hamels clearly was not at his best last night. He needed 99 pitches to get through just five innings of work. He did strike out 6 while only walking one, but he was giving up quite a few foul balls and he ran four 3-ball counts to hitters, not including the walk. Even so, Hamels left the game after enough innings and the lead, and he earned his 16th win of the season, a new career high in wins for the 28-year-old lefty.

The Phillies bullpen did a fantastic job keeping the Nationals at bay for the remainder of the game, with four relievers combining for three scoreless innings following Hamels's departure. Jonathan Papelbon worked a scoreless ninth, striking out two for his 37th save of the season, which ties him with Todd Worrell for 30th all time in career saves with 256. Say what you want about him, the man can close out a ball game with the best of 'em.

The indomitable Kyle Kendrick (what?) gets the start this evening against John "Igor" Lannan, another lefty. Given his performance yesterday, I'd be shocked if Darin Ruf does not make it into the line-up. And considering that Gio Gonzalez pitches tomorrow, we could very well see Darin Ruf start all three games of this series. That would be cool, wouldn't it guys? Huh, wouldn't it? Wouldn't it!? 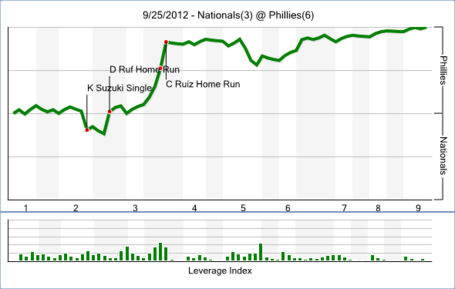