Rollins is already 2nd on the Phillies all-time list in several categories, and will likely add two more by the time the season ends next week.

Before we update the milestones, this will probably be the last time we'll be looking at the NL Wildcard standings. We really only care about the Phillies (win out) and Cardinals (lose out), but this is what needs to happen to force a 5-way time for the 2nd wild card spot: 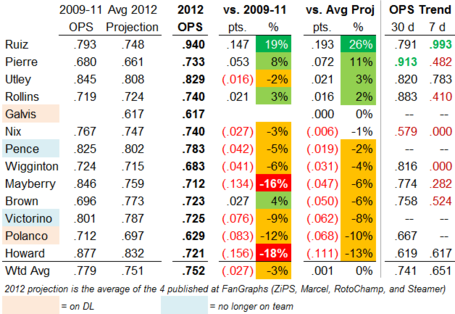 So a week from now he could be 2nd on the Phillies' all-time list in all of these categories:

Ryan Howard
- Howard's next extra base hit will tie Pat Burrell for 9th most in Phillies history, at 518.

- I think it was phillyinportland who had pointed out that challenging these "fastest to the milestone" home run records is only going to get more difficult for Howard going forward. He hit his first 200 at a blistering pace, but has slowed considerably in hitting #201 through 300. In fact, #251-300 have come even more slowly, at a rate of one every 4.76 games, but that can at least partly be attributed to his achilles injury:

Jonathan Papelbon
- Tuesday's save was his 37th this year, and tied him with Todd Worrell for 30th All-time at 256.

Also, in a former Phillie note, Shane Victorino stole his 200th base on Tuesday, becoming the 25th active player to reach that level.