Roy Halladay overcomes a rough first inning and the Phillies lineup bangs out 15 hits to get back to .500.

Going by the stat line, Roy Halladay's 11th victory in 2012 and 199th career win has to rank toward the bottom in terms of eye-popping numbers or style points. The future Hall of Famer went just five innings, retiring the side in order only once, and allowed four runs to see his season ERA balloon to 4.49, his worst since the 10.64 mark in 2000 that got him banished to the minors, from where he rebuilt himself into Doc Halladay, Breaker of Faces.

Yet considering the rough treatment Halladay received in his previous start last weekend against the hated Braves, and how terrible he looked in the first inning tonight, he earned some swagger with this one. After a week in which virtually the whole of Phillies fandom wanted to see Doc take a seat for the remainder of this mostly miserable season, he came out and surrendered a single to leadoff hitter Bryan Petersen, a single to Donovan Solano, a walk to Jose Reyes and a two-run single to Giancarlo Stanton. The Marlins added a third run in the inning to take a 3-0 lead, as Halladay struggled with his location and couldn't crack 90 with his fastball.

But Miami starter Ricky Nolasco was little better, struggling through a 39 pitch second inning in which the Phils got two runs back on a Pete Orr double. Halladay would allow just one more run on the evening: the obligatory second-deck homer to Stanton, who's now hit five against the Phillies this season, to lead off the third inning. And he left with a lead after his teammates put up three in the fifth on a two-run Chase Utley single and a Domonic Brown triple. Halladay's final action of 2012 was a strikeout of Greg Dobbs with two men on base to preserve the 5-4 advantage.

The Phils added two more in the seventh on a Carlos Ruiz double, plus single runs in the eighth and ninth as a lineup replete with guys who spent most of the season in the minors (Brown, Darin Ruf, Orr) accounted for 15 hits. And their once-beleaguered bullpen continued its resurgence as well, holding the Marlins to one run in four combined innings of work--though it wasn't always pretty, and it damn sure wasn't quick. Jeremy Horst and Justin De Fratus combined for two clean innings in relief of Halladay, but Phillippe Aumont and Antonio Bastardo pitched into and out of trouble in the eighth, allowing one run on two walks, a hit, and three wild pitches--the last of which came on a bases-loaded strikeout and concluded with Carlos Lee getting thrown out at home to end the inning. Jonathan Papelbon came on to finish up, though not before loading the bases and ensuring that this late-season game between two non-contenders passed beyond the four-hour mark.

A tip of the cap to Roy Halladay, who ends one of the more challenging seasons of his great career in the win column--and is probably finishing up his post game workout as I type this. Sweet dreams, Doc: we await your rising in 2013. 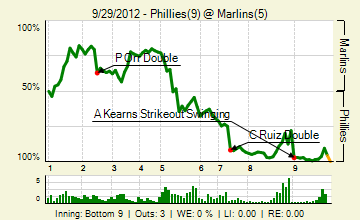