Cole Hamels puts a bow on his superb season with a dominant performance in south Florida, supported by a three-hit effort from Carlos Ruiz.

Cole Hamels has been either "the" ace or "an" ace of the Phillies almost since he made his major league debut in 2006. But for a variety of reasons, he's never made an Opening Day start. From 2007 through 2009, Brett Myers did the honors (in 2009, a minor injury pushed Hamels back); in each of the last three years, it's been Roy Halladay. In 2011, coming off a season in which he posted a 3.06 ERA and struck out over 200 hitters, Hamels didn't start until the season's fourth game.

Without any disrespect to Halladay's greatness or the beast that is Cliff Lee, llow me to go on record that when the Phillies open the 2013 season in Atlanta next April, Cole Hamels should be on the mound. The clear standout of the 2012 Phils rotation, Hamels completed perhaps his best all-around season on Sunday afternoon in Miami, leaning on a live fastball and his signature devastating change to stifle the Marlins over seven innings en route to his career-high 17th victory. Hamels limited the Fish to five hits and a walk, striking out eight to set a new career best with 216 for the season. He ends 2012 with a 3.05 ERA. His only truly rocky inning was the fourth, when the Marlins collected three of their five hits and scored their lone run on a Carlos Lee single; two Miami players were out at home in the inning, including Giancarlo Stanton on Lee's single. In both the fifth and sixth, the Marlins got a man to third with one out, but couldn't cash the run either time.

The other bright star in the murky sky of the 2012 season has been Hamels' battery-mate, Carlos Ruiz. Chooch turned in another standout game on Sunday, sparking the offense with three hits including his 31st double of the season. That capped a three-run first inning off Marlins starter Nathan Eovaldi that gave Hamels all the offense he needed. Nate Schierholz added two hits for the Phils, who notched their 80th victory of the season.

It all comes to an end in Washington this week, as Kyle Kendrick takes the mound Monday to begin the final series against the Nationals. 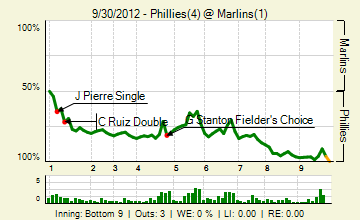