The Philadelphia Phillies won the rubber match against the Cincinnati Reds this afternoon by the score of 6-2. With the win, the Phillies take the season series from the Reds, the team with the second best record in baseball, with 4 wins and 3 losses.

Roy Halladay continued his trek towards regaining the dominance that has made him one of the best pitchers in the game, tossing 7 1/3 innings of one-run ball. He was vintage Roy Halladay today: he struck out 5, walked only one, and induced a veritable $%&@-ton of groundballs. The only run he allowed was on an RBI double by Jay Bruce, who also homered in the ninth off Jonathan Papelbon. Bruce's 6 RBI in the series were the only runs the Reds would score against the Phillies.

The offense got to Reds starter Mike Leake early, tacking on 4 runs in the second inning on an RBI single by Domonic Brown and a three-run home run by Erik Kratz. Chase Utley would add a two-run shot in the next inning, and Leake would be yanked after allowing a double to John Mayberry in the same inning. The Reds bullpen, one of the best in baseball, would keep the Phillies scoreless for the remainder of the game, but the damage was done.

Antonio Bastardo would relieve Roy Halladay in the 8th and pitch 2/3 inning of scoreless ball. Papelbon would allow a line-drive bandbox'd home run to Jay Bruce and a single to Todd Frazier, but two strikeouts and a groundout from the next three hitters secured the game and the series victory for the Phillies.

Fangraph of nostalgia after the jump: 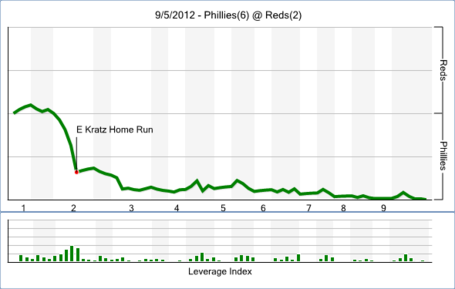