Items after the jump:
- Mayberry surging
- Phillies' paths to the postseason
- Phils batters vs. projections
- Phillies stats vs. 2011, and vs. the Rockies
- NL Standings and team stats
- Milestones: Rollins joining exclusive company; also Howard, Utley, Halladay, and Hamels (and Martinez)

Till the bitter end.

Many teams, but mostly St. Louis, would both have to struggle down the stretch.

For each of these teams, there is a magic number of Phillies wins and the other team's losses that would clinch the Phillies finishing ahead of them: 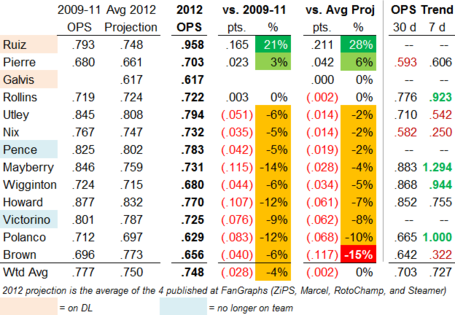 Phillies Team Stats vs. 2011 and vs. the Rockies 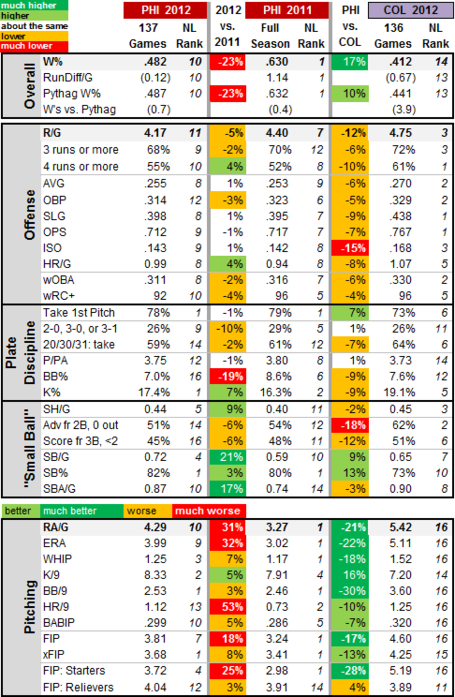 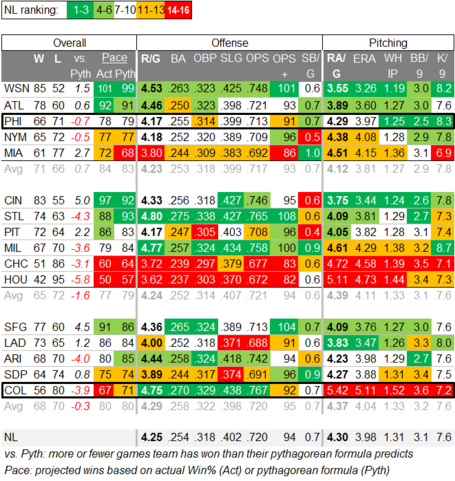 Chase Utley
- Utley's home run on Wednesday was the 503rd extra base hit of his career, tying Cy Williams for 11th on the Phillies all-time list. Howard passed Williams earlier this month and stands at 510, and Pat Burrell is next at 518.
- That home run was the 198th of his career, and he needs 2 more to become the 9th Phillie to reach 200.
- 2 more doubles (13 total) will tie Granny Hamner for 10th in Phillies history at 271. The next one (14th)will then tie Sam Thompson for 9th.
- His next Sacrifice Fly (3rd this year) will join Bob Boone, Von Hayes, and Mike Lieberthal for 6th on the Phillies list at 43 (Rollins just moved ahead of that group and is in 5th with 44).
- 3 more HBPs will make him the 22nd player in history to reach 150.

Cole Hamels
- Hamels' next start (27th this year) will tie Jim Bunning for 8th most in Phillies history, with 208.

Michael Martinez
Martinez' batting average and OPS+ are at historically low levels, and they continued dropping during the Reds series. We could just compare OPS, but since the level of offense changes from one era to the next, we use OPS+ instead since it controls for that.

MLB -- Half Million Error March
According to the Baseball-Reference.com home page, MLB is on the verge of recording the 500,000th error in history (since 1876). There have been 499,845, and the half-millionth will likely be made over the next two weeks.