From a Phillies fan perspective, it would be tough to pen a more depressing baseball script than what the Mets and Phils enacted at CBP Monday night. For the already-reeling home team, there was Roy Halladay, erstwhile Ace of Aces. In the second inning, after allowing a double to Marlon Byrd, Halladay hit Lucas Duda with a pitch, and gave up a three run homer to John Buck. Before that inning, Duda hadn't reached in nine lifetime at-bats against Doc; Buck was 4 for 22, all singles. No longer.

On the other side, there was Matt Harvey, age 24, blowing high-90s heat past the slow bats of the aging Phillies hitters when he wasn't getting them to chase evil breaking stuff out of the strike zone. The prospect of him sticking in in the Phils' collective ear for the next decade is less than delightful, even before considering that the Mets have two more guys in the high minors allegedly about as good (and our old pal Travis D'Arnaud to catch them). The game was over by the fifth, when the Mets stretched a 4-1 lead to 7-1 and the inevitable Chad Durbin switched the dial from pathos to farce, letting two more inherited runners score. Harvey cruised through seven innings, striking out nine.

I'm morbidly eager to see how "Baghdad Rich" Dubee spins this one. After a 1-2-3 first inning, Halladay struggled terribly until Charlie Manuel mercifully pulled him with a run in, two men on and nobody out in the fifth. His velocity was slightly up, at least per the ESPN gun, and his pitches had some movement--but his command was nonexistent, as shown by the HBP on Duda and the three walks he issued. A lot of pitches weren't close. Ten of the 22 batters he faced reached base, and he required 99 pitches to record those 12 outs. It seems possible that Halladay can harness what he has now and re-emerge as a moderately effective mid-rotation guy... but it seems far more likely that he's hurt or otherwise just broken.

Offensively, the Phillies never put much pressure on the young Harvey, who stranded Ben Revere on third with one out in the first and minimized the damage from a first-and-third, no-out jam in the fourth. For the night, they managed just four hits and two walks against Harvey and reliever Josh Edgin. Perhaps like the rest of us, they were just so bummed out by Halladay's suddenly evident mortality that they figured why bother. 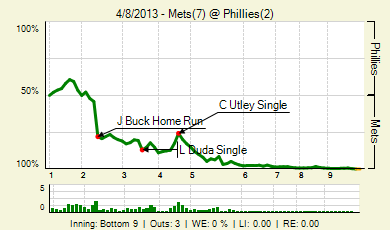