Cliff Lee pitched 8 2/3 strong innings, the Phils nearly doubled their season home run total in the span of four third-inning batters, and for at least one night, all was well in south Philly.

Share All sharing options for: The Upside: Phillies 8, Mets 3

Through the first two games of their series against the Mets, the Phillies have shown us their worst- and best-case scenarios for 2013. Last night was all downside, with high-dollar, big-name aging ace Roy Halladay battered by a middling New York lineup and the offense all but silent against young gun Matt Harvey. Tonight was the counter-argument, as high-dollar, big-name aging ace Cliff Lee suffocated the Mets through 8 2/3 innings while the Phils' offense erupted against Dillon Gee.

The Phillies jumped on Gee for four runs in the second. A John Mayberry double scored Michael Young and Domonic Brown, then Lee singled in Mayberry and scored on a Jimmy Rollins double. Gee barely had a chance to catch his breath as Lee set down the Mets on seven pitches in the third. Back on the mound, he quickly surrendered an opposite-field solo home run to Ryan Howard, then another to Young on his next pitch. After Brown flied out, Mayberry took a pitch for a ball, then smashed the third solo shot in five pitches just fair down the left-field line to put the Phils up 7-0.

The Mets got two runs back in the fourth, as David Wright reached on a Rollins error and the inexplicably scalding John Buck hit his fourth home run of the season and second in as many nights. After Young tripled in Chase Utley in the bottom of the inning, New York scored again in the fifth as Jordanny Valdespin tripled and came home on an Erik Kratz passed ball.

Then Lee stopped them cold, setting down eleven in a row before Marlon Byrd's one-out single in the ninth. He struck out pinch-hitter Anthony Recker, but was pulled an out shy of the complete game after Justin Turner's single. Mike Adams came on to finish things up by striking out Ruben Tejada on three pitches. Lee finished with six strikeouts, and extended his major league record of starts of at least six innings and no more than one walk allowed to 19 straight, dating back to last season. 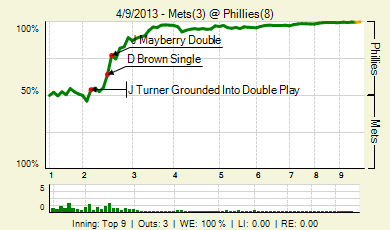