A taste of the first 100 years: Nationals 11, Philadelphia 2

Philadelphia falls to Johnson's Washington team. A headline straight out of the roaring twenties.

Share All sharing options for: A taste of the first 100 years: Nationals 11, Philadelphia 2

This being my first game recap as a contributor, I thought I should do something that might stand out or be at least somewhat memorable. That way I can rest assured that no matter how bland and uninspired my future recaps are I'll always be able to look back to the decent one I did with some pride, much like Bob Woodward will always be known for his Watergate reporting despite the sterility of his reportage over the subsequent forty years. That is, of course, easier said than done, so I took to thinking about how I might create such a post. Enter the bloglord email listserv type thing.

Near the end of this past week the bloglord email list somehow drifted to the topic of musical preferences, first with a rigorous debate over the quality of Steely Dan then meandering into a discussion of personal music choices, concerts attended, first albums we ever purchased, and Joecatz's run-in with half-naked people and a monkey backstage at an Aerosmith concert. My contributions to that discussion thread were relatively meager, as I don't have particularly strong opinions on music. I like all sorts of stuff across most genres, including pop music, and tend to do little more than ignore music I don't find audibly pleasing. A musical snob I am not; listen and let listen, I say. To illustrate my wide-ranging tastes I mentioned that I had come across a Doo Wop-inspired cover of Miley Cyrus' recent pop hit "We Can't Stop," found it interesting, and how I liked that combination of genres.

And so, inspired by that anachronistic mash-up I've tried inserting the current players into a recap medley of yore. (That means portions of what follows have been lifted from long dead newspaper writers, if that's not clear, though much is original)

Washington, D.C., September 15. The Phillies went down to defeat in the final game of the Washington series, 11-2. The Nationals emerge victorious in the season series, winning 11 games to the Phillies 8, leaving the wild card bee still buzzing in the bonnets of the Washingtonians, as they hope something will happen to Dusty Baker's team that will pull it down while they are going up.

Each team was quickly dispatched in the first.

The Philadelphia's plated their first run on a sacrifice fly by Frandsen. This came after loading the bases in the second frame on a two-base hit by Brown, a hit batsman by the Nationals hurler Zimmerman, and a weakly hit ball by C. Asche. Desmond fielded it but Asche was safe.

Johnson's team responded in the bottom of the inning with a run of their own on a double by "Mondo" Harper and a Ramos single.

The see-saw match continued in the third as the visitors pushed home a second run on Bernadina's two-base drive and ground outs by Rollins and Utley in that order.

Fourth-inning fireworks were ignited by consecutive doubles from Harper and Desmond, tying game for the Washington club. Cloyd, the Phillies twirler, then surrendered three consecutive singles. A Span liner to 2B Utley put out the final National of the inning but not before three Nationals had crossed the home plate.

The home team continued their assault on Cloyd in the fifth, who left a broken reed after ceding two singles sandwiching a wild pitch. JC Ramirez replaced him in the box.

Sandberg's squad would not recover from that battery, though they peppered away fitfully at Zimmerman's offerings they would never come within threatening distance of the Nationals. In the sixth Ruf rapped a rocket to the left field wall only to be extinguished running into second, Harper getting an assist and Lombardozzi the putout.

Over the remaining innings the Washington team would rain down a shower of hits upon the visitors' relievers Ramirez, Savery, and Robles. Ramirez allowed a smash over the left-field wall to Ramos in the 6th, Savery put out only one batsman out of the five he faced in the seventh inning. Robles took over on the firing line and was knocked for three more hits, raising the home club's run tally to eleven.

The Washington's principally relied on Zimmerman to mute the Phillies' bats. He was effective with men on bases and kept the light hits by Sandberg's squad well scattered.

The mathematical representation of the chronologically changing probability of winning this match is graphed below. (Depress your pointing device on the image to magnify) 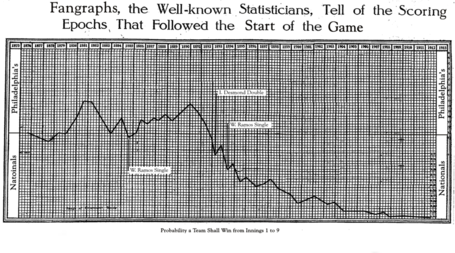