Only a portion of the ballots for the 2013 Hall of Fame voting have been made public, but those point up stark differences between published and secret ballots, and also among the published ballots between those who voted for alleged PED users, and those who didn't.

Share All sharing options for: Hall of Fame Voting: Published vs. Secret Ballots

Much of this was in the comments to David S. Cohen's excellent Sactimonious Blowhards, but I've pulled it into a separate post due to popular demand (two comments -- it doesn't take much). This also uses the latest list, with eight more published ballots.

(By the way, it looks like Lewie Pollis at Beyond the Box Score posted a similar but more in-depth analysis of the published ballots about an hour and a half before I commented on them, but based it on 102 ballots, which must have been an interim list.)

Alright then. Of the 569 voters for the Hall of Fame, 124 (or about 1 out of 5) chose to have their ballots published on the the BBWAA site. That left 445 not detailed there (including the 5 blank ballots), although many of these must have been published in the voters' local media outlets, since they were aggregated by Baseball Think Factory for the horse race reporting leading up to Wednesday's announcement of the results.

In comparing the ballots made public on the site, with those not made public, the two groups differed in some interesting ways: 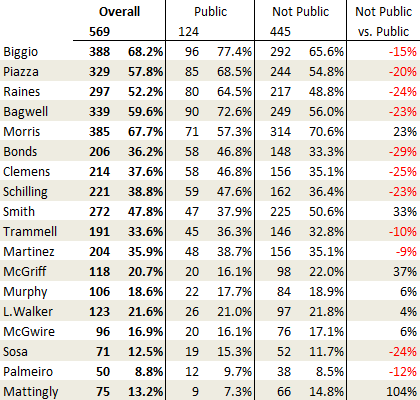 First, note that on the published ballots, Craig Biggio got comfortably more than the 75% minimum needed to get in, and Jeff Bagwell came rather close, with nearly 73%.

Secondly, those who chose not have their ballot posted were 23% more likely to vote for Jack Morris. Morris is a favorite of the traditional stats crowd ("winningest pitcher of the 1980s") as well as the rising-to-the-occasion crowd (game 7 of the 1991 World Series), which may in fact have a lot of overlap with the first crowd.

These "secret" ballots also were much more likely to include votes for Lee Smith (33% more) and Fred McGriff (37% more). In addition, they were much LESS likely to vote for most of the other candidates, and especially Barry Bonds (29% less), and Roger Clemens (25% less).

Also receiving fewer votes on the secret ballots were Mike Piazza (20% less), and Jeff Bagwell (24% less), which might be related to the rumors and innuendo about their PED use.

However two others who got significantly less support in the hidden ballots were Tim Raines and Curt Schilling, both of whom are less highly thought of by the "traditional" voters. Raines because of the lack of big round offensive numbers despite playing an offense-first position, and Schilling for his relatively low number of wins.

As noted above, comparison of the published and secret ballots shows a possible link between punishing suspected PED users, and favoring players whose candidacy is based on traditional stats.

That link becomes clearer when analyzing the published votes. Bonds and Clemens are very closely linked on those ballots -- the 58 (out of 124) who voted for Bonds were exactly the same 58 who voted for Clemens.

In addition, if we take voting for Jack Morris to indicate favoring traditional stats (while not voting for him indicates a SABR orientation), there are some interesting trends:

The 66 who did NOT vote for Bonds or Clemens (which is clearly punishment for PED use), were 35% more likely to vote for Morris.

Another way of looking it:

Below is the full table, comparing those who voted for Bonds/Clemens on the published ballots, with those who didn't: 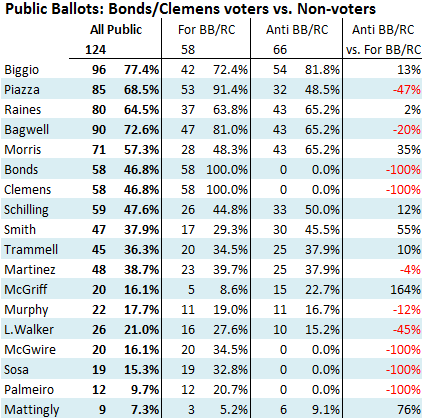