While most on this team are past their prime, they are only two years removed from a 102-win season. How well would the Phillies have to play in 2013 to compete for a division title?

Share All sharing options for: 2013 Phillies: What would it take to win 95 games?

To review what we have so far regarding Phillies projections for 2013:

- Here we worked out that the projections in the Bill James model would mean ~89 wins, based on certain assumptions about playing time
- Here we said that the ZiPS model projections would translate to ~81 wins
- Here we saw why the ZiPS projections indicate that the 95-win pace in the second half of 2012 is unlikely to be sustained in 2013 (partly because the 95 pace included about 6 wins attributable to luck, but mostly because the pitching will regress)

So given all of that, what would it take for the Phillies, as currently constructed, to have a strong year of, say, 95 wins, which would probably put them in contention for a division crown? In other words, what kind of performances would the current roster have to deliver in 2013 in order to generate a run differential large enough that it would translate to 95 wins with the pythagorean formula?

Let's work through one scenario where that would happen, and we can see how realistic that might be.

The traditional stats used for 2013 are shown in a table below, but here is how the 2013 wOBA compares for each player: 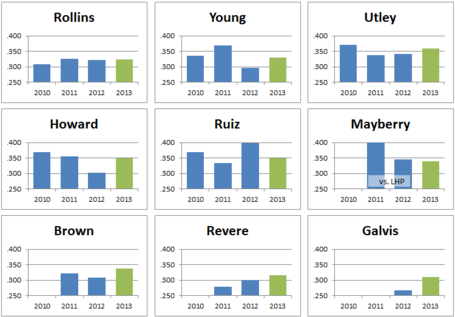 As in the previous reviews of projections, these are the assumptions for playing time: 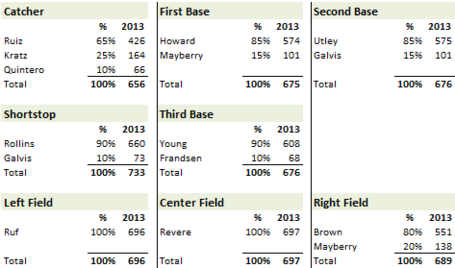 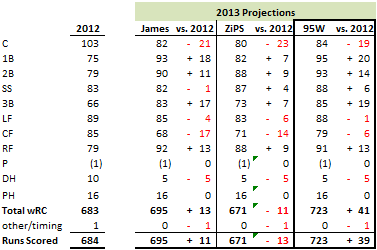 In total, this would translate to 723 runs scored, or 39 more than last year. 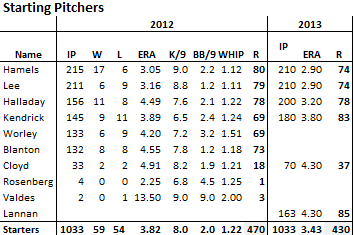 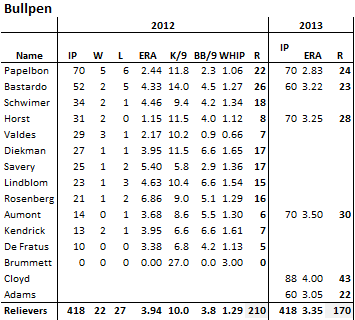 Looking further back, we could compare these ERA assumptions to recent years' ERA, but we wouldn't know how much luck/defense was involved in those past years. So instead, these graphs show FIP for 2010-2012, and ERA assumed for 2013: 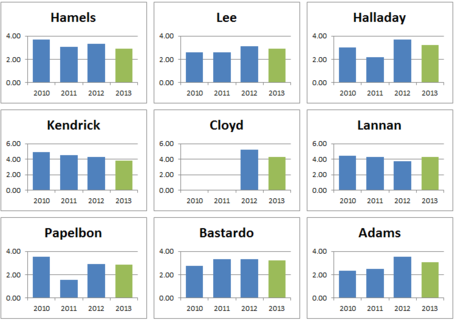 With 723 runs scored and 600 runs allowed, the pythagorean expectation would be 95 wins. For comparison, I've also included the 2011 totals below. This scenario would allow the 2013 pitchers to give up 71 more runs than the historic staff of 2011, but also requires the offense to score 10 more runs than that team:

In short, very little can go wrong, and a heck of a lot of things would have to go right.

Finally, a word about luck. There are several types of luck or random variation. This scenario includes quite a bit of two types: 1) avoiding injuries, and 2) playing (or at least getting results) at relatively high levels compared to recent years.

There is another type of luck that is assumed to be neutral in this scenario, and that is the sequence or timing of events, also known as "clutch". In other words, taking all the same individual stats, but sequencing the hits, home runs, walks, etc. (or hits/HRs/walks allowed, etc.) to occur in more favorable situations, and therefore result in more wins.

For example, the above stats could be ratcheted back so that they translate to only, say, 89 wins, but with some timing luck/timely hitting, they could very well end up resulting in 95 wins (or 80 wins, if it's "bad" luck).