The ZiPS projections from Dan Szymborski translate to somewhat better pitching, but also a worse offense for the Phillies than in 2012.

This is the second in a series analyzing the 2013 projections for the Phillies. The Bill James projections were reviewed here. The intent is to take each system's wOBA projections, make assumptions about playing time, and convert the projected wOBA to runs created (using the Tango/Fangraphs wRC formula), given those assumed PA totals. Similarly, ERA projections, along with assumptions about innings pitched and unearned runs, are converted to total runs allowed.

This edition looks at the Phillies stats from Dan Szymborki's ZiPS projections, as reported at FanGraphs.

The ZiPS projections for Phillies regulars in 2012 were the most pessimistic of those below, although of course the Phillies still fell short of them, on average:

While the ZiPS projections include forecasts for playing time, all the position players add up to about 13,000 plate appearances, or somewhat more than twice what a typical team has in a season. For purposes of converting the projections to runs, I've used these assumptions:

1) Each position will get the same number of PAs as in 2012
2) PAs to be distributed among 2013 players as below:
- 570+ PAs from both Utley and Howard
- Rollins and Young stay healthy and play almost the entire year
- unlike the Bill James projections, ZiPS includes one for Ruf and he's assumed to play every day in Left
- Revere plays every game in Center
- Brown gets the bulk of the playing time in Right 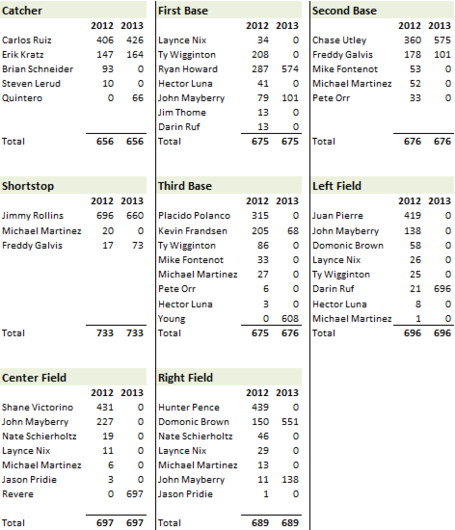 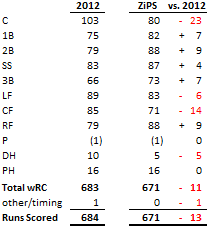 - Ruiz comes back to 2009/2011 levels
- Utley plays the majority of the time and duplicates 2012's wOBA
- Howard plays the majority of the time but has by far his worst year, aside from 2012
- Young improves modestly on the 2012 hodge podge of third basemen
- Revere is the worst hitter in the lineup and falls short of Victorino/Mayberry's 2012
- Brown improves to a .793 OPS
- Total runs created are 13 less than what the 2012 offense scored 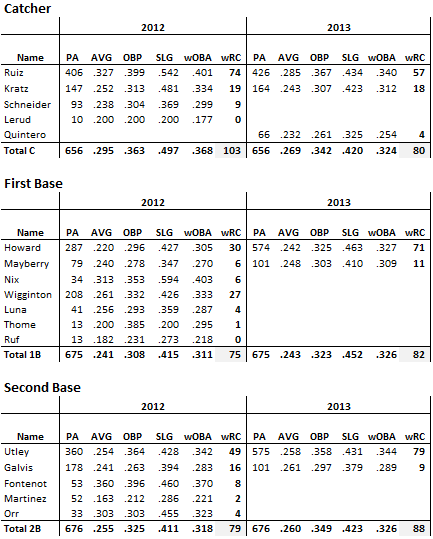 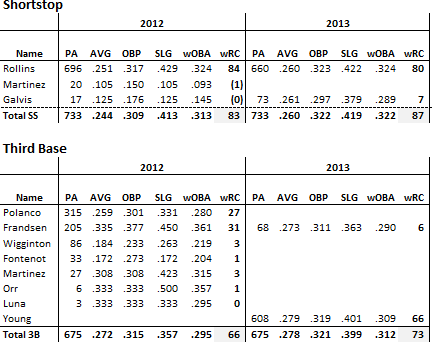 - Assumes Rollins stays healthy for most of the year 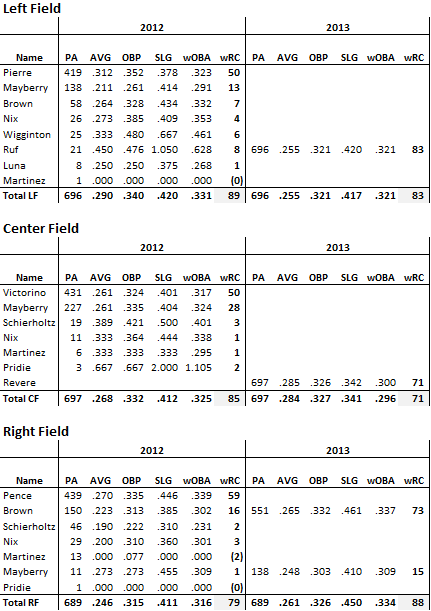 - Ruf is assumed to play full time.
- Assumes Revere plays every game, and falls well short of the Victorino/Mayberry 2012 production.
- Brown gets 80% of the PAs and duplicates Pence's 2012 rate stats

I'll take the over on Howard's HR, RBI, and OPS.

2012 Projections -- ZiPS was in the middle of the pack of last year's projections for the Phillies starting staff:

ZiPS projects that the starters will improve somewhat, with Halladay getting better (although not vintage Doc), while Hamels and Kendrick get worse.

Bullpen ERA stays essentially the same as in 2012. Bastardo is better, but Aumont and Horst are much worse: 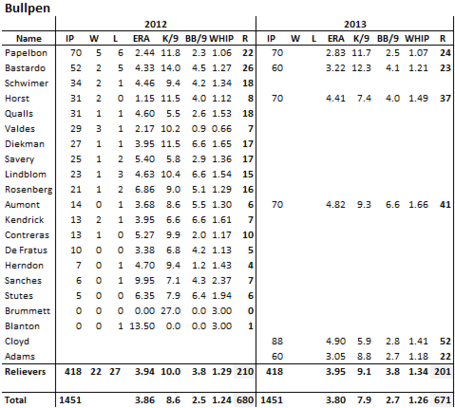 Total runs allowed by the staff improves slightly, from 680 to 671.

The ZiPS projections for both the Phillies offense and the pitching are much less optimistic than those by the Bill James model, working out to 24 fewer runs scored, and 48 more runs allowed: 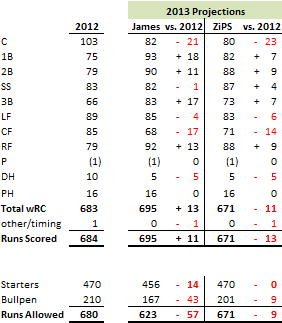 With projections for both runs scored and runs allowed, we can estimate a winning percentage for each set of projections. While the James projections translate to a Wild Card contender, the ZiPS numbers show the Phillies to be a .500 team again: