For a slow news day, I thought I would review some 2012 stats.

These are the team batting splits for last year, including where their OPS in each situation ranked in the NL, and how they compared with the 2011 stats.

Those in the top 5 or bottom 5 in the NL are highlighted. 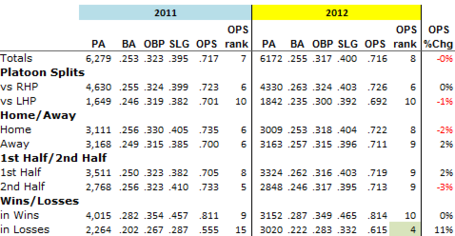 Unlike 2011, they hit about as well in the second half as they did in the first. The second half of 2011 included surges by Hunter Pence and John Mayberry, as well as a full half of Chase Utley. However in 2012 Chooch's torrid first half was offset by the presence of Utley in the second, as well as improved hitting from Kevin Frandsen and Jimmy Rollins.

Hitting in Losses is depressing in a couple of ways: first, there are obviously many more PAs in that category in 2012, and that means that more games with decent offense are included, which is why hitting in that split improved.

The Phillies swung at the first pitch less than any team in the NL in 2012 (again). When they did (and put it play), they ranked near the bottom, although they still did better in those situations (.822 OPS), than all others (.705), although that's skewed because the first pitch swing data does not include when they swing and miss or foul it off.

Obviously getting ahead 3-1 is beneficial, but it's somewhat surprising that the Phils were the best-hitting team in the NL once the count got to 3-1. 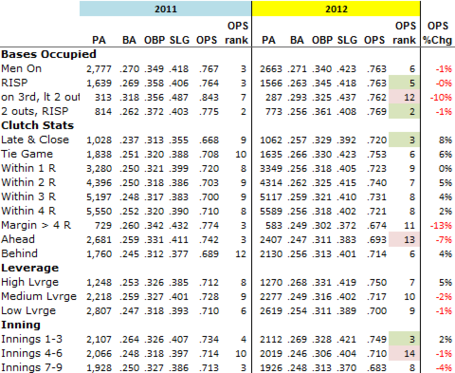 No surprise, the Phils were not very good with a man on 3rd and less than two out. But other than that, they were actually pretty good in "clutch" situations: 2nd best in the NL with runners in scoring position and two outs, 3rd best in "late and close" situations. 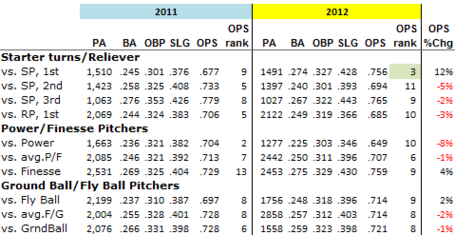 As expected from the "Innings 1-3" split above, the Phillies did relatively well their first time through the order against a starter.

Since they Phillies struck out the fewest times of any team in the NL (and 2nd fewest in 2011), the "Not in Play" splits includes relatively few outs, which drives up the OPS.

Worst in the NL in day games. 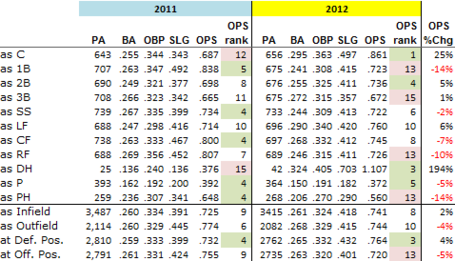 Also covered in more detail here, but some notes:

- Pitchers' hitting continues to be relatively good.
- Jim Thome did wonders for the DH stats.
- Pinch hitting was better than I remembered in 2011.
- "Defensive" positions includes the up-the-middle spots: C, 2B, SS, and CF 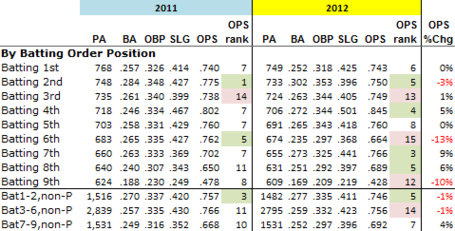 For more details, go to the baseball-reference page. Clicking on the categories in red text down the left-hand side of the page will give the breakdown by player.