Why did the Phillies improve so much in the second half of 2012, and can we expect that improvement to continue in 2013?

Share All sharing options for: What Do We Make of the Phillies' 95-Win Pace in the Second Half of 2012?

When the 2012 season ended, there was reason to be optimistic about the 2013 Phillies.

The first half had been terrible, and was capped by a month-plus-long stretch in which they were both bad AND unlucky:

9-25 in the last 34 games leading up to the all-star break, with the only consolation being that maybe they were only as bad as 13-21 (a 63 win pace over 162 games) based on their run differential.

However the second half started off much better, and improved further after the trade deadline. The Phillies were to head into the off-season having completed a second half in which they were 44-31, for a .587 winning percentage, or a 95-win pace.

When you looked a little deeper, it was evident that some of the luck that had eluded them in the first half came back in the second -- based on their post-ASB run differential, the pythagorean formula predicted an 89-win pace.

What was encouraging with that 89-win pace as a harbinger for 2013 was that they did it in a way that appeared to be sustainable:

- Catchers hitting over their head? Nah. Carlos Ruiz had come back to earth by then, and all Phillies catchers hit a combined .253/.328/.438 (.765 OPS) after the all-star break. Good, but not unachievable, even without pharmaceutical aids.

Victorino was gone, but there were other reasons for optimism:

- The second half included a .711 OPS from Phillies' first basemen, where Ryan Howard had posted an .835 OPS just the year before. So if Howard could regain even some of his pre-achilles tear performance, there should be improvement over the 2nd half of 2012.

When you compare the 2nd half performance (in wRC per 162 games) to, say, the ZiPS projections, the offense in aggregate looks similar: 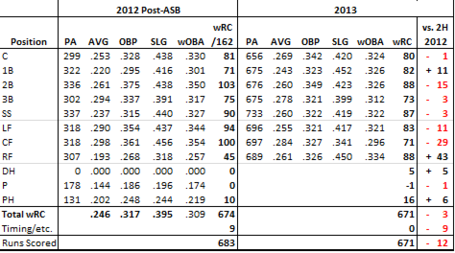 So yes, Ben Revere is not expected to come close to what Victorino/Mayberry did in the second half, but Right Field performance should be much better, and overall, 2013 is very close to post-ASB 2012 in terms of wOBA and therefore expected runs created.

As the first two tables above show, the reason for the improvement in the second half wasn't the hitting, as was widely expected with the return of Chase Utley and Ryan Howard -- runs scored essentially stayed the same after the break (4.23 to 4.21).

Instead, it was the pitching that improved dramatically, and at least according to ZiPS, it's the pitching performance that is really unsustainable as we look ahead to the 2013 season:

ZiPS expects Roy Halladay to improve, although a 3.42 ERA would rival some of his worst seasons, after adjusting for run environment.

However ZiPS expects Cole Hamels, Cliff Lee, and Kyle Kendrick to all be worse in 2013, and there's really not much to argue with there. Lee had an insane 13.6 K/BB ratio after the all-star break last year. Hamels might be able to get close to his 2.87 ERA, but is at least as likely to be in the low 3's. Kendrick's 2nd half was very encouraging, but KK will need to show he can stay aggressive and keep his K rate up before the 4.31 projection will start to look pessimistic. 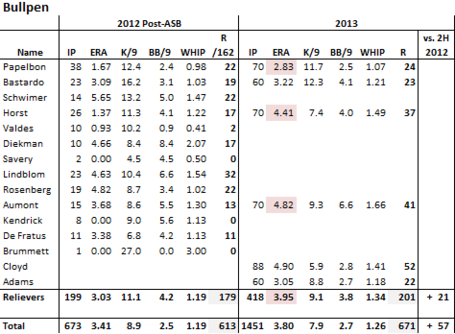 Jonathan Papelbon's 1.67 ERA is, not surprisingly, expected to regress in 2013. All other relievers had a 3.35 ERA in the second half, and that is expected to rise to 4.18, based on these 2013 innings assumptions. Jeremy Horst in particular, but also Phillippe Aumont, are expected to see their ERAs rise considerably.

In summary, the Phillies should be able to roughly match their hitting of 2012, including in the second half, when they played like a playoff contender. But the reason they improved in the second half was almost entirely due to their pitching, and that performance may not be repeatable in 2013.