Prospect Retrospective: Phillies Top Ten Lists of the Past 30 Years

We're coming up on the time of year when Top Ten prospect lists will be published for each farm system. Will the Phillies lists be topped by a player as impactful as Scott Rolen? or more like Brad Brink? Chase Utley? or Tim Mauser? Jimmy Rollins? or Ryan Brannan?

Share All sharing options for: Prospect Retrospective: Phillies Top Ten Lists of the Past 30 Years

There will be a stream of top prospects lists published over the coming months, and one of the most reputable sources for those is Baseball America.  Here we take a look back at the Top Ten Phillies prospects lists, as published by BA in the 31 years since 1983.

These are snapshots in time from before each season. Players may appear on multiple years' lists because they are recognized as a high ceiling prospect early on and then they make their way up the system, or they may have a good year to get onto the list and then plateau. Conversely, players may appear only once because they have a bad year and drop off the list, or because they get hurt, or they're so good that they quickly graduate to the major league club. Players also appear and disappear due to trades.

Most importantly, this is a Phillies-only view, and the strength and depth of the Phillies' farm system can determine whether the list is stacked with real prospects that have the potential to make an impact, or is filled out with longer shots or lower-ceiling players.

The annual lists are shown below in 8-year groupings, but first, two summary views:

Note, for example, the lack of highly regarded catching prospects for almost a decade before Marson, Valle, etc., and the dearth of left-handed pitchers for even longer in the '90s-'00s, or viable third base prospects after Scott Rolen was called up.

The 8-year breaks match the breaks in the lists below: 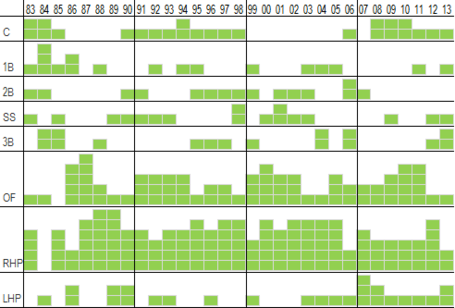 This shows graphically the level of rWAR that each prospect went on to compile in their major league career (or have compiled so far, for those still active). For example, the dark green box indicating 30+ WAR in the 1983 column is for Julio Franco, just before he was dealt to Cleveland as the centerpiece in the "5-for-1" trade to acquire Von Hayes. Scott Rolen reigns atop the 1995-'97 lists, and is then followed by a steady stream of 30+ players in 1998-2006: Rollins, Utley, and Hamels (Howard is in the 10-30 category with 19). In every Top Ten list from 1999 through '06, at least two of the top three were players would go on to compile at least 10 WAR in the majors.

The lack of players with significant WAR on the 2007-13 lists is largely explained by the fact that most are still active -- Bourn, Brown, d'Arnaud, Singleton, and others still have a chance at a productive career. But it's surprising how few impact players are in the lists from 1984, until Rolen arrives in the mid-90s.

Below is another view, adding up the career WAR to be compiled by all prospects listed that year. In each column, the blue at the bottom is the highest career total represented in that year's Top Ten, the red is the second highest, and so on. For example, the banner year in this view is 2003, which includes, as we go up the column, Utley (58), Hamels (35), Marlon Byrd (21), Howard (19), Gavin Floyd (15), and Ryan Madson (9), before petering out.

Mirroring the view above, there are momentary spikes caused by Julio Franco and Scott Rolen, but again there is very little to get excited about in the 1984-94 period.  And then after Rolen there is the relative Everest of WAR compiled by the prospects of the early-to-mid 2000s: 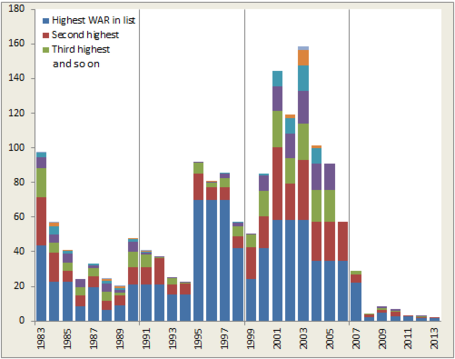 Below are BA's top 10 lists since 1983, with some notes on some less well-known top-ranked prospects.  The phrase that kept coming to mind as I put these together was TNSTAAPP.

Players who appear more than once are color-coded in order to more easily follow their progression. Click on a table for a clearer image. 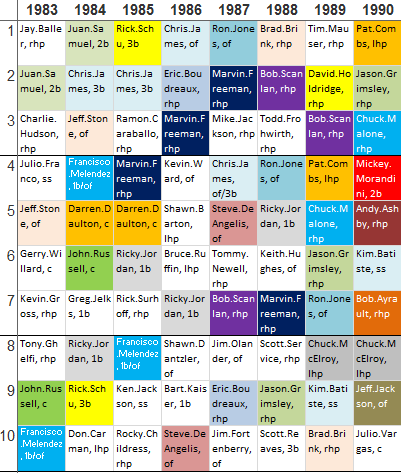 Tim Mauser: traded to San Diego for Roger Mason in 1993; pitched in 11 games for the Phls and 68 for the Padres.

Bob Scanlan: was traded to the Cubs for Mitch Williams in April 1991, and pitched in 290 total games over 9 seasons. 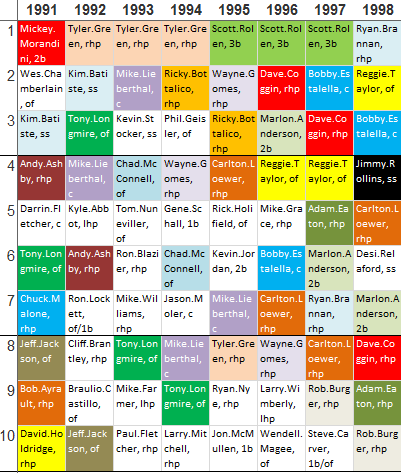 Ryan Brannan: rated as #58 prospect in MLB, made it as high as AAA for 16 games. 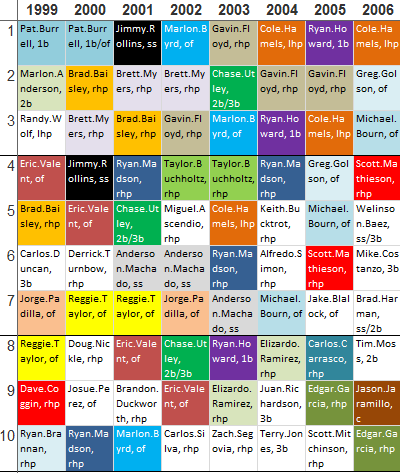 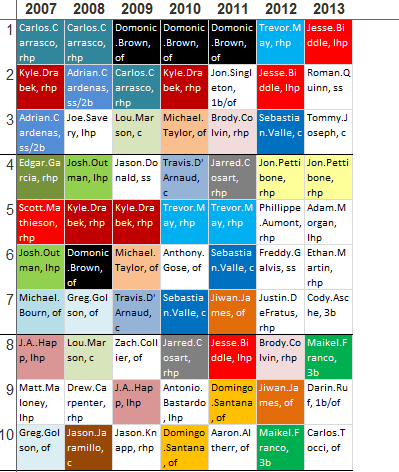 Adrian Cardenas: h/t Joecatz for forwarding this very interesting article posted by Cardenas yesterday in the New Yorker: Why I Quit Major League Baseball. Cardenas was selected by the Phils in the first round of the 2006 draft (37th overall), after being named by BA as the 2006 High School Player of the Year. He was traded to Oakland in the Joe Blanton deal, and released by the A's in March 2012.  Picked up by the Cubs, he appeared in 45 games with the major league club in 2012.