Strategy Assessment: Stuck in the Middle

Sign a free agent here, trade for a player there, and make a coaching change here. All of these transactions can change the outlook of a season, a team, etc... Yet, rarely do such moves move an organization from lost puppy to Iditarod racing husky. Making broad changes to philosophies and tenets that permeate throughout all aspects of a organization can bring about a better future. Is this something Phillies fans can expect, or are we stuck?

Share All sharing options for: Strategy Assessment: Stuck in the Middle

When the offseason began, the Phillies, like every other team in major league baseball, comprised a shopping list. The team needed to address specific areas like an outfielder, a catcher, a starting pitcher, and at least one upgrade in the bullpen. The team has already made moves on two of those fronts, signing outfielder Marlon Byrd and resigning beloved Panamanian catcher Carlos Ruiz. With Byrd and Ruiz entrenched in the starting lineup, the focus should now turn to the less glamorous yet equally important spots in the bullpen, possibly the rotation and maybe an upgrade off the bench.

His sentiments merely underscore the way most Phillies fans have come to regard Amaro's team building style. Some think he wishes to relive the glory days of 2007-2010, others assume he's doing his best to keep his job, while many, myself included, see this strategy deriving from stubbornness, arrogance, and egotism. For intelligent fans, it's difficult not to see the forest beyond the trees and understand that a team can and must prepare for the future even while pushing for present day wins. Organizations like the Rangers, Cardinals, Red Sox, Braves, Dodgers, and Rays all pursue both agendas.

Still, one aspect of Amaro's statement rings true, whether you like it or not, he mentions specifically "our team, the

Are the Phillies getting younger sooner by getting older now? A big market rebuild. 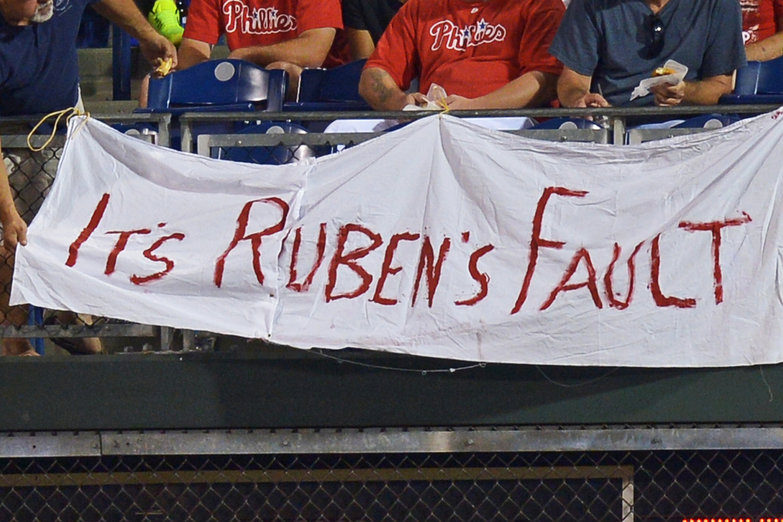 Joe discusses whether the Phillies current moves might actually make sense for the future of the team.

way it's set up..." He's right in that some moves that haven't panned out as well combined with some poor decisions from the start have left the Phillies with a win now or completely rebuild mode. While some may clammer for the team to strip down to the bare bones, Astros style, the Phillies have chosen, probably correctly, not to go in that direction. That doesn't mean that the team made the right choice, especially since other organizations have proven that a team can rebuild internally while continually putting up subpar, mediocre, or average seasons. The Phillies have already put together two consecutive seasons that have left fans nonplussed, and yet the front office continues to push towards a "win now" mentality.

Teams like the Rays, A's, Cardinals, and Rangers share many qualities, but one that stands out in a discussion of organizational strategy is where these teams place their unknowns. Teams generally have a core group of players who have value that cannot easily be found, and most likely make up a large portion of the annual payroll. The Evan Longorias, Yadier Molinas, and Adrian Beltres of the world are akin to the Phillies middle infielders Jimmy Rollins and Chase Utley or starters Cole Hamels and Cliff Lee. After going through the list of dynamic players, the difference makers, the next set of players are the dependable veterans. These players have fewer unknowns attached to them, and usually give a club what is expected of them, and rarely more.

Finally though, we have the group of young players. The team believes in these players, and may have high hopes for them, but ultimately, these players come with larger error bars, larger ± numbers. For example, the Rays put a lot of hope in Wil Myers' contributions in 2013. He may very well have come up from the minors and struggled, turning the Rays from a 92 win team into an 88 or 89 win team, which would have left them out of the playoffs. The same can be said for Cardinals youngsters Michael Wacha, Joe Kelly, and Matt Adams. All aided the team in making the postseason, and the Cardinals banked on these players doing well despite definite uncertainty.

It seems as though the best organizations, trusting in their scouting, drafting, and player development departments, place the burden of the marginal wins a team needs to go from winning club to playoff club. Instead of following this model, or something similar, the Phillies have put that burden on everyone. Do the Phillies have dependable players? Utley, Howard, Rollins, Byrd, Papelbon, and Ruiz all represent a core of veterans, but none have dependable and durable skills at this point in their careers. The only players with those credentials on the team at all are Hamels and Lee, which usually isn't enough. Add in Asche, Brown, and Revere to the mix and you've basically got question marks and uncertainty, and thus risk rife throughout the entire squad.

Over the last few weeks, I've found myself attempting to defend the Phillies' offseason moves so far. The Byrd and Ruiz deals have positive aspects to them. The issue I've recently found when thinking about the team and it's current trajectory is that while these moves aren't albatrosses, they aren't the right moves to make for this team at this point. Had the Yankees, am 85 win team this past season, made similar moves writers and pundits would champion them as smart and fitting. The Phillies needed to either move their team uncertainty towards younger players, or remove it all together by signing, trading, or acquiring dependable, durable, and productive players. Given that the latter option rarely exists, the former should have stood out as the most reasonable solution. It wouldn't have been a waving of the white flag because it probably would not have adversely affected the team's 2014 record on a grand scale.

The New York Mets quietly won one more game than the Phillies last season, but did so with players like Juan Lagares, Josh Satin, Omar Quintanilla, Scott Rice, Jeremy Hefner, and Andrew Brown. Other teams facing similar situations like the Brewers and Padres won more games than the Phillies, while putting together lineups that included players like Chris Denorfia, Alexei Amarista, Tyson Ross, Scooter Gannett, and Jeff Bianchi. Whatever the outcomes of this offseason and the 2014 regular season may be, the Phillies need to change the current paradigm from placing their risk, the marginal wins on older less dependable veterans, and shift that uncertainty to young talent. Currently the team's strategy reminds me of the Stealers Wheel song "Stuck in the Middle With You"

"Trying to make some sense of it all,But I can see that it makes no sense at all,Is it cool to go to sleep on the floor,'Cause I don't think that I can take anymoreClowns to the left of me, Jokers to the right,Here I am, stuck in the middle with you."

Changing the manner by which you do business isn't easy. Teams map out overarching strategies for each aspect of the organization, and once entrenched in those marching orders, it becomes more and more difficult to alter the course. Fortunately, as the Red Sox recently proved, teams with money, a devoted fan base, and a recent history of winning can make those necessary changes, oftentimes with barely a full season of discomfort between the rotten past and new bright future. The key to remember though, is that one trade, one signing, or one good draft won't make the difference required, instead the adjustments must come in the governing principles.