I was there for five and a half innings, anyway.

Share All sharing options for: 2008 World Series Five Year Anniversary Revisit - Game Five: I Was There

That was, more or less, my mantra for two hours on an October evening in 2008. Maybe I should back up a bit. How did I get there?

I should note here that I'm not going to be writing game recaps or anything. Those are freely available, and my five year old memory isn't all that good, and you all know what happened. Instead, I would like to share with you some stream-of-consciousness musings about what prompted a man from Alaska to take a last minute trip across the country.

Well, it took awhile. Nearly a full day, including layovers. Of course, I probably could have come up with a better route had I planned ahead, but who expected this? I didn't even think about going until NLCS Game Three, and I didn't book the trip until, oh, about 9:39PM Alaska time on 10/15/2008. Less than 30 seconds after the pennant winner. Air fare on Alaska Airlines: $1,689.

I scrounged, and found a room at the Hampton Inn at the airport for $237/night. Good god, actually. Wow. I had forgotten how expensive that was for an airport hotel.

So I'm in to this trip for over $4,500 already, not counting incidentals like, you know, food or beer or actually getting around the city because my cheapass hotel is at the airport. "Uh, honey? I have to tell you something." Needless to say, that conversation did not go well.

My father, an older and wiser Phillies fan, cautioned me that the Rays were probably a much better team. That the Phillies had never done well in the playoffs or against the American League, and that I should not get my hopes up. Psh. Yeah. Good luck with that last one.

Cole Hamels is awesome! Chase Utley is awesome! Brad Lidge is awesome! Keep in mind, I'm watching this on McCarvervision. Fantastic. We stole a game on the road. We might actually win this! OMG!

After a "brief" plane flight, I arrived in Philadelphia late in the evening of October 24th. The following day, Saturday, donning my Alaska Nanooks jersey, I swung into the Spectrum, and enjoyed the hell out of a 6-3 walloping of the New Jersey Devils. Hey! You Suck! (side note, apparently that taunt is not as widespread as I thought?)

Walking from the Spectrum across to the Bank was about a half step from "awe-inspiring" on the impression scale. I mean, I've been to the Vet, the Kingdome, Yankee Stadium, Wrigley, even the Carlson Center; but never, not once had I seen this much energy in the random straggling outside a sports venue. Of course, I had no ticket, and I had no idea where I was going, expecting to have to cab off to some random sports bar somewhere. Then it happened.

"Hey, hockey guy, you wanna come with us to McFaddens?"

What? Two girls, evidently up from George Washington U, who likewise didn't have tickets. No idea why they thought the weird guy by himself in the unrecognizable hockey jersey was worth talking to. But they did, and together we found the line. Turns out it's easier to get inside if you're in a group. Huh. Well, I wasn't gonna complain.

Oh man, was this awesome or what. OMG OMG OMG OMG OMG OMG OMG OMG. I'm not much of a beer drinker, but I must have had ten of those aluminum bottles of Bud. Terrible stuff, but whatever. Plus, it started raining--a portent of things to come. But, also, guys, CHASE FUCKING UTLEY! OMG! (swoons). Up 2-1 in the series. You know, this could actually work.

I think I had to wait two hours to catch a cab after the game. And I never saw the GW girls again. Eh.

OMG! But first, FOOTBALL! I hadn't seen a real football game since I don't know when. The Eagles trounced the Falcons, 27-14; and I was lectured by an absolute idiot why I should vote for McCain-Palin. I informed this guy that I lived in Alaska, had voted for Palin twice before, and that this was enough; and he accused me of being a socialist. Assholes everywhere, it seems.

Anyway, on to the main event. Section 432. OMG. I'm in the ballpark and... wow. This was my first visit to Citizens' Bank Park, and it did not disappoint. I'd of course seen photos and such, but those are not the same. Prior to this, the last big league park I'd visited had been Seattle's SafeCo Field, which, while certainly no slouch, is a pale comparison. We've got it good, folks.

And such wonderful time-wasters! I stopped by the Build-a-Phanatic booth, and built a Phanatic. I bought a Jamie Moyer 50 jersey (I had to order it, if you can believe it). I ate cheesesteak and pretzel and found my seat. 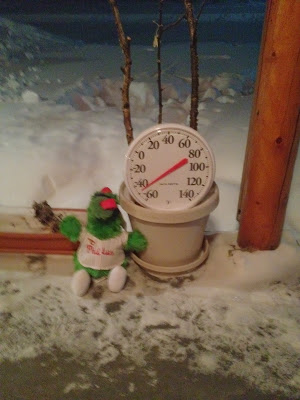 My Phanatic enjoying some of Alaska's finest.

Did you know they'll text you when your custom jersey is finished? Also, EVA! EVA! EVA! That was probably the second most awesome chant I have ever had the privilege of participating in.

But mostly Blanton. He was the first pitcher in more than 30 years to homer in the Fall Classic. How awesome is that. And he hit it off Edwin Jackson. Jackson, of course, was pitching in relief of Andy Sonnanstine, who was himself pinch-hit for by Eric Hinske. Who also homered. The first time in World Series history that a homerun has come out of each pitchers' spot in the order.

But first, the game. Of course, it was a rainy day. It, quite literally, rained all day. The whole thing was played in therain. By the third inning, it was unpleasant enough to have been called under any normal circumstances.

But it was played, if poorly.

After what seemed like innumerable dropped popups and misplayed routine plays, crew chief Satan McHitler suspended the game. I mean, of course they should have called it, but still.

On the Fox broadcast sometime in the middle of the fifth inning, there was a panning shot showing row after row of mostly empty seats populated by a few diehards. One of those phorlorn phans was myself. Pundemonium ensues.

So. That's that, is it Bud? I miss out on the ultimate game of this World Series? Fuck you. I tried to extend my trip. No luck on the hotel; no luck on the flights. I probably could have crashed with some (admittedly distant) family, but it would have been a week before I could catch another flight. Not gonna work.

I swear, American Airlines is the worst. Or, they were five years ago. As much as my fellow Alaskans like to complain about being gypped by Alaska Airlines, we actually are quite spoiled. With, you know, actually functional aircraft. I think AA Flight FUCKOFFPASSENGERS from Philadelphia to Chicago spent ninety thousand years on the tarmac due to "inconsistent weather." My seat had no tray table. It didn't recline. It was eight billion degrees. "Due to the turbulence, we will not be serving thimblefuls of warm soda this evening. We apologize for the inconvenience; now please, sit back, relax, and enjoy our ∞ hour flight across the surface of the sun."

So, back in Fairbanks Alaska.

I mean, I love this town; I really do, or I wouldn't have spent 25 years here. But, man, it was 13 degrees below zero when this game finally fucking resumed; having been about 50 when it started. That's got to be a record of some kind.

But who gives a shit, right?

Someone else said it better than I could have: "the oh-two pitch... SWING AND A MISS, STRUCK HIM OUT, THE PHILADELPHIA PHILLIES ARE THE 2008 WORLD CHAMPIONS OF BASEBALL."

Arguably, someone else said it even better: "World Champions. World FUCKING CHAMPIONS!" Of course, i was long gone by the time of the parade. Nevertheless, I was there. Mostly. And I will do my damnedest to make sure I'm there next time.

Postscript: The following year? 2009? I decided it was "too expensive." (facepalm, no, no it wasn't) This is the lesson, kids. If your team is in the World Series, or the Stanley Cup or the Super Bowl or the Whatever Title, then fucking go if you can, because they might be the Phillies and never go again.

I hope you've enjoyed my rant down Memory Lane. I certainly have, even if I've been trespassed by the neighborhood watch. Please forgive the factual errors and the parts that were obviously written while intoxicated. Or don't, whichever.