I went to Citizens Bank Park with my son for a game and came home with an annoying puzzle. And an unsolved mystery...

I went to see the Phillies this summer with my son. It was toward the end of the year, and he wanted to spend some of his savings from child labor earnings.  So we found a puzzle picture of Citizens Bank Park with the Phillies playing and a full stadium (for real!).

We finally got around to putting it together over the last few weeks, getting hung up on the small pieces that don't have obvious "fits" all the time and having a nightmarish amount of largely indistinct sky.  Here is an "in progress" version of the puzzle showing the "hard part" as incomplete: 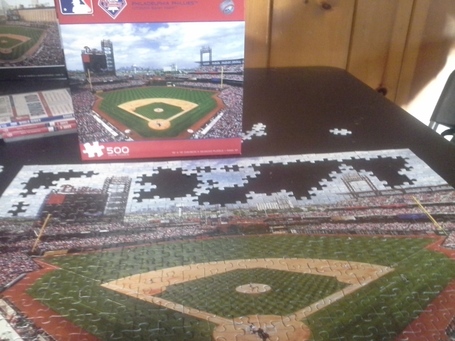 Yes, that is an amazingly washed out photo, right?  I am le suck at taking pictures.  Also, my patience for doing sky is very limited. Still, "we"  (I) managed to get it done earlier this week so we could use the card table again for things like this.  And that is my 2008 World Series DVD set on the table, along with a Camden Yards puzzle of the same ilk -- it is easily distinguishable because of the Eutaw Street warehouse visible in right field.

I did actually complete the puzzle: 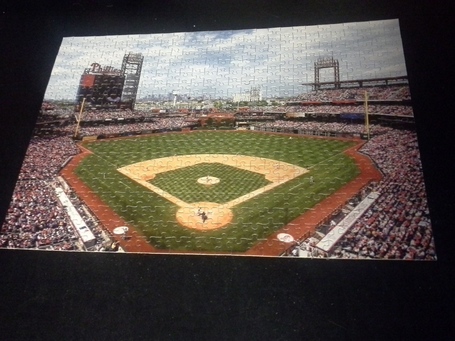 I was left with a mystery, though:

When was this picture taken?

I spent a long time looking at the picture, trying to fit the sky in and trying to find the errors my kids made in doing the edges.  I began to wonder more and more about the game.  I decided to find out when this picture was taken.

I started with Furcal.  He left LA in 2011, so it was earlier than that.  I tried searching for Hamels and Billingsley matchups, but came up without much that was helpful.  Somewhat stonewalled, I looked at Orlando Hudson, who turned out to be my Rosetta Stone.

Orlando Hudson played in LA only during 2009.  I went to Baseball-Reference.com and looked for the Phillies' home series against LA that year: May 12 - 14, 2009.  Hamels started on the 14th.  So did Billingsly.  Yahtzee!

The Phillies ended up losing the game 5 - 3, with Chad Durbin taking the loss.  When I unearthed that, my son just laughed.  Here's the box score and everything else you need to know about the game.

I flipped over the puzzle box and wrote the information on the back of it.  It was a nifty little treasure hunt, but it occurred to me that it would be nice if the team listed that information on the box or somewhere in the packaging.  Also, the manufacturer could certainly make better-fitting pieces.  At times, they were less than satisfactory.  The folks who make this series of puzzles (ubiquitous in state and national park gift shops) make an excellent puzzle with pieces that fit clearly and obviously.

As a souvenir puzzle, it was sub-optimal.  As a mystery, it was a lot more fun.