Overpaid/Underpaid in the NL East

How many Phillies are overpaid, relative to the market rate for free agents? How does that compare to their NL East rivals?

Share All sharing options for: Overpaid/Underpaid in the NL East

We know the Phillies have some bad contracts, and so will have several players in 2014 that can be said to be "overpaid".

But how many players are considered overpaid on the Phillies, and how does that compare to other teams in the division?

The table below calculates cost per WAR for each team's eight regulars, and its starting pitchers and key relievers. The cost is their 2014 salary, including Matt Swartz's estimates for arbitration-eligible players. WAR is from the 2014 Steamer projections.

Any $/WAR in the $5-7 million range is considered "market rate".  Anything above is "overpaid", and anything below "underpaid". 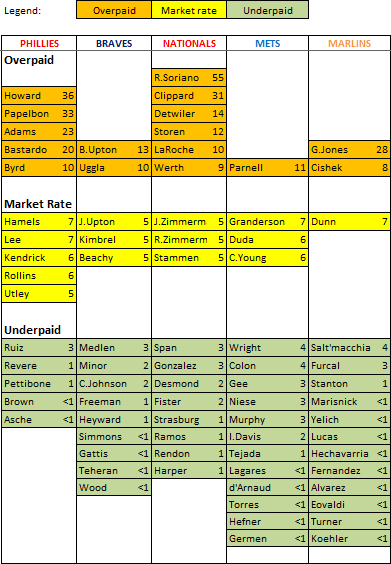 (The table uses Steamer's 0.8 fWAR projection for Marlon Byrd, which many see as pessimistic. Using Oliver's 1.8 projection translates to $4.4 M/WAR.)

Anyway, some observations:
The Phils have the fewest players who are expected to be underpaid in 2014. Howard, Papelbon, and Adams head the list of overpaid players, as expected, but Bastardo makes a surprise appearance there thanks to his anticipated $2.0 million arbitration award.
Washington has a highly paid bullpen, contributing to a division-high six players who are projected to be overpaid, one more than the Phillies. In Miami, two relievers (Cishek and Dunn), and the newly signed Garrett Jones, are the only players expected to earn at or above the market rate.