First in Cheesesteaks, First in Soft Pretzels, and Last in First Round Draftpicks

Since 2000, every single MLB team has had more first-round draft picks than the Phillies. Even including the supplemental compensation picks, they are tied for last in the number of picks before the second round.

Share All sharing options for: First in Cheesesteaks, First in Soft Pretzels, and Last in First Round Draftpicks

Due in part to a "win-now" strategy, and despite some notable first round successes in the early 2000s, since the turn of the milennium the Phillies have had only 9 first round draft picks, the fewest of any major league team.

If we include compensation picks, the number increases to 15 picks before the second round, but that total is still tied for dead last in the majors: 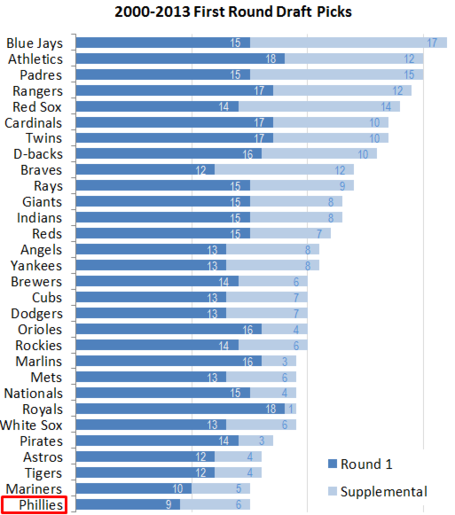 Below are the numbers behind the graph. In addition to the number of picks, this includes a "slot value" to attempt to differentiate earlier first round picks from later ones. A pick's value is the average WAR value at that slot, by taking the data from this article and smoothing out the ups and downs so that a later pick always has a lower value: 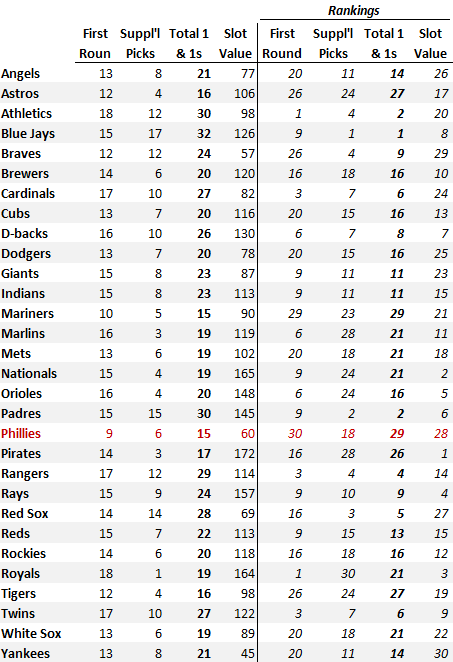 Where have all the draft picks gone?

Below is the Phillies' first-round history since 2000: 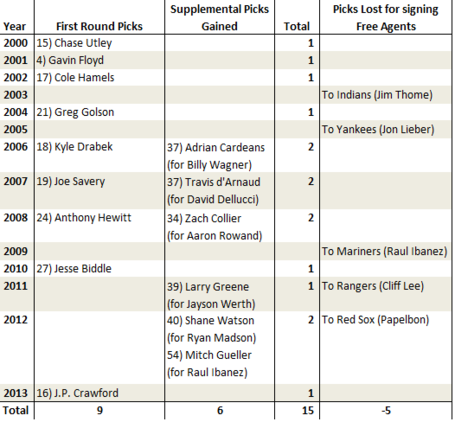 Not only have the Phillies had the fewest first round picks, but they have also traded away many of those precious few:

Of their 15 first round and supplemental picks since 2000, five have been traded away:

Other than the travesty that the Garcia trade turned into, most of these turned out pretty well. Blanton ate a lot of innings (insert joke here) and was a key part of the 2008 championship team. Cardenas is out of baseball, although I suppose it's possible things may have gone differently had he remained with the Phillies. Mayberry has done much more than Golson to date, but his Phillies career may end today while Golson, at 28, is young enough to still accomplish something. Drabek turns 26 on Sunday and may yet fulfill his promise, and d'Arnaud appears poised for at least a decent career, but Halladay gave the Phillies two Cy Young-worthy seasons before succumbing to age and injury.

The Phillies' rank in the number of picks has at least improved somewhat in recent years:

Number of first round picks...

After losing 3 first round picks in 4 years from 2009 to 2012, it was encouraging to see that they avoided that fate in last year's free agent market, and since their first pick is protected by virtue of their bottom-10 finish in 2013, we look forward to another first rounder in next year's draft, and a high #7 overall pick at that.

Of course, it doesn't matter how many picks you get if they wind up being as underwhelming as Larry Greene has been thus far, or Joe Savery or Anthony Hewitt before him.