He wasn't really that much of a Phillies fan. But the man fed my habit, and loved Robin Roberts and Steve Carlton. That counts.

Share All sharing options for: Phillies Fan Obituary: My Father, Mentioned in Passing

Early in the morning of November 22, my father died at the age of 81 after suffering a stroke. Earlier the previous day, after finishing breakfast, he told my mother he felt dizzy and collapsed at the kitchen sink. He never regained consciousness.

Amid the condolences and services, I've been bothered most about what goes missing. Obituaries are mere highlight reels; photos and mementos gathered for the viewing and luncheon are smaller versions of curated museum collections. So much of our lives are seams and intersections that simply unravel in death, or dissipate onto friends or family members like so many hotel guests leaving a reception and returning to their rooms. What aggravates is what's lost: Who are those people in these 2x2-inch black and white photos from South and West Philadelphia during the Depression? Why does this memento hang in the basement? The things and questions hang there, in silence, unanswered. Emotionally I'm brought to a similar state as when I watched, with fellow bloglord David S. Cohen sitting to my left high in the upper right field deck, Ryan Howard crumple to the ground at the end of the 2011 NLDS: this instant metacognition of a waitwhat? moment I can still recall in detail. There was Howard, just a bit up the baseline, the training staff rushing out of the dugout. The Cardinals streaming out of the dugout, surrounded by men with handheld TV cameras. On the PhanaVision, the Phillies logo with the swirling P played in a loop. Above Citizens Bank Park an orange and white TBS blimp promoting Conan O'Brien. And thousands of people, near silent. (Or close to it. This video approximates the vantage point, though the priggish Yankee-fan editorializing isn't mine). 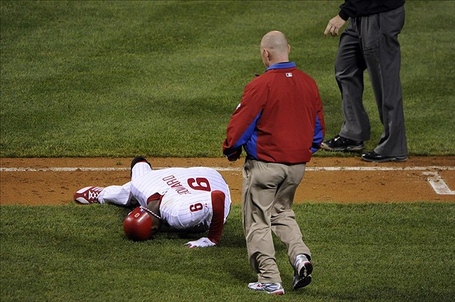 So for those of you who know me as a poet, let me be a bit more clear on the metaphors here. The place where I am is really in the background noise on that video. Other details certainly fill in nicely: the suddenness, the pain, but also the realization, too, that such ends can be reasonably expected of octogenarians with histories of emphysema, chronic heart failure, cardiopulmonary disease, and 102-win baseball teams in a 5-game playoff format, no matter how much you love them.

My father said it started with a Phillies decal he put in his window that read, "Baseball Heaven in '47." The Phillies were not only bad that year (60-92, finishing seventh in the eight-team National League), they were historically loathesome, forever enshrined in the annals of baseball's sordid integration story as being the worst team Jackie Robinson faced when he broke into the major leagues. The team had Harry "The Hat" Walker, Dutch Leonard, an over-the-hill but still competent Schoolboy Rowe, and a lot of nobodies (although a young Del Ennis shows up, as does Andy Seminick). The 1947 team surely wasn't identical to the 2013 version, but I'd say there's more similarities than differences. Plus he loved Harry Chapin, so give a listen.

Things changed for the better next year, as the Phillies added rookie Robin Roberts, who was my father's favorite pitcher. Curiously, he never went into too much about why, other than what most people cite: the durability, the talent, the class, the perseverance in later years despite being lashed again to a ship of baseball fools. Maybe that's really more than enough, and maybe his real love was football anyway. His high school yearbook from West Catholic High School in 1949 paints a picture of a Philadelphia sports scene that was another world, where crowds for high school football games at Shibe Park were larger than most games for either the A's or the Phillies at the time. He would say that the quality of baseball games between the majors and the semipro, religious and Negro League exhibitions he saw was about the same, so there was no real passion for baseball. He said while his older brothers were bothered by the A's move out of town in the 1950s, it didn't really phase him. The Eagles were a cartoonish sideshow while he was growing up. The big college football games were at Penn, though he preferred watching semi-pro company teams play. The Army-Navy game was the annual big show in town.

For our wedding, my wife bought me a Mitchell and Ness throwback jersey with Roberts' 36 on it. At the time she regretted she didn't get Ashburn's number 1. I told her it didn't matter, and as the years have gone on I've loved it more and more. For one thing, I almost never see another one at a game. For another, I'll continue to love it more and more. The best metaphors work that way. 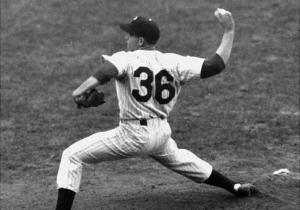 He didn't talk about 1964. It had less to do with heartbreak than it did with four girls under the age of seven, trying to build his own law practice, and dabbling in local politics as a Kennedy-era Democrat. I'm sure there was no time. But the 1970s would change that, as the allure of a new ballpark, a boy and young daughters who were playing softball, a good team, and a tall and talented lefthander (Steve Carlton) were lures. His specialty was taking us to a twi-night doubleheader, preferably against the Cardinals (he liked their uniforms) when Carlton was pitching. To this day I remember arriving mid-way through the first game, walking around the concrete behemoth we knew as Veterans Stadium, and hearing the place erupt after every hit, the metal bleachers of the 700 level rattling away in all their $0.50 cent per ticket glory. I remember sitting in the left field behind the foul pole late one game, being awakened by my sisters to a Bull Blast flying our way that clanged off the pole for a home run. For special treats he would take me along into the superboxes, if he was invited there by the bank managers that helped him administer the details of the possessions of his clients that continue to make up nine-tenths of the kind of law he practiced. All-you-can eat spreads and great views of a good ballclub. I was young and and in love with a team in its own glorious Hot Pants era.

I spent my summers upstate and away from the day-to-day progress. Friday nights, when he joined us for the weekends, were when I would gorge on the week's worth of Inquirers and catch up on box scores and standings, and soft pretzels he would get from his vendor in the concourse near Suburban Station. If we could, on clear nights, we'd listen into the weekend night games on the radio, where we could just barely catch the AM waves on KYW. As I grew older and stayed at home for jobs or through college, we'd drive up together trying to stretch the radio signal as it faded away in the dark hills near Pottsville. In later years, in the same cottage, I'd show him MLB audio over the WiFi we cribbed from our neighbor's kindly open network. His amazement was palpable. Yet through last summer he never changed, and when he could he'd still listen to the radio.

In 1980 I remember him the best: I was 12, and into the Phillies and knowledgeable about the game. We watched most of the games of the playoffs, though I remember, curiously, being out on an errand with him at the mall during game four of the NLCS against the Astros, circling back to the TV sections of department stores when we could until finally catching the thrilling end at home. My older sister got mono during the World Series, and I remember watching game 6 with her and my father, all of us sweating it out for various reasons, as Tug McGraw struck out Willie Wilson. 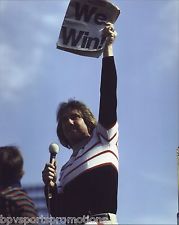 As I grew older we went less and less often, and my friends went more and more. We might go once or twice a year, but he knew it was my friends who were really passionate. He'd keep up, because he loved the game, and had law partners who were inveterate prospectheads in the office; I needed to keep him filled in. He loved to hear me talk about the blog, but he never was a confident enough web surfer to understand just what I did on it. He loved the annuals, and loved what I wrote (of course). But the man taught me how to write, so, the only way to conclude is to move it along. I find this more than apt from my poem for this year's annual, "Teeming Transition," as true of the 2013 Phillies as it is of me now:

Hermes, though he had plus speed, was not known for excellence

(No one middling ever is), and sentimentally cast his lot with a bunch of journeymen.

Dante knew too, that middle age

Is a time to explore hell, to be led by ancient storytellers who

Descend us in circles of loss and hatred and greed, and dive into the fiery lake where,

At rock bottom, we are frozen and suicidal

Left to watch Howard and Utley

(Or is that Halladay and Lee

Or Rollins and Ruiz?)

Singing in the rain of a teeming transition,

The very hardest part of labor, where the animal life-force takes over

And maternal muscles contract like a steam engine, propelling us into relentless future

In excruciating pain, screaming in generational fury, and

Slumping, from Allentown, to be born again.

The picture I have at the top of this article is among the last times I went with him to a game; it was 2004; Citizens Bank Park had just opened and my wife, new baby boy, and nephew went in for my nephew's birthday to watch the Phillies play the Expos on a bright sunny April day. With his health declining over the past few years, as much as I wanted to I couldn't get him to go to just one more game. That sounds tragic, but I have no regrets in offering and didn't want to drag him to somewhere he'd be uncomfortable. It's my turn to watch with my boys. The last baseball game he wound up seeing, as it would turn out, was my 8-year-old son's fall ball game at a field near his house back in October. It was a great season for the team, and the coaches (of which I was one) worked the boys really hard getting them as many swings on the stick as we could. As for my son, he developed into a lanky-swinging Von Hayes like lefty batter who throws right, which I know my father loved. 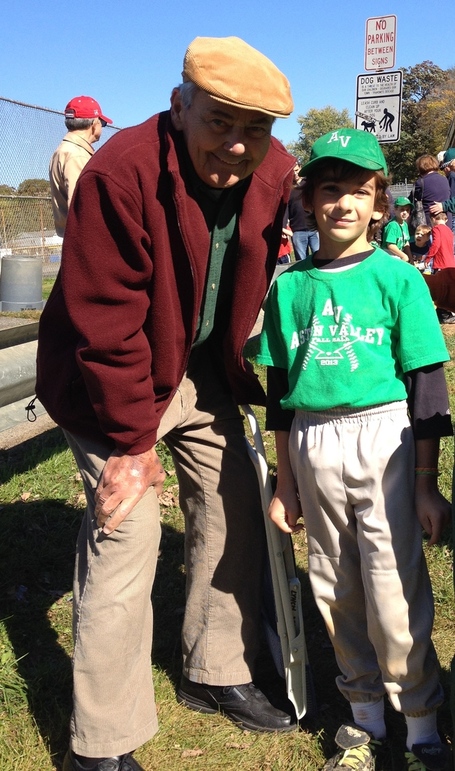