Jimmy Rollins and the Hall of Fame

Jimmy Rollins has already compiled impressive stats for a shortstop, and has a chance to improve them further over the next few years. It's not clear whether that will be enough to get him serious consideration for the Hall of Fame.

Share All sharing options for: Jimmy Rollins and the Hall of Fame

Over the past year or two, Jimmy Rollins' career totals have been climbing ever higher on the Phillies' all-time lists for several key stats. Rollins has even accomplished some things that only a few in baseball history have done:

- Ten 30-steal seasons, tied for 18th in MLB history, and behind only Ozzie Smith and Bert Campaneris (11 each) among shortstops.
- Six 100-run seasons , 3rd among shortstops behind only Derek Jeter (13), and Alex Rodriguez (8).
- One of only 24 players in MLB history with 400 doubles, 400 steals, and 2,000 hits. The only shortstops to do it were Honus Wagner, Ozzie Smith, Omar Vizquel, and two from the turn of the last century, George Davis and Bill Dahlen.

And he still seems to be going strong, coming off a year, at age 33, in which he was injury-free and had one of the best seasons of his career. As a result, discussion occasionally turns to whether he has any shot at the Hall of Fame. His career stats are certainly starting to look impressive, and will only become more so over the next few years. Will it be enough to get him into the Hall, or will he end up as one of the many borderline candidates who are not quite good enough to garner the support needed to get in?

There are 21 shortstops in the Hall of Fame (including Ernie Banks, who spent about half his career at first base, but excluding George Wright and Leo Durocher, who played the position but were inducted as a "pioneer", and a manager, respectively) . That number will almost certainly grow by two by the time Jimmy Rollins is eligible in about ten years: Derek Jeter, and Alex Rodriguez (whose candidacy may be held back by PED allegations, but we'll assume for this exercise that he gets in in short order). That will bring the number of shortstops in the Hall to 23.

Rollins likely has a few years left in him, so there is still a lot of uncertainty regarding where his final career stats will wind up. Will his mid-to-late thirties be like those of Bill Russell, who had a very good year at 33, but then declined rapidly? Or more like Ozzie Smith, who was still productive at 41? While we don't know the answer to that, we can lay out some possible scenarios and see how each one would affect his chances for induction.

Below are three scenarios:

"Medium": he averages 138 games through 2015, then plays part time for three more years. This scenario corresponds to projections from the "Favorite Toy", a simple formula that was developed by Bill James to predict total career stats based on age and recent performance. There is a page for it on ESPN.com -- for example, this is the projection for Rollins' career hits: link
(50% chance of reaching this level)

There are two Hall of Fame predictors, also developed by James, which try to answer the question "Are they likely to get in?" (as opposed to "should they get in?"):
- Hall of Fame Monitor
- Hall of Fame Standards

They were developed before the PED controversy, and they assume that Hall voters pay little attention, if any, to advanced stats. Baseball-reference.com describes them here.

BB-Ref has one other useful metric, called JAWS, which averages a player's career WAR with the total WAR in their seven best seasons (not necessarily consecutive), so it's meant to measure the combination of career-long production and the quality of a player's peak.

The table below shows, from left to right:

- where Rollins sits today
- where he would end up under each of the three scenarios described above
- the median (i.e. 12th ranked) stat among the 23 Hall of Fame shortstops 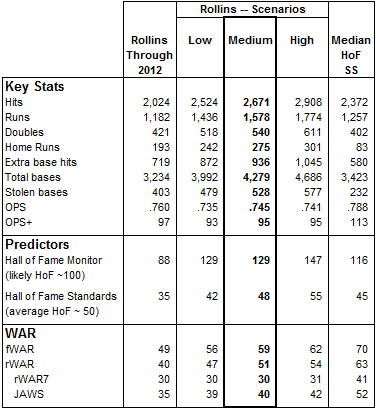 The Hall predictors don't include OPS, and so according to them, Rollins is either comfortably in the range, in the case of the Monitor (129 vs. median of 116), or at least at the low end (42 vs. 45).

Then we get to the other area where Rollins falls short. Wins Above Replacement doesn't matter much now, because the vast majority of voters don't consider it, but it's likely it will matter more in ten years.

How will Rollins compare to those already in the Hall?

This shows how each number will rank among the 23 shortstops expected to be in the Hall when Rollins becomes eligible: 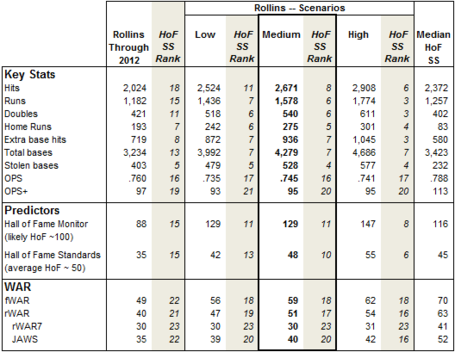 The "Medium" scenario puts Rollins in the top 8 of 23 Hall of Famers in all of the key stats, except, again, for OPS and OPS+ where he is near the bottom of the range.

The strength of those counting stats makes both his Monitor and Standards scores very respectable better than at least half the shortstops in the Hall.

And again WAR ranks relatively low. I believe that the gradual acceptance of WAR and other SABR concepts by the members of the BBWAA will be bad news for Rollins' candidacy, and so even in the most optimistic scenario, he will be regarded as a very good shortstop, but more of an "accumulator" -- not in the sense that he racked up stats for individual glory, but that he was able to last a long time and grow his counting stats, without sustaining a peak long enough to merit serious Hall of Fame consideration.

Comparison to non-Hall of Famers

Rollins' already weak chances will be hurt further if there are shortstops who are not in the Hall and who are viewed as his equal or better.

Comparisons like this are problematic for Rollins. Tejada seems to be about done, Renteria didn't play in 2012 and is considering making his retirement official, and Furcal likely won't have Rollins' counting stats in the end, but the fact that reasonable comparisons can be made to players who are viewed as good-but-not-great will hurt him.

Next, below are Rollins' projected stats (the "medium" scenario), along with four other shortstops who, while they may not have strong Hall of Fame cases, at least have some stats that may look comparable to Rollins'. Omar Vizquel, for example, also has limited chances for induction, but, in addition to stellar defensive credentials, he lasted a long time and racked up impressive counting stats, particularly his 2,877 hits:

If Alan Trammell is still not in the Hall when Rollins becomes eligible, it will be a major impediment to Rollins' getting enough support. If Rollins were to become eligible today (with his eventual totals), with no hint of PED allegations, and with much better counting stats than Trammell, his chances might be pretty good. But I think that with the continued acceptance of SABR stats, Trammel's candidacy will be viewed in a more favorable light in the future, at the expense of Rollins. That's assuming Trammel fails to get voted in by the BBWAA and must rely on the Veterans Committee at some later point.

However, with three more years of eligibility remaining on the BBWAA ballot, Trammell's chances have looked better lately. The percentage of votes he received languished in the 13%-18% range for his first eight years on the ballot, but climbed to 22.4%, 24.3%, and 36.8% in 2010-12, before dipping to 33.6% amid the turmoil of this year's voting. If it were to happen, Trammell's induction would remove one major obstacle for Rollins.

One other comparison that's of interest is Rollins vs. Barry Larkin, the most recently inducted shortstop:

Larkin was clearly the better hitter, and compiled more WAR (in less time), but Rollins' counting stats are enough to make the predictor numbers very similar.

Below is the cumulative fWAR graph for several of those mentioned above (click to enlarge): 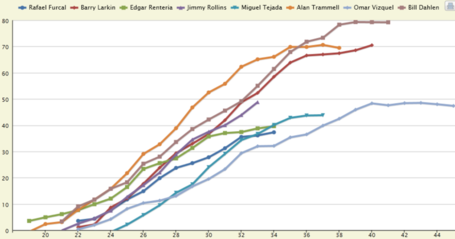 This is rWAR for all Hall of Fame shortstops, and how Rollins compares, both today and under the three scenarios ( click to enlarge): 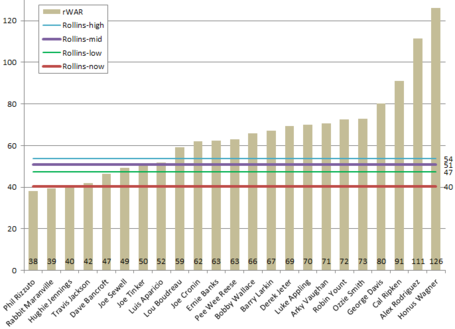 Note: Jeter's and Rodriguez' rWAR though 2012

Rollins reaches the neighborhood of Joe Tinker (50) and Luis Apparicio (52), but without a poem to immortalize him, or recognition as the best of his generation, in Rollins' case that kind of WAR will not be enough to get substantial support from the voters of the mid-2020s.

In summary, Rollins has some positives, but also some negatives:

Jimmy Rollins has a chance to rack up some of the most impressive hitting stats by a shortstop in the long history of baseball. The luster of those impressive stats would always have been dimmed some by his lower batting average and OPS, which, while still very good for a shortstop, are at the low end of the range for shortstops in the Hall of Fame, and even compared to some who are still not in.

In addition, SABR concepts, and in particular WAR, continue making their way into the mainstream, and more to the point, into the thinking of Hall of Fame voters, and I envision they will be used much more in judging Hall candidates when Rollins becomes eligible in nine or ten years. The fact that there will likely only be a handful of shortstops in the Hall with lower career WAR than what he is projected to compile, will be a tough hurdle for Rollins to overcome.