I take a step back from my burning hatred of the clothing line created by the star of Charmed and Who's The Boss?.

I recently got into an email discussion with a few fellow TGP bloggers about the HBO show Girls. I like it, and I like Lena Dunham. She's a woman with a strong vision and she wants to share that. I think television needs more women like that, least of all because I'm a woman and I want to see more entertainment by women. I want something that's for me -- that's what a lot of people want out of their entertainment (though not the only thing). Last TV season, before Girls, there were a few shows both created by and starring women. Unfortunately, that woman was Whitney Cummings. I watched the ratings grabber 2 Broke Girls (which Cummings created) a few times before getting too frustrated by how borderline racist and unfunny the jokes were. I even watched two episodes of Whitney before I decided it was just too stupid for me to waste my time on. But these shows exist. Shows created by and starring women. There just aren't many, and most of them are not for me.

Which got me thinking about baseball merchandising for women. My mindset on entertainment is the same as baseball merchandise -- I want more that's aimed toward me, a woman. And there is something out there that's aimed toward me. The Touch by Alyssa Milano clothing line. Now, I hate the Touch collection. I really do. I've said that a lot. It tries to blend "fashionable" clothes with team branding, which is something I do not care for. (If the version of "fashion" they used wasn't so ugly, I'd reconsider.) But it seems to be extremely popular. In addition to baseball, there are Touch collections for teams in the NFL, NHL, NBA, and NCAA.

I'm going to try and reevaluate a few Phillies items from this collection in a very non-me way. I want to see if I can figure out what the appeal of these clothes are. 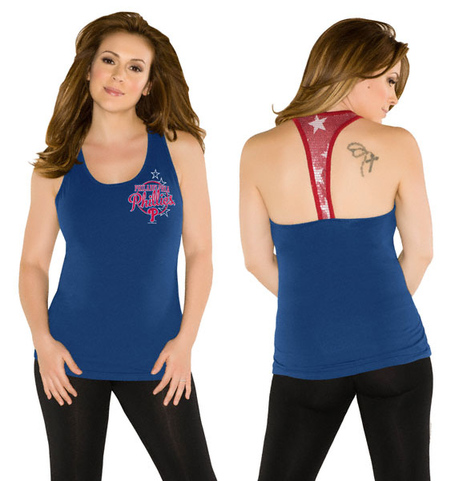 Let's start with something simple: a tank top. Yes indeed, that sure is a tank top. Oh God, I don't know how to do this without mocking it! Ok, let me try this again. That picture above is of a tank top. For the most part, it looks like a relatively normal, non-controversial tank top. Over the heart of the wearer there is a strange, jazzed up Phillies logo. There's a circle and some stars and "Phillies" is in a loopy cursive font. The back of the tank top is also very, um, tank top like. There's a racer back with white stars over a red background and that whole little area is sequined to high heaven. Without the logo and the sequins this is just a nice tank top that you could wear anywhere. The racer back makes it more interesting than a traditional tank top and brings it a level above basic. 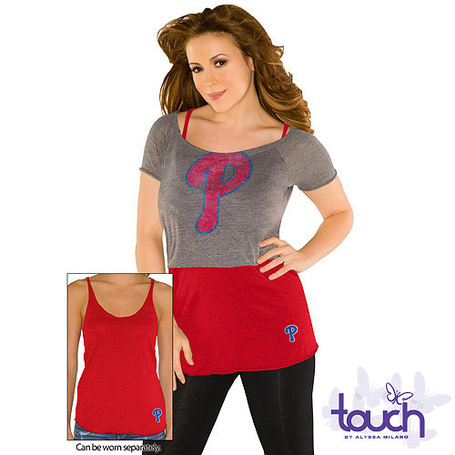 Ok, ok, this is a little harder. What...is...that? it *appears* to be some kind of tank top/shirt combo. The tank top is very, very basic. The only thing that sets it apart from a run-of-the-mill strappy tank top is the small, blue Phillies "P" on the bottom right. This part of the ensemble can be worn on its own. The crop top *could* be worn on its own (if you have access to a time machine and set it for 1993, perhaps), but it's meant to be worn on top the tank top. It's cropped around the waist, it has short sleeves, and the neckline is wide enough to show off the straps of the shirt underneath, so if you're cold you can put it over the tank and still be just as cold as you were before. Like the previous tank top, it's a step above basic. It's trying to be interesting, versatile, and stylish. (I am not the best person to ask if it actually accomplishes any of those goals.) 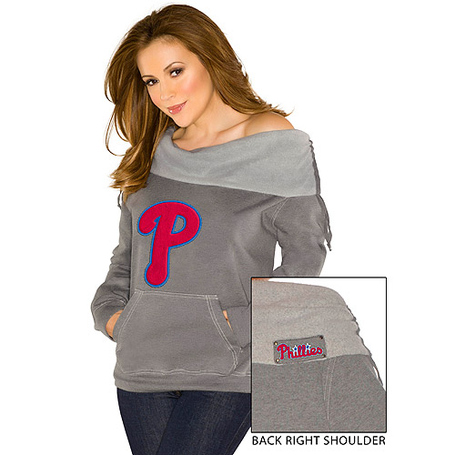 I don't know if I'll be able to get through this one without mocking it. What we have here is a front pocket sweatshirt with a large Phillies "P" on the front. But that's not all. Oh, no. That is most certainly not all. Instead of having a regular neckline or a hoodie or anything normal like that, this sweatshirt features a cowl neck. What's a cowl neck? It's a neckline with extra fabric for draping purposes, to allow the wearer the chance to inject some of their own personality into the garment. (Or something.) This particular cowl neck is so wide that it falls over one shoulder, leaving the shoulder completely bare and therefore defeating the purpose of the sweatshirt. So since this shirt doesn't keep the wearer warm, it's style they're after once again. Even the tiny Phillies logo on the back right shoulder is more about fashion than broadcasting your team's affiliation.

The Touch collection is really the 2 Broke Girls of baseball merchandise. CBS, which broadcasts 2 Broke Girls, is a huge network with a massive potential audience. They want to reach as many of them as possible with their programming, so to do that, their shows have to have a broad appeal. 2 Broke Girls often goes for the obvious (or cheap) joke to get the easy laugh. The Touch Collection is similar. To appeal to as many female fans/potential customers as possible, the clothes need to take the same broad approach. In this case, that approach seems to be adding a team element to fashionable clothing, so women don't need to decide between supporting their team and being "fashionable." Looking at the other items available in the women's section of the Phillies online shop, this seems to be the current trend for women's baseball apparel.

Unfortunately, there is no Girls of baseball merchandise. HBO is a subscriber only network with a smaller potential audience. That gives them the ability to take chances on shows like Girls that appeal to a very specific audience. HBO isn't trying to reach everyone. Of course they want more subscribers, but their structure frees them from needing to create content that appeals to a broad audience. MLB merchandising doesn't have that luxury, and I think it's unrealistic for me to expect that they'll cater to my wants and needs, especially since they don't seem to be in line with what sells well to female fans.

So, I still hate the Touch collection. But I don't think it's Satan's official clothing line anymore. There are a lot of lady baseball fans out there, and even though we're all different, these clothes are meant to appeal to as many of them as possible. Just because I don't like them doesn't mean they shouldn't exist. Everyone expresses their fandom in a different way, which is their right. Even though I really strongly dislike those clothes, it's not my place to say "You're doing it wrong! Stop wearing those clothes!" That's just bitchy, and I wouldn't want anyone telling me that. And even though I'm tempted to, I won't walk up to a fan of 2 Broke Girls and say "That show really blows. It's terrible. Stop watching it." Why won't I say that? Because it's mean, and I don't necessarily need to get into a fistfight today. Besides -- I have Girls to watch instead of that horrendous show! So while it's unrealistic to hope that the Girls of MLB merchandise will appear, I'm going to anyway. Girls didn't appear out of nowhere -- Lena Dunham had a story to tell and HBO felt that people would want to hear it. I'm just waiting for the same thing to happen with MLB merchandising.