Projections from the Steamer and Oliver models translate to 81 and 88 wins, respectively.

This is the latest in a series reviewing 2013 predictions from the various projection models. The models typically predict both rate and counting stats, but the counting stats are based on individual playing time assumptions that often don't make sense in aggregate.

In analyses like this one we make assumptions about how the team's plate appearances and innings pitched will be allocated, and then apply the projected rate stats to convert them to predictions of counting stats and the total runs they would generate. By estimating runs scored and runs allowed, we can then use the pythagorean formula to estimate the number of games the Phillies will win.

- Here we worked out that the projections in the Bill James model would mean 89 wins- Here we said that the ZiPS model projections would translate to 81 wins- Here we saw why the ZiPS projections indicate that the 95-win pace in the second half of 2012 is unlikely to be sustained in 2013 (partly because the 95 pace included about 6 wins attributable to luck, but mostly because the pitching will regress)
- Finally, here, we saw what kind of stats individual Phillies would have to deliver in 2013 in order for the team to win 95 games -- in short, nothing miraculous for anyone in particular, but everyone would have to perform at or near their best level of the past 2-3 years (and if they all did that at once, that would be miraculous).

To get right to the bottom line results, skip to the Conclusions section at the end.

As with previous versions, below are the playing time assumptions used to convert the projections to runs. 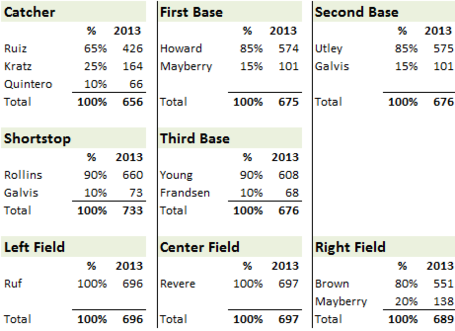 Note: for consistency with the analysis of other projections, and because I tend to think his 2013 impact will be minimal, I am choosing to ignore Delmon Young for this exercise.

Noteworthy about the Steamer forecast:

- it has very low expectations of Ben Revere and Freddy Galvis:

- it also has the lowest projection for Domonic Brown of all the systems reviewed to date:

Projected stats based on Steamer's projections and the above playing time assumptions:

Out of all the projection systems, Steamer also has the highest projected ERAs for the Phillies starting pitchers: 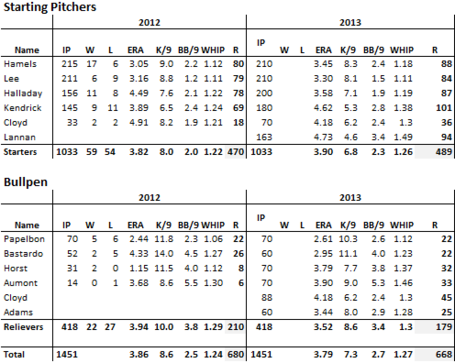 The most distinctive thing about the OLIVER projections is a very optimistic outlook for Darin Ruf:

On the other hand it has a rather dim view of Michael Young's prospects:

Projected stats based on Oliver's projections and the above playing time assumptions:

Overall, Oliver is on the optimistic side, particularly regarding the starting rotation. 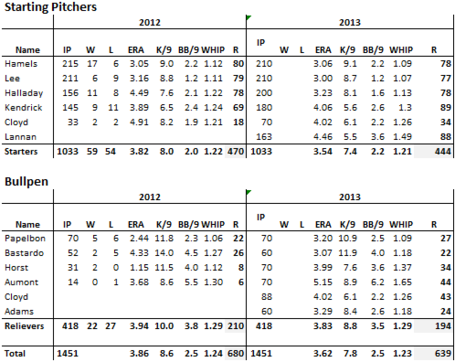 Below are the wOBA estimates from each of the projection systems (as well as the 95-win scenario), and how they compare to 2012. It's a lot of numbers, so focus on the color coding -- the greener the better. 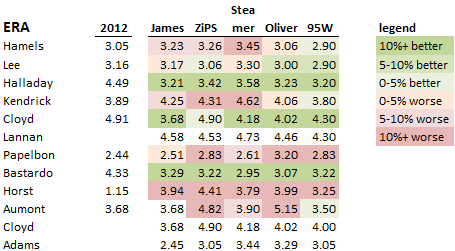 Below are the four systems (and the 95 win scenario), by position. For hitters, this is runs created, and for pitchers it's runs allowed. Any runs created projections that are at least five runs above or below the average of the four systems are highlighted as green on the high side (e.g. James' 83 RC at third base), or red on the low side (ZiPS' 82 RC at first). 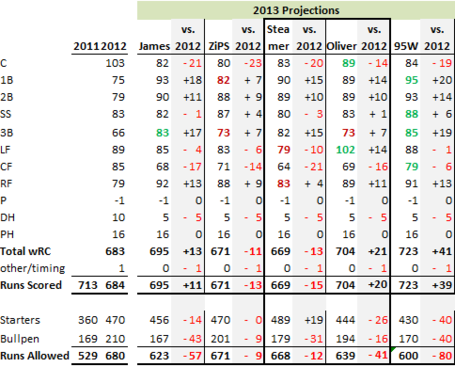 Using the pythagorean formula, we now have two sets of projections which translate to 81 wins (ZiPS and Steamer), and two translating to 88-89 wins (James and Oliver).

The average of the four systems (James, ZiPS, Steamer, Oliver) is 685 runs scored and 650 runs allowed, which translates to a .524 winning percentage and (drum roll) 85 wins.