Acquired in trade from the Rangers, Michael Young is the "heir apparent" at third base in 2013. Here's what to expect from the hot corner Dimebag.

Drafted by the Blue Jays in 1997, Young has spent his entire career in the Texas Rangers’ infield, covering all four positions in addition to designated hitter. His defense covers the map from mediocre to bad; and his bat has been deceivingly unimpressive. His career UZR/150 numbers are -6.8 at First Base, -1.6 at Second, -9.2 at Third and -10.1 at Short. He has never posted a positive UZR at 3B, with over 3,100 innings at the hot corner.

On the other side of the ledger, Young has a career .301/.347/.444/.791 line, which isn't especially bad for the infield left of 1B. He has amassed 22.1 rWAR and 29.0 fWAR, so depending on your metric of choice, he's helped his team more than some other guys have. In 2012, though, he was downright terrible, posting a negative WAR whichever way you looked at it. And his salary is going to be $16 million, so this trade sucks, right?

Not necessarily. Young has a career BABIP of .334 and a walk rate of 6.6%, but posted only a .299 BABIP and 5.1% walk rate respectively last year. If he can elevate those to his career norms, hardly a guarantee at age 36, his production should approach his 2010-2011 numbers, which earned him some (albeit stupid) MVP votes. And, of course, $10M of his salary is being paid by the Rangers; so if he can give us more than ~1.5 WAR of value, it'll be a reasonably worthwhile deal. Unless, of course, Lisalverto Bonilla and Josh Lindblom ever appear in the All-Star Game.

Ballpark factors may make some differences, as Young will spend half the season in OFJOAB, instead of the considerably more FJOABy Ballpark in Arlington; but Young's never been known for his homerun power. Furthermore, he'll switch out games decided pitcher's parks such as Kingdome II, the Big A and the Oakland Colosseum for the more neutral National's Park and Turner Field.

Sure there were other options, but how many times has Kevin Frandsen been an MVP? 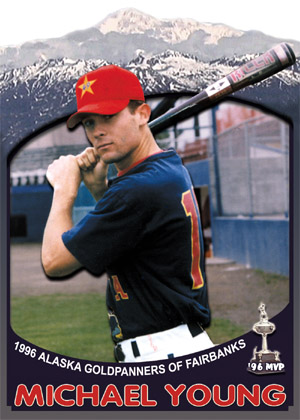 Have you ever met Captain Ramius, General? I actually met him once, at a Goldpanners' game. Booya. Of the over 250 Goldpanners' Alumni who have made the Major Leagues, only a handful have played for the Phillies; and of those, Michael Young likely has the highest profile. During his one season in Alaska, Young was overwhelmingly the best hitter on the team, with a .335/.419/.479/.898 line with 5 HR, despite committing over a dozen errors in 51 games at SS. As you can see from the picture above, however, he was the MVP that year. More recently, the National Baseball Congress named Young their 2012 Graduate of the Year.

We're rooting for you, Mike. We all are. All seven hundred thousand of us. After all, you were never an MVP in Texas.