Who Would Buy That? 2012 Trade Deadline Edition

Merchandise from players who have moved on is just sad.

Share All sharing options for: Who Would Buy That? 2012 Trade Deadline Edition

Players come and players go. They come to your team via trade or signing or king's proclamation (though that last one is less common these days) and merchandisers rush to get their shirts into the stores. Or a player has a nickname or catchphrase that should be plastered on any and every surface possible. Fans, excited by this new player or nickname or catchphrase, go out and buy the things and wear them. And then, of course, one day that player will leave, via trade or non-signing or a tank of angry sharks (again, that last one is not as common anymore, to our great detriment). And we're left with the remnants of their time with the team. A hole somewhere in the outfield or infield or pitching staff, and a lot of merchandise that doesn't make sense anymore. Let's look at some of it and ask ourselves, who would buy that? 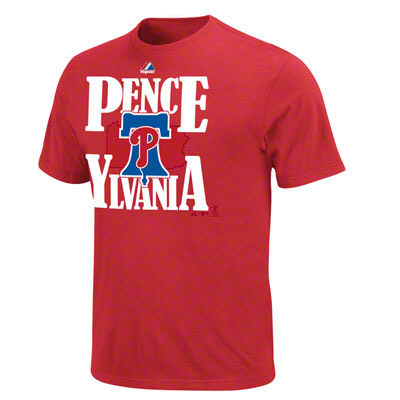 The catch phrases just write themselves sometimes, don't they? I couldn't find anything with "Let's Go Eat" on it, thank Christ, but this shirt is almost worse. Almost. At least Pence actually said "Let's go eat" and there was a story behind it that was cute and funny for a whopping five minutes. This, though? Yes, Hunter Pence's last name is the same as part of the name of the state in which he was playing at the time. What a charming coincidence! But what is the shirt trying to say? Does Pence rule the entire state now? Are they implying that Pence's last name came from Pennsylvania? Or that Pennsylvania was named back in the 1700s with Pence in mind (proving my long held belief that William Penn was at one point inhabited by Dr. Sam Beckett during one of his quantum leaps)? Or, perhaps, does this shirt make no fucking sense? It's not like Pence's nickname was "PENCE"ylvania. He didn't really have a nickname. Other than "Weird Bug Eyed Guy" or "That Dude That Keeps Falling Down in the Outfield" or "STOP SWINGING AT BALLS YOU HAVE NO CHANCE OF HITTING YOU MORON". I feel like any of those would have made more sense -- and better t-shirts -- than this one.

With Hunter Pence, I can't tell if the fanbase took to him so ardently that the merchandisers decided to make a bunch of Pence related stuff, or if the merchandisers saw a chance to make a gajillion dollars and the fans just followed the trail of shirts and catchphrases. Regardless, the shirt was produced and is still for sale, despite the fact that Pence was traded to the Giants and I demanded that all evidence of his time with the Phillies be destroyed. Sadly, decrees from the Supreme Blog Lady don't have the weight they once did.

Who would buy that? Hunter Pence's cousin. Well, "cousin". When he explained it to Citizens Bank Park security after trying to get into the clubhouse, there was some "third cousin", "by marriage", and "once removed" thrown in. But he has the documentation to prove it! (He says.) "How can I be a stalker is we're family!" is the thread he clings to when friends ask him why he trolled the Philly bars after every Phillies home game, looking for Hunter Pence. "I just want to have a beer with him!" His plan to chain himself to Pence's San Francisco bound plane last July was thwarted when airport security got suspicious of a suitcase filled with nothing but yards of chains and several large padlocks and detained him for questioning and an extensive cavity search. Following Pence to San Francisco was a given -- he was family, after all, and he had to be supportive! "IT'LL ALWAYS BE PENCE-YLVANIA TO ME, HUNTER!!" he shouted as Pence's float passed by at the Giants' World Series parade, thrusting out his chest to show off his shirt. Until that moment, he had no idea that confetti, when thrown at one person in large amounts and with enough force, could be painful. 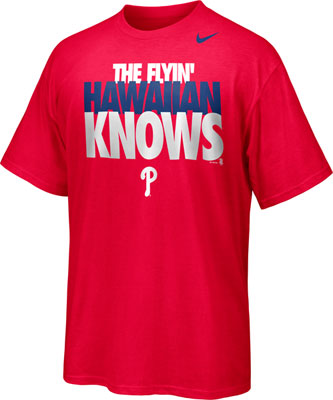 Oh, Shane. I was surprised that when Shane Victorino was traded, I didn't really miss him as much as I thought I would. I never looked at whatever random dude the Phillies had put in center field that day and shouted "THAT'S SHANE'S TERRITORY, AND IT ALWAYS WILL BE!" I wished the Phillies had a better player there, but it's not like the hole to be filled was specifically Shane Victorino sized. I don't miss the Ed Hardy/Affliction douchebag bro couture wardrobe. Nor do I miss his almost aggressive positivity. It always seemed like his tweets were threats in disguise. "You WILL get up and THANK GOD for this day and you WILL RISE AND GRIND WITH YOUR HEART AND SOUL DO YOU HEAR ME?"

And I have no idea where Shane Victorino's nickname, the Flyin' Hawaiian, came from. Did it come from him? The fans? The broadcast booth? Regardless, it accomplishes one of Victorino's main goals: informing people he's from Hawaii. Did you know that he's from there? Because he is! It's not the type of nickname that someone would call him passing by. "Hey, Flyin' Hawaiian, sign my t-shirt!" Or "Hey, how are you doing, Flyin' Hawaiian?" That sounds stupid. It's less of a colloquial nickname and more of a nickname that describes who he is. And the shirt above is a tribute to that nickname. Wait, not tribute. Stating! This shirt is a stating of his nickname, in that it really just has words on it. "The Flyin' Hawaiian Knows." The shirt really is just the most basic thing you can do for a piece of team merchandise. It doesn't have Victorino's actual name on it, or his number, or pinstripes, or even the full Phillies logo. Just a tiny Phillies "P" on a red shirt with words. This is the most boring shirt in the universe, but it gets the point across, and it doesn't make up any new state names or accidentally makes him the ruler of a commonwealth. But it begs the question: what exactly does the Flyin' Hawaiian know? Does he know the weather forecast? Tomorrow's lottery numbers? The date the world will end? The squirrel rallying cry that will bring all the squirrels to him in preparation for their battle to take over the earth with Victorino as their human-squirrel king? Who knows.

The more important question is: Who would buy that? Shane Victorino himself. Sure, he pretends to be all about the Red Sox now, but he's still heartbroken about being traded. "WHY WON'T YOU TALK TO ME PLEASE TAKE ME BACK!" he shouts into Ruben Amaro Jr. voicemail. He never hears back, though Ruben could have been offput by the sobbing in the 91 other messages he's left since August. He sits alone in the dark and watches footage of the 2008 postseason, sipping a Koloa Rum cocktail out of an Ed Hardy glass, eating macadamia nuts and dried pineapple. Sometimes, he puts on his Phillies shirsey or his "The Flyin' Hawaiian Knows" t-shirt and watches footage of the parade. On the anniversary of the parade, he put on the exact outfit he was wearing and had his kids make crowd noise as he reenacted scenes from that day. It predictably ended in tears. Tears and the involvement of the local fire department to get a naked and drunk Shane off the roof of his house.