The 2013 projections from the various systems all result in the same order of finish among the teams of the NL East.

In recent weeks, we've been reviewing 2013 projections from the various systems, and turning them into runs scored and runs allowed by the Phillies in order to estimate a win total.

Recap:
- This translated the Bill James projections to 89 wins
- This showed the ZiPS projections translate to 81 wins
- Here we saw why the ZiPS projections indicate that the 95-win pace in the second half of 2012 is unlikely to be sustained in 2013 (partly because the 95 pace included about 6 wins attributable to luck, but mostly because the pitching will regress)
- Here, we saw what kind of stats individual Phillies would have to deliver in 2013 in order for the team to win 95 games -- in short, nothing miraculous for anyone in particular, but everyone would have to perform at or near their best level of the past 2-3 years (and if they all did that at once, that would be miraculous).
- Finally, here, we reviewed the projections from Steamer (81 wins), and Oliver (88 wins).

Most of these projections are now conveniently available for other teams, and so we can do the same kind of analysis for the rest of the NL East and see how the Phillies compare. The only exception is the set from Bill James, which I don't have access to without copying them one by one for each of 100 or so players in question. However there is also a new set of projections from RotoChamp, which I've included below.

The methodology for the other NL East teams is similar as in the Phillies analyses:
1) assumed that each team would get the same number of PAs by position as they did in 2012, and that the innings pitched by starters, in total, and by relievers, in total, would be the same as in 2012
2) for most positions, assumed that the first player in the team's depth chart would get 90% of the PAs, and the backup would get 10%; for catchers, typically assumed 70% for the starter and 30% for the backup
3) starting pitchers 1-5 were allocated roughly 210-200-200-180-160 innings (more-or-less) to match the innings pitched by the team's total in 2012; the first 5-6 relievers in the depth chart were allocated 70 or so innings each
4) each player's projected 2013 wOBA or ERA is used to generate runs created or runs allowed (with an earned runs to total runs adjustment)
5) a team's runs scored and runs allowed are added up, and then converted to games won using the pythagorean formula.

So, without further ado, the results: 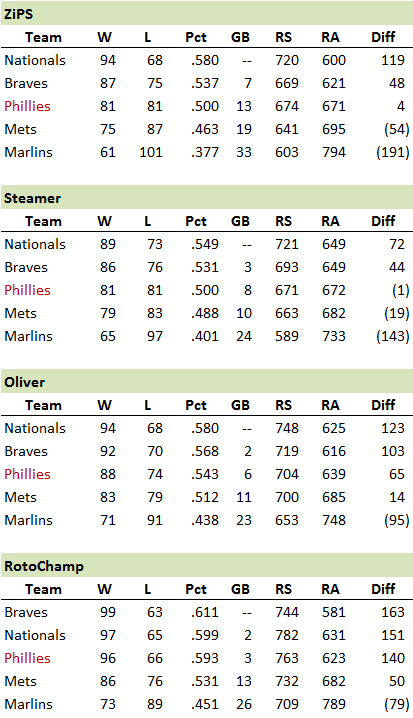 This is very crude, but it's interesting that despite widely varying projections for runs scored and runs allowed from one system to the next, in the end all four systems translate to the same order of finish in 2013.

The RotoChamp projections, which are the only one of these sets we haven't reviewed in detail yet, are interesting (and encouraging) from a Phillies perspective. They include one more very optimistic projection for Darin Ruf (.828 OPS), and also some rather rosy numbers for Brown (.803), Ruiz (.846), Utley (.836), and Rollins (.776).

Below are runs created projections from all the systems. Unusually high or low projections are highlighted green or dark red: 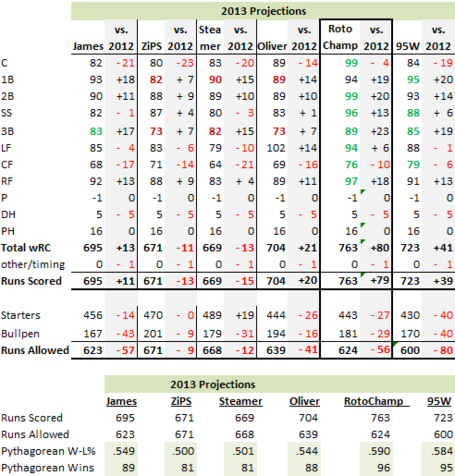