In which the readers of The Good Phight attempt to prognosticate, soothsay, augur, divine, presage and wild-ass guess the outcomes of certain events chosen by a select group of Top. Men. BEFORE THEY HAPPEN!

If you've done this before, you know the drill. If you haven't, below is a list of certain events, each with a certain predefined "expected outcome." Your task is to determine if the event will occur prior to that outcome (under), after it (over), or will not occur at all (never).

Additionally, the Top. Men. have added a few nonstandard events this year, to be adjudicated at the end of the season based on various totals and summations. The details are in the attached table. This message will self-destruct in some number of seconds.

Unfortunately, there will be no prizes awarded this year, as the Top Men (for the record; Wet Luzinski, TwistyWristy and myself) spent the prize money on hookers and blow, but the winners will enjoy the pride of knowing they won a contest with a bunch of anonymous internet strangers! YAYGUYS! 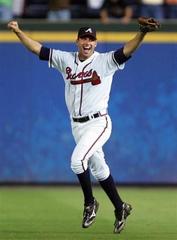 Extra Credit 1: Greater: Number of Phillies' (regular season) wins or Roy Halladay's average fastball velocity in MPH, per Pitch f/x.
Extra Credit 2: Number of attendees to TGP meetup during SABR 43 Conference.
Post your answers in the comment section. Submissions will be accepted up to midnight EST on April 10th; but any events that occur prior to your submission will be disqualified, so get them in ASAP.
Good luck!