In the Spring, pitchers and hitters are getting in shape and working on mechanics and swings, and managers often are more interested in seeing players in certain situations than they are in doing everything they can to win a game. How does all of this affect the spring training stats?

Share All sharing options for: MLB-Wide Spring Training Stats vs. the Regular Season

Scoring
There was 4% more scoring in Florida than during the regular season last year, which can probably be attributed to using the DH more often than the MLB regular season average. However in Arizona, there were 18% more runs scored per PA.

Hitting
In Florida, singles and doubles/triples were higher, but home runs were hit at a 17% lower rate than during the regular season, causing ISOlated power to be 6% lower. BABIP was very close to the regular season average.

Walks and Ks
I would have thought that with minor leaguers getting substantial numbers of innings, and with pitchers working on their mechanics and command, walks would be higher. Not the case. In fact walks were slightly below the regular season average in both Arizona and Florida. Strikeouts were also consistent in the Cactus and Grapefruit leagues, and they were much lower, down 8% and 9% respectively. One other stat not shown below (because it dwarfs all the other bars) is intentional walks -- not surprisingly, there are hardly any in the spring, only about 1/10th the number we see in the regular season.

Stealing
I was surprised to see that steal attempts were quite a bit higher in the spring: 17% more in Florida, and 28% more in Arizona. The success rate in Florida was close to the regular season average, but in Arizona it was much lower, causing runners to get caught stealing at a 79% higher rate on a per PA basis.

Others
Hit by Pitch were much higher in the Spring, which I would have expected, but which contradicts the lower walk rates. Maybe hitters are just not adept yet at getting out of the way ;-). Another expected difference is that there are relatively few sacrifices in spring training. Sacrifice Flies were up, particularly in Arizona, likely due to there simply being more opportunities with runners on third base. 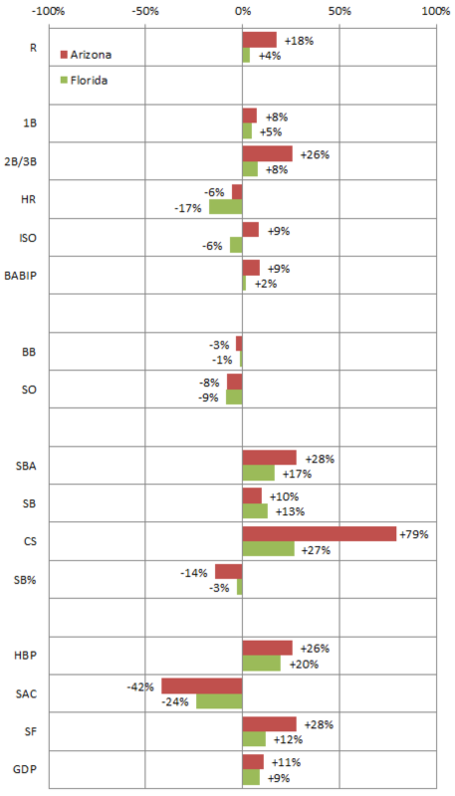 Looking back further, these are the % differences vs. regular season stats in 2009 through 2012: 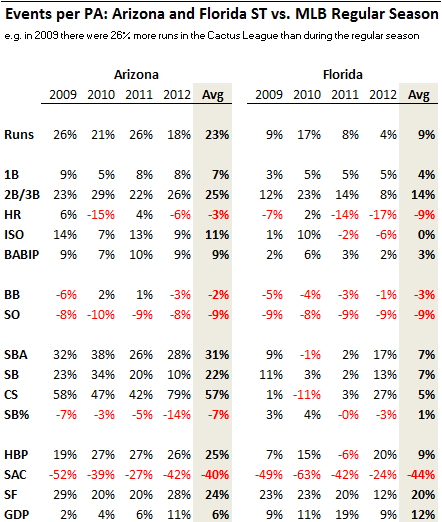