There have been exactly 500 games where a player has hit three home runs.

Share All sharing options for: Random Thought of the Day: 3-Homer Games

At least 500 is the count according to the Play Index feature of baseball-reference.com. Its data starts in 1916, but the first 3-homer game doesn't appear until 1922.

[By the way, this is the wikipedia article on the 16 4-home run games, the last of which was by Josh Hamilton last year.]

Okay, back to the 3-homer games. 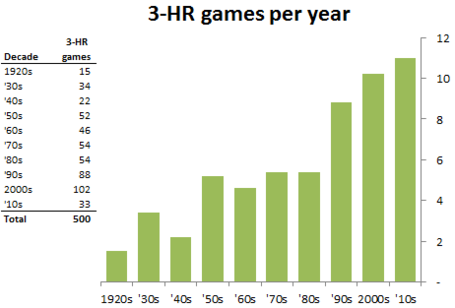 Having a player hit 3 home runs in a game is far from a guarantee to win that game. There have been 87 games in baseball history where having someone hit 3 dingers has not been enough to win the game. Still an .831 winning percentage is quite high.

Looking at these games by position, it's not surprising that the most 3-homer games have been accomplished by first basemen and corner outfielders: 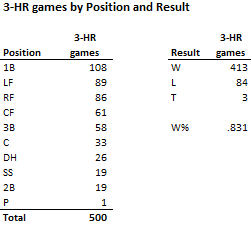 Below are the players with the most 3-homer games. Sammy Sosa and Johnny Mize had six each, and then Dave Kingman, Mark McGwire, and Joe Carter had five each. In addition, Carlos Delgado and Lou Gehrig each had four games with 3 homers, as well as one with 4, giving them a total of 5 games with 3 or more home runs: 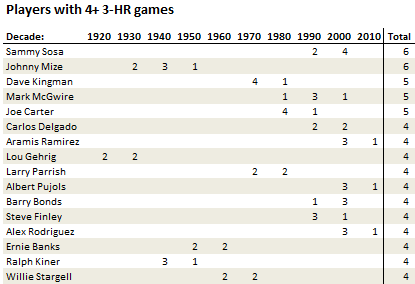 The Phillies have had 19 3-HR games, with 2 each by Mike Schmidt and Johnny Callison leading the way. The list below also includes the two 4-homer games, by Schmidt and Chuck Klein: 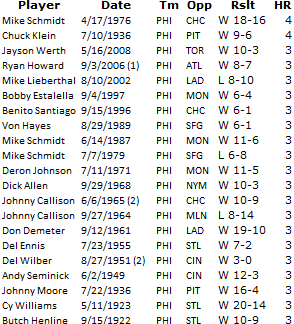