It was never going to happen, but based on the starts of both player's seasons, it's worth a revisit.

Share All sharing options for: Revisiting The "Proposed" Lee/Upton Deal 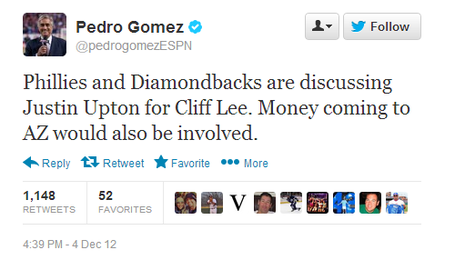 In probably what was nothing more than winter meetings speculation that traveled by word of mouth, Pedro Gomez (and only Pedro Gomez) tweeted on December 4th of last year, that the Phillies and Diamondbacks were feverishly working on a trade that would send Justin Upton to the Phillies for Cliff Lee. Naturally, the internet exploded in response to the rumor. Pedro Gomez was the match that was thrown on the gas line, igniting a firestorm. The trade at the time (and even now), made a lot of sense. This supposed rumor began before the Phillies traded for Ben Revere, and before the strong spring of Domonic Brown. Not only in desperate need of an offense, the Phils were in desperate need of an outfield. Justin Upton would have given the Phillies that right-handed outfield bat that would had given some pure credibility, to their current young and unproven outfield.

What it also would have done however, was sap the Phillies of their once potent starting rotation. Cliff Lee for the past three seasons, has arguably been their most consistent starter. Cliff is no stranger to trade talks...Traded to the Phillies in 2009, traded from the Phillies in 2009, and finally traded from the Mariners in 2010. Cliff thought with his 5 year deal with the Phillies that it would be over. Amid the Phillies trading of Shane Victorino and Hunter Pence, coupled with the Dodgers picking up the salaries of Adrian Gonzalez, Josh Beckett and Carl Crawford...rumors spread that the Phillies would send Lee to the Dodgers in an August waiver deal. Luckily, that never happened and just like this supposed D'Backs deal, remained a strong rumor.

But we won't talk about the Dodgers deal, which would have been nothing more than a salary dump plus a modest prospect in return. The Diamondbacks supposed trade, would have netted them arguably the hottest player in baseball right now. So where would both teams stand?

Currently, Justin Upton is off to a torrid start that comparable to those of historical measures. In just 8 games, Justin Upton has 6 home runs with an OPS of 1.100. Compare that to the entire Phillies team, who has only 7 home runs (all from 7 different players). There's doubt that Justin Upton may be playing with a chip on his shoulder, after finally being dealt after years of speculation. Kevin Towers is looking like a total fool currently, getting marginal production out of other trade centerpiece Martin Prado. There's no doubt that Justin Upton would look fine as the 3, 4, or 5 hitter in this Phillies lineup.

Cliff Lee through two starts, has undoubtedly been the Phillies most consistent pitcher. After failing to pick up one of those illusive, totally meaningful wins until July of last year, Cliff Lee already has two of them this season. Pitching to a 2-0 record with a Cliff Lee-like K/BB ratio of 14/0, Cliff Lee's ERA of 1.08 is a godsend, when compared to the rest of the pitching staff's combined 9.68 ERA. Cliff is no doubt off to yet another Cy Young-caliber start.

Which leads me to why would not have traded Cliff for Justin Upton. Sure, I could just say "you can never have enough pitching", but it's beyond that. Why wouldn't I pull a trigger on an Upton/Lee trade? The same reason I wouldn't have sent Lee to the Dodgers. Because at the time, and especially now, you didn't know what you had with Roy Halladay. Flash forward to April 10th, 2013...you still don't know what you have with Roy Halladay. Sure Justin Upton would look amazing in Phillies pinstripes, but at the cost of having your rotation one-through-five look like Cole Hamels, Roy Halladay, Kyle Kendrick, John Lannan and Tyler Cloyd?

I'll take my chances with a more potent rotation.