Roy Halladay earned his 200th win and the Phils dodged the ignominy of a series loss to a wretched Marlins team.

The 2010 San Francisco Giants featured a great pitching staff and an offense that tended to go ice cold for extended stretches. So it wasn't surprising that they played a lot of low-scoring, close games that weren't decided until the late innings. The team's fans got into the habit of describing Giants games as "torture," which also might have referred to the team's decades without a championship despite some absurd near misses.

Putting aside the questionable taste of jokey references to torture given recent geopolitical goings-on, Giants fans saw their pain paid off when the team scratched into the playoffs, then blitzed through the postseason--including an upset NLCS win over the Phillies--and finally brought home their first title since moving to California. Needless to say, a lot of those tense games ended well for the G-Men.

On a percentage basis, I guess we're forced to say the same about the Phillies' weekend in South Florida. In all three games, the score was 1-1 going into the ninth inning. We won two of them. Yay?

Yay. The hero Sunday was pinch-hitter Laynce Nix, who came off the bench with one out in the top of the ninth to launch an upper-deck homer off Marlins reliever Jon Rauch, breaking the tie and earning Roy Halladay his 200th career win. Jonathan Papelbon closed the door in the ninth, despite a fates-tempting leadoff walk to Placido Polanco less than 24 hours after Phillippe Aumont did the same to set up Miami's lone win of the series.

Beyond the question of whether the Phils could take a series against a Marlins team that might challenge the 1962 Mets for all-time futility, the question Sunday was whether Halladay could reassert himself against a wretched Marlins lineup missing Giancarlo Stanton and Austin Kearns. The answer was a solid Yes, as Doc threw eight strong innings of one-run ball. He tossed 87 pitches, 56 for strikes, and set Miami down in order four times. Though he only struck out two, he held the Marlins to five hits (four singles) and a walk. Even allowing for the weakness of the opponent, he was more assertive in attacking the strike zone and mixing his pitches.

The problem was the Phillies' stunning offensive futility against starter Kevin Slowey and a passel of Fish relievers. They had chances in virtually every inning, but kept finding innovative ways to strand runners. Chase Utley alone left seven men on base. The most effective Marlins reliever was--and this is almost as galling to write as it was to watch--Chad Qualls. The Phils' erstwhile Inflammable Man came on with two on and one out in the sixth, and needed one pitch to induce a double play from Humberto Quintero--one of four the Phils hit into Sunday. He then set them down in order on about nine pitches in the seventh.

But in the end, the proper order of things reasserted itself: the Phillies claimed a badly needed win to return to .500, and Halladay earned a milestone victory while showing signs he might yet be able to emerge as the solid #3 the team will need if they're to contend this season. 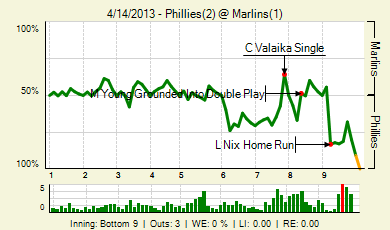