The Pirates, winners of three straight, come to CBP for yet another four-gamer.

Share All sharing options for: Pirates at Phillies Series Preview

A four-game series split wasn't the worst possible result from the Phillies/Cardinals series. There were several good takeaways, but there were plenty of not-so-good takeaways. The Phillies' outfield offensive woes continued, Chase Utley had more than a few defensive miscues, and Chad Durbin pitched in yet another game. Oh well, it's time to move forward and look ahead to yet another four game series, this time with the Pirates: 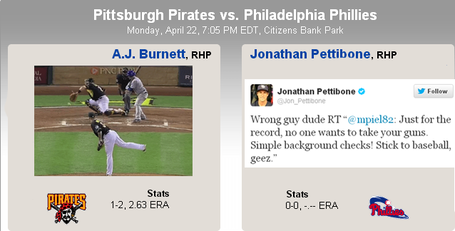 AJ Burnett and Wandy Rodriguez the Phillies futile lineup will have naturally have trouble with. PNC Park has always been a house of horror to the Phils, but so has CBP when it's come to the usually lowly Pirates.

The biggest story of this series is tonight's game, in which Phillies prospect Jonathan Pettibone makes his major league debut in place of the injured Jonn Lannan. His control and velocity remind me a lot of Vance Worley, which should make some fans happy. Pettibone's MLB ceiling is more than likely a #4-#5 starter, but that's more than enough with what the Phillies currrently have and what may be on the way.

In terms of their offense, the Pirates rank 21st in runs, 25th in batting average, 21st in OBP and 26th in slugging. Compare that to the Phillies ranking 20th, 14th, 24th and 19th respectively. All-Star Andrew McCutchen is producing as usual, albeit without a lot of power. The Pirates in general lack power, but Neil Walker, Starling Marte and Andrew McCutchen need to be feared when going 1 through 9, as per usual.

Thoughts going into this series? Will Ben Revere get on base? Will Dom Brown start hitting like spring? Will Chase Utley remember how many outs there are?