Scouting Jimmy Rollins as a high-school player in 1996

In March of 1996, the Phillies sent scout Bob Poole to check out one James Calvin Rollins, then a senior at Encinal High School in California. What did he see?

Share All sharing options for: Scouting Jimmy Rollins as a high-school player in 1996

On Wednesday, April 24, 2013, I went to see the Phillies and Pirates at Citizens Bank Park. I exploited what Wet Luzinski called, "the soft underbelly" of the ticket market for a mediocre Phillies team during a school night, and I scored Hall of Fame tickets from StubHub for $36.00 per. I could have bought cheaper tickets, but StubHub makes it easy for me, and I'm all about easy.

One of the cool exhibits that I encountered is the original scouting report for one James Calvin Rollins of Encinal High School in Alameda, California, circa March 9, 1996. Click to embiggen it. I could not get the whole thing in focus, so squint your eyes hard at the fiddly, wavy bits. 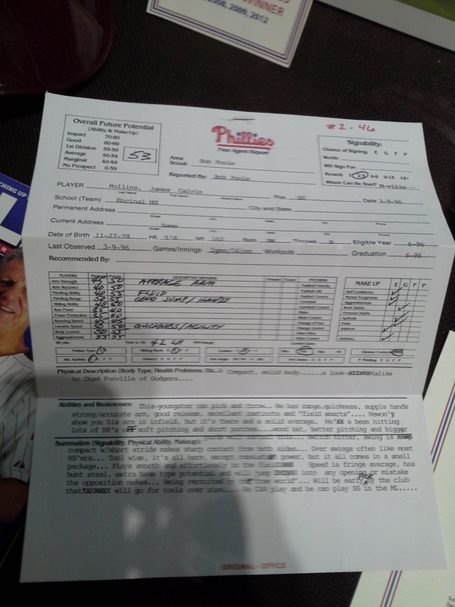 So how did the best shortstop in the history of the Phillies grade out? Jimmy Rollins was a 53, which put him in the "Average" category. It is truly a delightful read:

He was projected to go in rounds 2 - 5 and was being recruited by "the free world" and had a body comparable to Chad Fonville of the Dodgers. No, I had no idea who he was, either.

His speed is described as "fringe speed" and is predicted to be an early pick by a team that will go for "tools over size..." He was to start in M-ville (Martinsville, VA).

Over 14 innings and 2 games, the observations were all mostly "Excellent" on "Make Up" except for 'Work Habits" which was only "Good". I guess he was Strollins then, too. RED FLAG!! Seriously, what the hell can someone learn from 2 games and 14 innings on a player's work habits? (BUT: see below on the length of time Rollins was scouted.)

Some additional information about the scouting that Poole did on Rollins is available here. It is worth a read. Poole was apparently a believer in Rollins early on during his freshman year. Rollins was ultimately drafted in the second round by the Phillies and made his way pretty quickly through the system, but not without some bumps, described here, in a Baseball America write-up during 2000 on the Phillies' top 10 prospects. Nevertheless, he did pan out and debuted in Philadelphia in 2001. An Inquirer article from 2002 discusses some of Rollins' scouting and development history, including talking to Poole, who was then working for the Astros covering central and northern California.

Whether there is current relevance or not from a player identification and drafting standpoint, it was a cool thing to see. I figured I would share it with the audience here, not just for those interested in Jimmy Rollins, but for the rest of us who wonder how the Phillies scout and evaluate players.