Key Phillies stats for 2013: what are they doing better or worse than last year, and how do they compare with the Mets?

Welcome to the inaugural Stat Notes of the 2013 Season. The categories shown below are essentially the same as those I tracked last year, but I am open to suggestions for adding/removing things, especially if they're easy.

I may add more commentary later, but for now I offer the stats below.

Clearly nothing to write home about there so far. xFIP is around the middle of the pack -- yay! Note the difference between batting average (not terrible) and OBP (terrible).

Overall
- So, the Phils' pythagorean record is ranked even lower than their actual record.
- And the Mets may have played slightly better than their record suggests.

Offense
- The Phils are in the bottom third in the NL in the large majority of offensive categories
- Like last year, they are not drawing many walks, but the difference is that this year they are also striking out a lot. Not a good combination.
- One odd bright spot: they are the 3rd most successful team so far at advancing runners on second base with none out.
- Meanwhile, the Mets are off to a hot start, leading the NL in scoring over the first three weeks.

Pitching
- Both the Phils and Mets are near the bottom in pitching in the early going.
- Two positives for the Phillies are that both Cole Hamels and Roy Halladay have looked strong in recent starts, and their starters' xFIP is good for 4th in the NL. 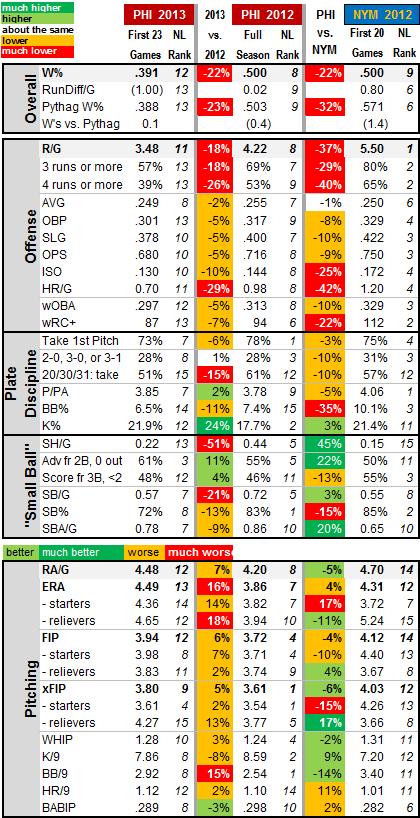 The Phils have one of the worst records in the NL so far, and both the offense and pitching have the rankings to show they've contributed. The Mets show a lot of green, hitting even better than the vaunted Braves' offense in the early going. 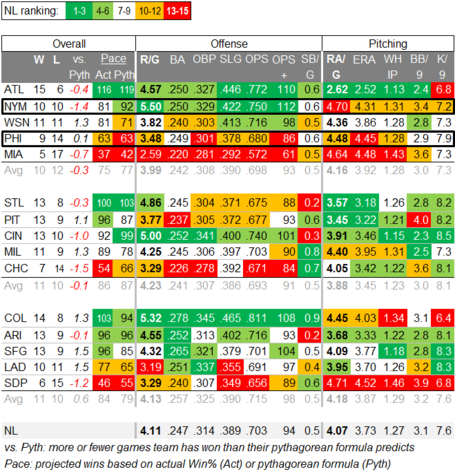