The Phillies finished their first sweep of the season behind six innings of one-run ball from Cole Hamels and late offense highlighted by Ryan Howard's pinch-hit two-run double.

It's almost never easy for Cole Hamels against the New York Mets, or for the Phillies against Mets lefty Jon Niese. So it was again for much of Sunday afternoon's game, as Cole surrendered a first-inning run on two hits and then battled his command, issuing six walks through the ensuing five innings. Meanwhile, the Phils couldn't muster a hit against Niese until the fourth and didn't crack the scoreboard until Freddy Galvis tied the game with a fifth inning solo homer.

With two outs and none on in a 1-1 game in the top of the seventh, Hamels was done after throwing 111 pitches through six. Having used every righty bat at his disposal other than backup catcher Erik Kratz in the lineup against Niese, Charlie Manuel had to call upon Laynce Nix to hit for Hamels. When Nix popped up a Niese offering in foul territory to the third base side of the plate, it looked like Hamels would finish April without a victory to his name. But Mets catcher John Buck dropped the pop-up, and moments later Nix took a Niese offering the other way for a single. Now over 100 pitches, Niese got into a deep battle with Jimmy Rollins, who worked the count full and fouled off a number of pitches before singling to nearly the same spot, putting men on first and second.

Remember how I mentioned all the righties were already in the lineup? Ryan Howard's career numbers against Niese are horrific--1 for 15, 7 strikeouts--so the Big Piece sat today despite his recent hot bat. Kevin Frandsen was playing first and batting second. With Niese at 117 pitches, Mets manager Terry Collins went to the bullpen, for reliever Scott Atchison. Here came Howard, with his unfathomably great career pinch-hitting numbers: 15-37, 6 homers. Make it 16 for 38, as Howard blasted a double off the center-field fence that scored both runners and gave the Phillies a 3-1 lead. Chase Utley followed with a single to score Howard, and Hamels suddenly was the pitcher of record on the good side.

An inning later, the Phils stretched their lead to 5-1 as Domonic Brown singled and scored on a John Mayberry Jr. double. The bullpen did the rest, as Antonio Bastardo, Mike Adams and Jonathan Papelbon held off the Mets the rest of the way.

As you might have heard, Carlos Ruiz made his return on Sunday, and registered his first base hit of the season with a double in the fifth. He also caught eight Hamels strikeouts. 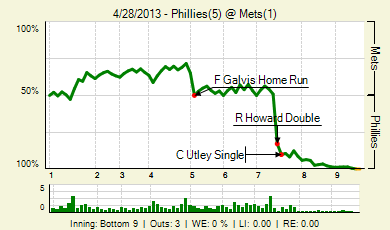